Witnesses are bad for crime, so streets packed with potential witnesses are not good settings to commit one, even if it is at night.

This is one of the many factors that combine to help keep South Philadelphia’s crime rate as low as it is, specifically in the area around East Passyunk Avenue which is safer than the areas to the east, west, or south. 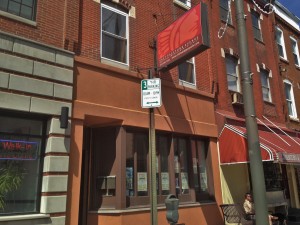 Renee Gilinger, executive director of the East Passyunk Avenue Business Improvement District, explained that all the outdoor dining and businesses open late encourage people to be out at night, discouraging others from acting uncivil.

“Eyes on the street is definitely a great crime deterrent,” she said, adding that public places like The Singing Fountain can remain popular all evening and are great for safety.

The Mifflin Triangle on East Passyunk Avenue (not to be confused with Dunder Mifflin’s Triangle Tablet) and the “gateway” to the avenue  will both be seeing improvements in the coming weeks in an effort to make them more attractive and well-lit for passersby and residents alike. 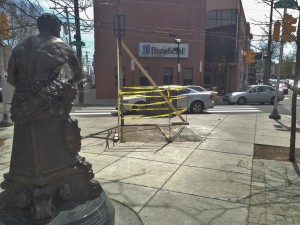 “Open space is not easy to come by,” Gilinger continued. “I love how we have little pockets” of it.”

Some citizens take their crime deterring street-eyes even further, helping to proactively watch for crimes and notify both residents and the proper authorities.

Taking Our South Philadelphia Streets Back (TOSPSB) is only a few years old but is active on various social media sites to notify South Philadelphia residents of not only crimes, but of lost or found animals, safety hazards, and other civic events.

Carol Lanni, founder of TOSPSB, said that while crime stats have gone down, the biggest improvement due to the page she founded is that people are more aware of their surroundings.

“We lived in a false sense of security before, people weren’t sure of what was happening right under their noses,” Lanni explained. “I think that they’re getting more involved, and police like it because the community is involved and they’re getting their back up.”

TOSPSB is a big supporter of the police department, and Lanni said that police officers on the page also work to let TOSPSB know when something is wrong or how to improve it.

“There’s good and bad in everything,” Lanni said. “Criminals don’t have a sense of race, creed or color. They come in all shapes sizes and colors.”

She said that recent events may have given some police a bad reputation but that they still need the public’s support.

Though the page is strictly volunteer, it does operate 24/7 with somebody always listening to a monitor and scanner for crimes.

Other neighborhoods have mimicked the style of the page to bring their own communities together for awareness and safety, Lanni said, which she feels is beneficial to continue the decrease in crime in Philadelphia.

“Working together will get us further,” Lanni said, speaking on the need to expand this type of community awareness programs throughout Philadelphia. 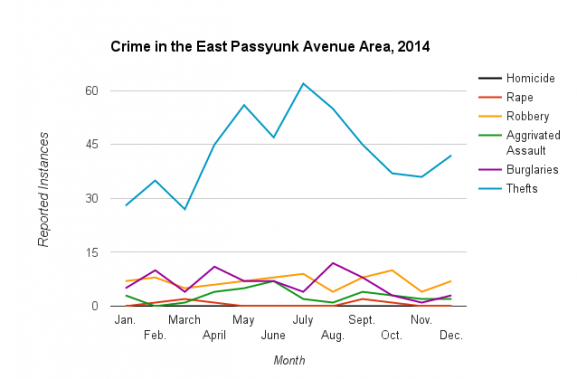 Despite summer drawing the most people out though, it is also the most popular season for crime, as seen in the graph to the right composed of data from PHL Crime Mapper. Though crime in general is comparatively low, and homicides remain at zero all year, thefts and aggravated assaults seem to raise with the temperature. However, this is not due to a lack of protection.

The South Philadelphians are not doing this job alone though, over the summer the Passyunk Business Improvement District will also help to put together a police force over the weekends to ensure that the people enjoying the avenue’s nightlife remain safe.

The need for this force was first realized a few years ago when Gilinger would come back to her office Monday mornings to multiple complaints about various “shenanigans” having taken place over the weekend. The incidents were largely nonviolent, like plants getting knocked down, but were shenanigans that needed to be handled nonetheless.

Gilinger said that she then saw a significant, “almost immediate” drop in the shenanigans that were occurring.

This summer police force, which is in its fourth year, will run over the summer to at least Labor Day Weekend, Gilinger explained, though it may be extended due to good weather if people continue to frequent the avenue in the increased numbers. The force will operate Fridays and Saturdays from midnight to 3 a.m., spending the last hour outside Pat’s and Geno’s steakhouses where people gather later at night.

“Once you have a system in place,” Gilinger explained, “it becomes easier to expand its protection abilities.”

Gilinger also added that the local beat cop’s coverage has been expanded when necessary in the past.

“He’s always here later on Second Saturday and other events,” she said. 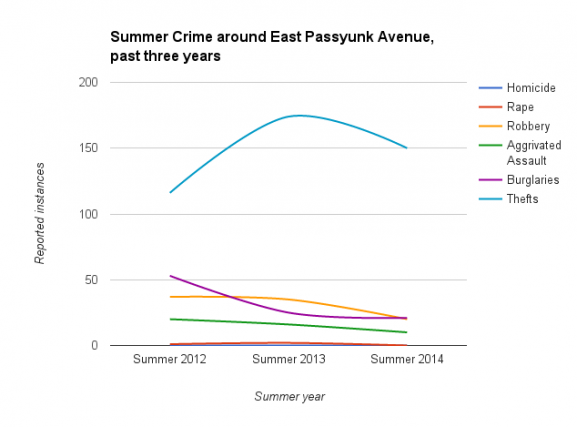 Over the past three summers, most crime has been going down in the East Passyunk Avenue Area. Despite a spike in thefts in the summer of 2013 compared to that of 2012, the data collected by PHL Crime Mapper shows a significant decrease in all other aspects, besides homicides which have remained at zero and the drop in robbery from 2012 to 2013 being fairly slight, but still existent.

Today, residents believe they live in one of the safer parts of the city. Justin Steinberg, who has lived around Passyunk for one year but lived in Bella Vista for four, said that he feels he moved to a slightly safer area.

Steinberg added that while he has not noticed the summer police on Passyunk (he said he does not go out that much), the increased police presence on South Street does make him feel safer when he goes there. Steinberg also added that while he feels Passyunk is safe, the “going too many blocks east or south, or crossing Broad Street,” would be slightly less so.

According to this interactive map on Newsworks.com, Steinberg is just about right. Using data from the Philadelphia Police Department, it shows the crime rate of small neighborhoods in 2013, and how it changed from the previous year.

The chart shows that the area surrounding East Passyunk Avenue, while not the safest in the city, is significantly safer than other parts of the city- including the areas below Mifflin Street, past South 8th Street, and across Broad Street, as Steinberg thought.

Gilinger, who despite working on East Passyunk for years lives in the Graduate Hospital area, also said she feels safer around the avenue than she does in her home district, though she thinks both are improving.

Gilinger also said that despite the relative safety of the area, everyone should always be alert and aware of their surroundings in any part of the city as a precaution.

– Text and images by Josh Levy.

Arts & Entertainment: MAP And Philly Writers Paint Their Own Paths

In reaction to an increase in graffiti in the 1980s, the Philadelphia Anti-Graffiti Network was created to eradicate the artwork from the city’s buildings, trains, bridges and anything else that graffiti artists – properly known [continue reading…]

The first town hall meeting was called together by the Philadelphia 300 Men Assembly, co-founded by Donnell Regusters and Tommy Joshua. The purpose of this meeting was to hear the issues the community is dealing [continue reading…]