Sarah Orgass has never had an easy relationship with her father, and recently it’s become more difficult because of his dementia.

But then his doctor suggested ARTZ Philadelphia, a program that offers a creative outlet for those with dementia and Alzheimer’s disease. And that has changed everything, said Orgass.

“I wasn’t close to my father before his dementia progressed and did not have many happy memories with him in general,” Orgass said. “The ARTZ programs completely re-wrote that narrative for us, and it allowed us both to see that a dementia diagnosis does not have to detract from a person’s quality of life.”

ARTZ Philadelphia founder and executive director Susan Shifrin started the nonprofit organization in 2013 to try to dispel what she described as “negative stereotypes” surrounding Alzheimer’s. Art created in the program – including paintings, weavings, drawings and ceramics – was displayed last month at Chestnut Hill College in an exhibit called “Seeing Hope In Color.” 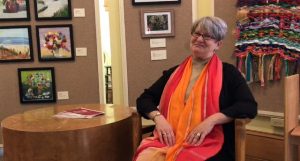 Shifrin (right) estimates that more than 100,000 Philadelphia residents have the disease, which erodes memory functions. Adding in dementia patients and their caregivers, she said 200,000 to 500,000 Philadelphians are affected by dementia and Alzheimer’s. Nationwide, about 5.4 million people have Alzheimer’s, according to the Alzheimer’s Association.

ARTZ Philadelphia – the “Z” comes from the letter in “Alzheimer’s” – is the first Mid-Atlantic affiliate of Artists for Alzheimer’s, an initiative of The I’m Still Here Foundation, which is based in Woburn, Massachusetts.

Shifrin discovered the artistic group while serving as associate director of the Berman Museum at Ursinus College outside Philadelphia. Shifrin brought the co-founder of Artists for Alzheimer’s to the museum to train Shifrin and her students on how to offer art to Alzheimer’s patients. The results, she said, “were brilliant.”

“I really started to see a connection between the patients and the art they were creating,” Shifrin said. “As they were working on the art, I noticed their minds racing. … I knew there was a direct connection. They could really express themselves and use a lot of creativity while creating the art.”

Shifrin later left Ursinus and now focuses on ARTZ full-time. She went on to explain that Chestnut Hill is the center for much of the work ARTZ Philadelphia does; however, the organization works throughout the greater Philadelphia region.

According to Shifrin, ARTZ programs are offered several times a month for patients and their caregivers at partner museums, adult day care centers and local residential communities serving those with Alzheimer’s and dementia. About 1,000 people participate, she said.

Celia Morrison, a 23-year-old volunteer coordinator for ARTZ Philadelphia, met Shifrin while pursuing her philosophy degree at Ursinus. Shifrin had curated an exhibition there focusing on making art more accessible to people with disabilities.

“It suddenly seemed obvious that everyone should have access to experiences with the arts, and I have loved ones who are living with dementia,” Morrison said. “Susan’s mission resonated with me personally and ethically.”

Orgass said both she and her father are grateful for the program.

“ARTZ Philadelphia creates an environment where we all can bring our talents to the table and make something new,” she said. “ARTZ was a great way for my father and I to connect with new friends and do something together.”

– Text and images by Delia Franchi

Behind the 18th century home of merchant John Wister and his family exists a garden, a weather station, a bee house and most recently, a hoop house. The hoop house, or high tunnel, was given [Read More]