Roosevelt Boulevard, the parkway that connects Northeast Philadelphia to the rest of the city and handles some 90,000 cars daily, has a reputation as one of the most dangerous roads in the country. Residents, commuters, visitors and even government agencies have all stated that the road is generally inconvenient and unsafe for everyone who uses it, whether they are traveling by car, bus or on foot.

Built in the early 1900s, the Boulevard as it has come to be known, has been the subject of study after study, conducted with improvements to the long stretch, and width, of the road in mind.

Yet when asked, those who live or work by the street had an answer to the “problems on the Boulevard” question that makes the situation far less easy to solve, and far more simple to understand.

The problem, they say, is the people.

“Aggressive drivers are the biggest problem,” said Deena Gross, an employee at a Verizon store located just off of the Roosevelt Boulevard and Red Lion Road intersection. “The speed limit on the road is 45, and sometimes I don’t even realize it, and I’ll be driving 60. And people are passing me.”

Gross takes the Boulevard to work every day, and has for the past six months. To leave work, she makes a left turn from Red Lion onto the Boulevard.

“It’s terrifying,” she said. “I don’t think you’re ever going to get people to stop driving aggressively. That’s just the way it is around here.”

“You’re taking a hell of a risk, walking across the Boulevard,” said William J. Jackson, sales manager at Gordon Chevrolet on the Boulevard, who drives to work on Roosevelt Boulevard.

Robert Singleton (below), another Gordon Chevrolet employee, agreed with Jackson. 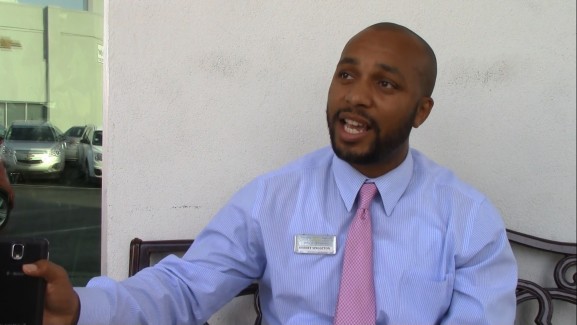 “It’s not safe at all,” said Singleton, who also commutes to work by car on the Boulevard. “Sometimes people run red lights. I never walk across the Boulevard on foot. I’ll get in my car and drive.”

In 2014, the City of Philadelphia Streets Department applied for and received a $2.5 million Transportation Investment Generating Economic Recovery (TIGER) grant. The grants, which are set aside by the US Department of Transportation, are designated for cities to use in order to benefit “safety, economic competitiveness, state of good repair, quality of life and environmental sustainability,” according to the TIGER information page.

The grant application states that between 2008 and 2012, there were 3,468 crashes on the Boulevard, resulting in 49 fatalities.

Nobody interviewed ever suggested that the government could improve conditions on the Boulevard. More than that, when informed of studies that had been conducted and proposed solutions, reception was generally lukewarm at best.

“I think if the government was going to do anything to fix the situation on the Boulevard, they would have already,” said Ji’yonnah Singelton (no relation to Robert), a Verizon employee who commutes via bus from her home on Bustleton Avenue to work every day.

Steve Wasserman, who uses SEPTA on the Boulevard every day, also placed some of the blame on pedestrians rather than just drivers, keeping with the theme of people being the real danger.

“Let’s be honest,” he said. “If it’s 2 in the morning, and you’re wearing all black, and you’re trying to run across the Boulevard, and somebody doesn’t see you in time, whose fault is that?”

“There’s always debris on the crosswalks,” said Singelton. “It could be from accidents, or dirt and rocks from construction, but there’s always something there. And when you’re crossing, the times are short. So when people try to chance it, I think that’s why a lot of accidents happen.”

“I’d say there’s been a shift,” said Wasserman, “maybe in the past 15 years, where people’s tolerance isn’t what it used to be. Fifty years ago, you’d never heard of something called ‘road rage.’ And I don’t think it’s because there’s more cars on the road. I think people just aren’t even being taught tolerance anymore.”

Finally, Wasserman recalled one of his more upsetting moments commuting on the Boulevard, when he witnessed a car attempt to cut off a funeral procession while waiting for his bus.

“The courtesy is, you let [the procession] go,” he said. “Yet there was almost an accident because this one guy, either he didn’t care or he didn’t see, and almost slammed right into them.”

As Holmesburg, Mayfair and other neighborhoods along the Frankford Avenue business corridor work to keep methadone clinics from opening in their communities. Pennsylvania Rep. Kevin Boyle, D-172nd, held a hearing Wednesday at the Mayfair Community Center [continue reading…]

https://vimeo.com/24965905] Professor Roger Barth of West Chester is not your ordinary chemistry professor. The name of one of his West Chester University classes is called “The Chemistry of Beer.” Yes, that brewed alcoholic drink that [continue reading…]