The Papal visit had some businesses stressing out about the crowds and disruptions – even Wake Up Yoga in Fairmount.

While normally offering a variety of weekend classes to help people relieve stress, the facility only be offered a 10 a.m. class on Saturday and no classes on Sunday.

Student manager Alane Goldberg believed this was the easiest solution.

“It would be impossible for some of our students to get to the facility,” she said. 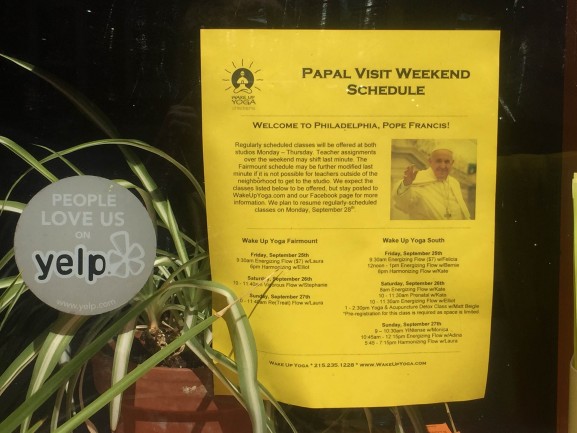 However, there were some positive aspects of the weekend for her.

“Most people are glad we are at least able to offer one class,” she added. “It’s a relief to finally have this weekend come because students have been asking about it for several months.”

Not only has Goldberg found this weekend difficult but some of her students and most prominent yogis have as well. Being in a bustling city can cause a lot of stress and many students find yoga a soothing way to let go of it.

Maureen Zdanis, a yogi for about 13 years, decided to leave for the weekend.

“Yoga helps me stay in shape and slow down and remember how important self-care and my relationship with myself is,” Zdanis said.

However, with the weekend flu of commotion, Zdanis left the city to visit family.

Nonetheless, a few students stuck around and worked with the abbreviated schedule.

Elizabeth Harvey feels like the benefits of yoga are just too great to pass up.

“It keeps my head calmer,” she said.

Harvey has been a regular yogi for the past five years. She finds that it has helped her better deal with life in the city.

“I walk to/from work and as a pedestrian, I would often get pretty angry by the time I reached my destination because of the ‘all about me’ drivers and cyclists on the sidewalks,” Harvey said.

While she still can get mad, she has noticed a significant change since beginning yoga.

“I still get fired up on occasion but I feel like the yoga has helped calm me down,” Harvey said. “I also feel like I am more aware of my breathing and posture.” 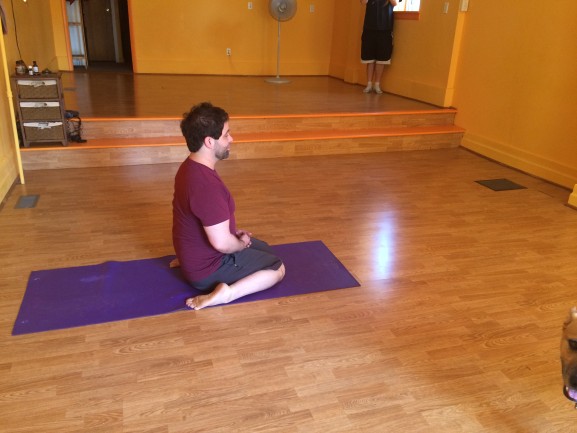 The person who did the most yoga this weekend was Elliot Polinsky. Polinsky teaches at the Fairmount studio and enjoys every minute of it

“I feel like yoga is a really positive thing,” he said. “It’s lovely to be able to spend so much time encouraging something that I believe in. I mean, I enjoy what I do every day.”

Yoga classes at the Fairmount studio will resume their regular schedule on Monday. Due to the stressful nature of the weekend, Goldberg believes there could be an increase in people attending next week.

“With everything being so hectic this weekend, it’s definitely possible that more people will attend next week in order to relieve stress,” Goldberg said.

– Text and images by Nathan Grubel and Matt Bernardini.