Last week, members of the Catholic coalition Equally Blessed came together to introduce members of their pilgrimage to Philadelphia’s World Meeting of Families (WMF).

Equally Blessed fights for both recognition and equality for LGBTQI (lesbian, gay, bisexual, transgender, queer and intersex) persons and their families within the Catholic church. The coalition consists of the four organizations Call to Action, DignityUSA, Fortunate Families and New Ways Ministry, all of which work to broaden the church’s sense of inclusion and aid Catholic LGBTQI individuals. 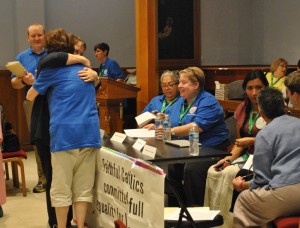 The introduction to the Equally Blessed “pilgrims,” as they are called by the coalition, was both hopeful and emotional.

“They were willing to sacrifice the good of children to prejudicial beliefs”, said Marianne Duddy-Burke, executive director of DignityUSA. “They maintain it is better for children to be in impermanent. Transitional situations then to have the benefits that come with being part of a stable loving family.”

Two other pilgrims, Margie Winters and Andrea Vettori arrived at WMF in hopes of spreading the word about discrimination in the workplace. Winters lost her job as director of religious education at Waldron Mercy Academy after eight years when parents began complaining about her “lifestyle.” Her wife Andrea Vettori spoke about the importance of recognizing marriage equality, as dismissing it only hurts devoted members of the community.

“During this week, in which the Church highlights the blessing that marriage can be, especially when lived in the context of one’s faith, we come to stand as witnesses that as God’s love knows no gender,” said Vettori. “Neither should ours.”

Nicole Santamaria, a pilgrim from El Salvador, aimed to broaden the discussion of hardships faced by intersex individuals. As an intersex woman Santamaria has faced untold challenges in her home country which led her to form an association for transgender and intersex people across El Salvador. Santamaria has survived three attacks against her life due to her work, the most recent being last April.

“I’m hoping to hear words of love, not destruction,” said Santamaria in her closing remarks. “Let’s work to create the Lord’s kingdom here.” 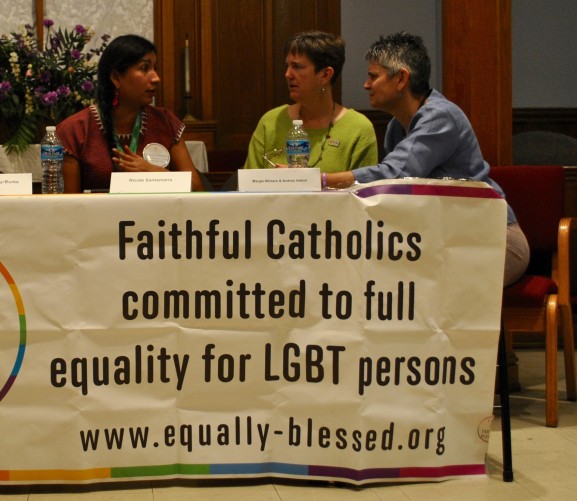 Pope Francis has been the first pope to speak encouragingly to the LGBTQI Catholics, most notably in his open acceptance of gay clergy men. However, Equally Blessed has not had much approval at the WMF. About a month prior to the event, the coalition was evicted from St. John the Evangelist parish where they were to hold a conference on gender identity.

“We don’t want to provide a platform at the meeting for people to lobby for positions contrary to the life of the church,” Archbishop Charles Chaput said in a message to the media concerning the eviction.

After the news of the cancelation, Equally Blessed turned to the Arch Street United Methodist Church where they were welcomed with open arms. 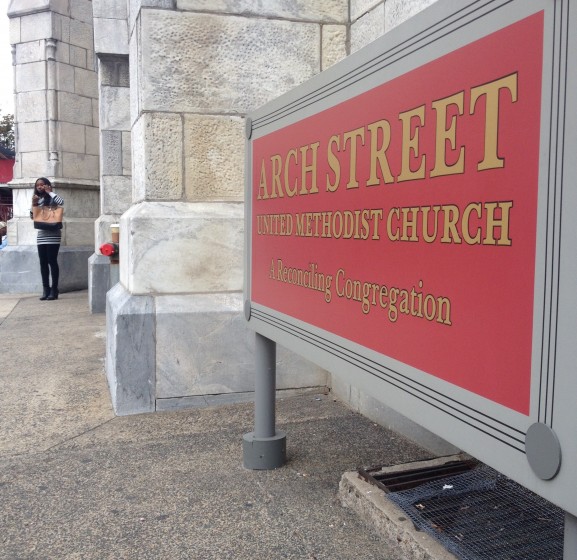 Equally Blessed hoped to stir up the conversation behind LGBTQI issues and acceptance during the WMF. They wish to broaden the discussion to topics including gender identity, workplace discrimination and parenting of LGBTQI youth.

– Text and images by Claire Johnsen and Michelina Pratel.