When his life lost control, he found running.

David April of Fishtown went out for a run one day in 2007 to distract himself from his recent divorce. He only ran for a block, but that was not enough.

“I enjoyed it so much, I decided I wanted to run a 5K,” April said.

April started training with the help of his friend Eric Fielder, also of Fishtown. They organized a variety of runs throughout the city to train and prepare.

It wasn’t long before they got their first post-run beer. Fielder had mentioned a study they were interested in testing.

“We passed a bar and decided to just stop in and try it out,” April said.

The study, conducted by professor Manuel J. Castillo (affectionately referred to as just ‘the professor’ by the runners), showed that beer helps rehydrate just as well as water after exercise.

Castillo measured 16 healthy young males’ health and performance in several categories after 60 minutes of vigorous exercise. After one session, they drank water, and after another, they drank beer and water. The study showed no negative affects when comparing the two sessions.

“We toast to the professor after every run,” April said.

April and Fielder started grabbing a beer after running more frequently. Soon, they officially established themselves as the Fishtown Beer Runners, spreading the word through social media and encouraging others to join them.

“I figured if I was going to be a runner, I would make everyone else in Fishtown be a runner with me,” April said.

Their first run gathered four runners. The organization has expanded drastically since.

The runners meet outside April’s house at 2346 E. Susquehanna Ave. at 7 p.m. every Thursday.

At 6:50 p.m. on the night of a run, the street outside his home was nearly empty. A few runners, around five or six, performed warm-up stretches.

“We usually get about 75 to 100 runners,” April said, standing on the stairs in front of his front door, undeterred by the time.

His prediction quickly came true. Within the next few minutes the block was packed with runners coming from all directions and areas of the city, most sporting their Fishtown Beer Runners T-shirts.

“I live in Northern Liberties but I’m moving to Fishtown soon, and I’m happy I’ve found something like this here,” said Matthew Man, a physician and runner. Man has been running with the group for a year.

“I’ve lived in Fishtown for six years but I’ve only been running with Fishtown Beer Runners for two,” said runner Colleen Baille. “I’ve always loved the neighborhood, but when I first started running with these guys I felt I was really home.”

The organization has helped form long lasting relationships as well.

“I used to say these are my beer runner friends but now a lot of us hang out outside of runs,” said runner Jennifer Leung. “We’re really good friends.”

Leung and Baille met through running together and have become close enough to vacation together.

Even though Leung was injured and could not run, she still showed up to the bar to socialize.

Before they take off each week, April has new runners introduce themselves to a roar of claps from the veterans. He also allows members to make announcements from their other involvements around Fishtown and the city.

April plots a different route to a different bar each week. The bars are usually located around Fishtown, but can range all across the city, typically between three to five miles away.

The organization also helps out the community by holding fundraisers, dedicating a few runs a month to a specific cause, such as the one for St. Francis Inn to provide necessary toiletries the inn gives out to the homeless in the area. Runners made a stop on their weekly run to the inn to drop off any goods they could. 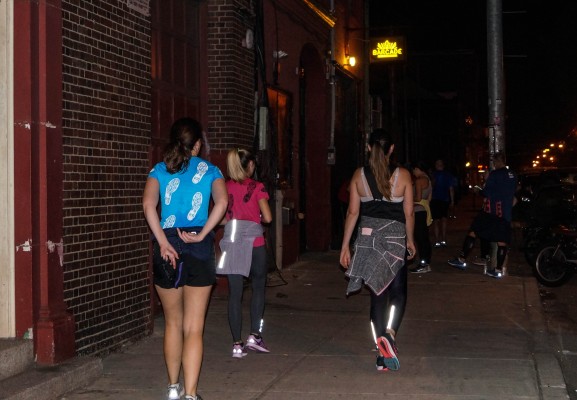 Fishtown Beer Runners do more than run, help the community and drink beer– they also star in their own movie.

“The documentary really taps into the transformative power of running,” April said.

The documentary covers April’s story from the beginning, highlighting how April turned a personal tragedy into a “movement that inspires many.”

The film will also screen at the Philadelphia Film Festival on Sunday at the Prince Theater.

The trailer can be viewed here.

For April, running has always been about something bigger.

-Text, images and video by Khaliha Hawkins and Logan Krum.

The Police Athletic League of Philadelphia was created in 1947 by a police sergeant who wanted to create a baseball team made up of neighborhood kids who wanted to play. Since then, PAL has worked […]

The nightlife of Fishtown has gone through a revival in recent years, with popular hubs such as the beer garden at Frankford Hall and specialty take outs like Bottle Bar East. However, established bars have […]

Areas like Kensington, Fishtown and Olde Kensington have become synonymous with a new rising scene that was not there before. With each artist that moves into the area, the culture begins to shift and the […]