On a cool, crisp, October night, Bill Wagner smiled as he watched his University of Pennsylvania football players practice on Franklin Field.

Penn’s Sprint football team might be one of the lesser-known groups to have played on Franklin Field but the Quakers have quietly become a force in the sport. Since 1934, Penn has played in the Eastern Lightweight Football League (ELFL), where players must weigh 172 pounds or less to have game time eligibility. In 1998, the league’s organizers changed its name to the Collegiate Sprint Football League.

Sprint Football League’s assistant commissioner, Steve McCloskey, has been involved with the league since Mansfield University’s 2008 inclusion. As a part-time employee, McCloskey has continued to be heavily involved with the revitalization of Mansfield’s football program for the past 26 years. The Pennsylvania native emphasized the league’s similarity to the National Collegiate Athletic Association (NCAA).

The league adheres to all NCAA rules and regulations. The biggest differences is that coaches don’t wear headsets, so everything happens from the sidelines.

But unlike traditional NCAA football, where according to a 2011 NCAA survey on college athletes, players averaged 43.3 hours of football-related weekly activities, Sprint football players practice only after classes have begun. Entering his 46th year as Penn’s Sprint football coach, Wagner is aware of his players’ freedoms.

“Well, the big thing is, the kind of youngster that’s been admitted to Penn, being very bright, the big thing is they’re able to handle more than one thing at the same time,” Wagner said. “The reason it’s good is because the kids are still listening on my team. I’ve got great assistant coaches who are all part-time.” 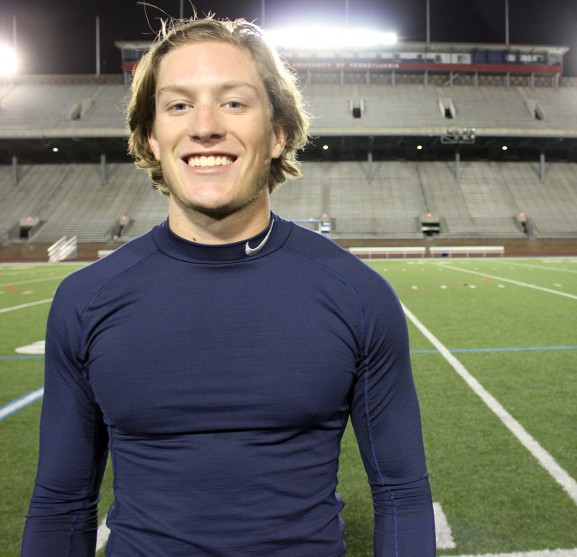 Senior mechanical engineering major, Stu Helgeson, (pictured above) has continued to lead his team at safety. The Quakers haven’t won their league championship since 2010, which continues to be decided – at the end of the regular seven-game season, by the team with the best record. Despite ending their season with a 75-12 rout over Princeton, in which the Penn team scored 11 touchdowns, Penn finished second in the league with 5 winds and 2 losses. Army took the league championship with an undefeated 7-0 season.

“As a defense this year, we’ve been phenomenal,” Helgeson said. “It’s the best I’ve seen it in the past three years. It really comes from the guys up front and our linebackers doing a great job cleaning up the run plays.”

What started as a simple idea to play baseball in the fall with a wooden bat has become a hit in Northeast Philadelphia. And it will return next fall, and maybe even sooner. Academy Sabres vice […]

When a person thinks about collegiate sports, the ones that come to mind include football, basketball and maybe even tennis or lacrosse. Beginning with the 2015-2016 academic year, Chestnut Hill College will add women’s bowling […]