She came home with bruises running up and down her arms. Her mother told her to just try to make the bullies her friends, and the school told her not to fight back.

That’s when Don Johnson, a chiropractor from Delaware County and the girl’s father, decided to intervene. 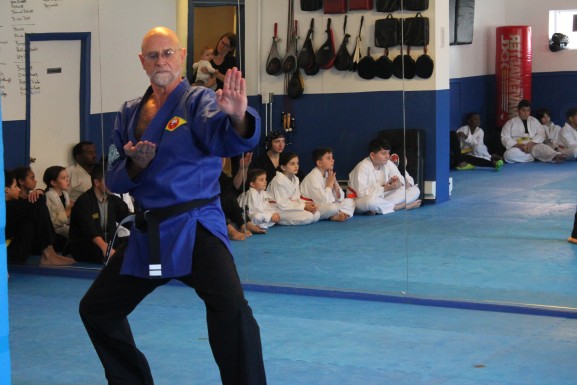 Johnson believes that self-defense should be a last resort, but is a very necessary one.

“I told her to say this exactly: I’ll get you to the ground and you won’t be able to stand up. Then I’ll go to the principal and be suspended for three days,” he said.

When the time came, his daughter did exactly what he told her. They never bothered her again.

This is exactly what Johnson teaches at his school, Philadelphia Martial Arts & Kickboxing. Students of all ages are welcome to learn how to defend themselves, but, more importantly, respect others.

Several signs that say ‘Karate Here’ guide visitors around the building to the back entrance at 262 E. Girard Ave., on the corner of Girard Avenue and Marlborough Street.

Inside, the floors are blue and your feet sink into the ground a little with each step (you can leave your socks on but shoes need to come off). A mirror covers an entire wall so that students can view their maneuvers.

For beginners, a typical lesson lasts an hour during which the students (mostly young kids) perform exercises and practice martial arts maneuvers.

Each lesson ends with a “bow to traditions.”

“I tell the kids that you don’t need to like everyone in this room,” Johnson said, “but you must be polite.”

Intermediate level courses focus more on hand-to-hand combat, and advanced courses offer lessons on how to disarm an opponent with a weapon. 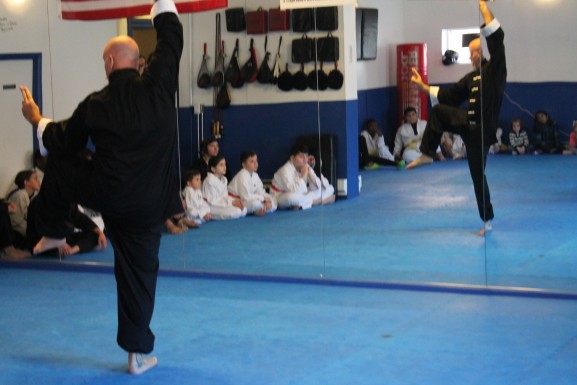 No matter the age level, any student will start the lesson with no belt. They must prove themselves worthy of a white belt, which is typically given as a starting point.

“I want them to understand that nothing in life that has value is given for free,” Johnson said. “You have to earn everything, including your first belt.”

The school hosted an open house for its third year anniversary in November, during which students were able to showcase what they’ve been practicing to family and friends.

Besides martial arts, however, the closeness between the instructors was also shown. Johnson and Jeremy Tanner, who opened the school with Johnson, gave many of the instructors gifts and certifications as thanks for their work.

Rita Lane, who has been helping instruct beginner classes for six months, was awarded a tiger patch to represent her physical commitment to the school – meaning she is constantly on site to help out.

Lane joined the school about a year and a half when her son Mark, who is high-functioning autistic, decided to join. Lane and her daughter quickly followed him, because she wanted to do something together as a family.

“Mark has come out of his shell a great deal,” she said. “It brings out the good in him.”

Johnson and Tanner acknowledged her dedication to the school. 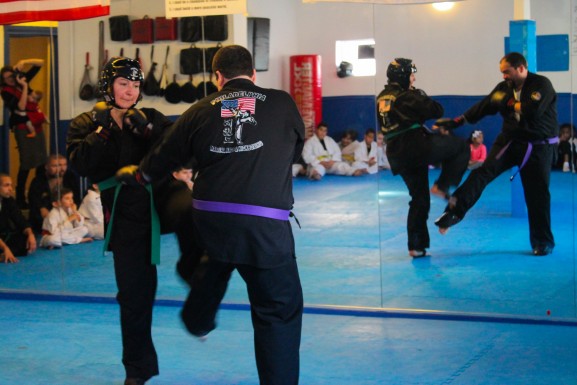 In addition, Bryon MacLeod was given his certification as the school’s first black belt.

MacLeod has trained in Chinese martial arts for nine years, and has taught at the school for two of them.

“When I see something click for a student, it brings a smile to my heart,” he said. “Say I’m teaching a student how to do a roundhouse kick. First, I’ll see it click in their brain, and then their body’s positions changes to deliver a sharp roundhouse kick.”

The school held its first class ever on November 12, 2012. It was opened by Johnson and Tanner, the latter of whom studied martial arts for 22 years.

The two started as best friends who taught a class above Johnson’s chiropractic office. They eventually decided they wanted to expand and ended up moving to Fishtown.

Tanner, who has instructed martial arts around the region and as far away as Canada, said the “toughness level” among students here was very high. 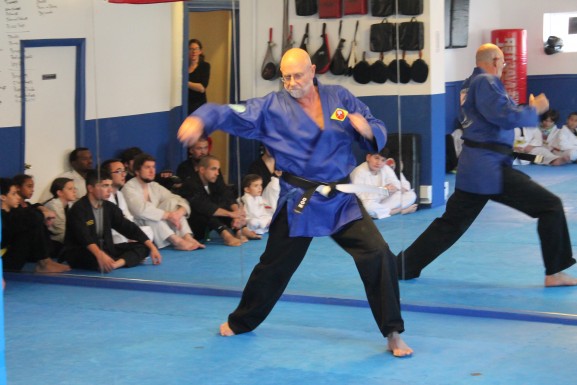 He also said nobody is ever done learning.

“Always remember that we’re all students,” Tanner said at the open house.

Johnson stressed that in order to build a community, one has to improve oneself.

“We start every class with certain tents,” he said. “Courtesy, integrity, perseverance, self-control, indomitable spirit. Your only competition, in anything, is just you.”

Fishtown: I-95 renovation to get worse before it gets better

For the past two years, residents of Fishtown have dealt with two of the most disruptive neighbors:  URS Corp. and the Pennsylvania Department of Transportation (PennDOT). Together the engineering firm and the Transportation Department began the [continue reading…]

According to the New York Times, Fishtown is the home of the Creative Renaissance in Philadelphia. The community once known for being a major source of Shad fish due to its convenient location near the [continue reading…]

While the gaming license process is often presented as an us-versus-them scenario pitting the big bad casinos against potential neighbors who want no part of said casinos, the reality is much more nuanced than that. [continue reading…]