Walking through Hunting Park today, it’s hard to believe that not so long ago it was a much less desirable place to be. Underfunded, the park was largely in disarray and disuse until the Fairmount Park Conservancy launched the Hunting Park Revitalization Project in 2009.

Prior to its renovation, the park was known to be unsafe and was subsequently avoided, which perpetuated the problem. Since 2009, crime in the park has steadily fallen. This is partly attributed to the renovation of the park, according to Al Cruz, a community relations officer for the 25th police district, which patrols the park.

“It looks nicer and people feel safer in the park and use it,” Cruz said. “It’s not perfect by any means. At night, you’ll still see the occasional vagrant wander in, but it’s been a huge step in the right direction.”

One of the first projects addressed by Fairmount Park Conservancy was increasing the lighting in the park.

“Lighting was number one,” said Meg Holscher, the senior director of development at Fairmount Park Conservancy. “The neighbors and community members said to us, ‘If you just do one thing … please put in more lights, please make the park safer.’”

The conservancy installed 64 new pedestrian lights around the roads of the park, illuminating much of the park that was previously shrouded in darkness during the night.

“You get more of an audience because they feel safer,” said Leroy Fisher, president of Hunting Park United, a community organization started during the first phase of the revitalization project. “Joggers, those that walk, those that bike – they’re more inclined to utilize the park because of all of the safety matters that were addressed.”

The increased lighting wasn’t the only thing that changed. The trees were cut back to increase park patrons’ line of vision.

Additionally, many new sports facilities were built in the park, drawing in more community sports programs and giving children a place to play. This is a significant departure from the park’s past, which was less child-friendly.

“As a guy, you were usually left alone if you kept your head down,” Adam Buchter said about walking through the park a few years ago. “But as a girl, you might have run into some trouble.”

Buchter is the longstanding athletic director of Little Flower Catholic High School for Girls, and has seen how the park’s development over the years has affected its safety. The school is located directly across the street from the park, but only recently has it been able to use the park’s facilities for activities.

“We only used the field directly across from the school [for field hockey and lacrosse] – we didn’t go in to the park,” said Buchter. “We shipped a lot of our teams out to other fields in the city.”

The renovations included a new football and soccer field as well as a new baseball diamond, new playgrounds and new tennis courts that not only facilitate the needs of the school but of the community as a whole. This is all in hopes of bringing more people into the park to use its facilities and making it less attractive for illegal activity. 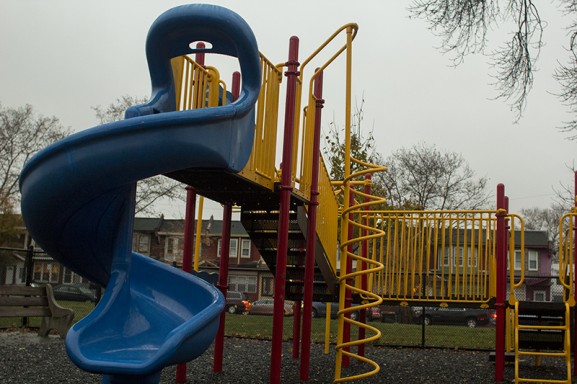 Little Flower now holds all of the practices for six of its seven outdoor sports at Hunting Park, with the exception of golf, which is held at Juniata Golf Course. With all of its field needs across the street, the school has been able to save a great deal of money by not shuttling the students to fields that are miles away from the school.

Where has this money gone? Back into the park.

“Right now, we give the park a donation each year for each sport that uses it to help them keep up the work that they’re doing,” said Buchter. “We replaced the buses with helping them out a little bit, so it’s all better in the end.”

https://vimeo.com/44871433] Along with an experienced bilingual staff, heath and wellness programs, and a connection to the Christian faith, the Esperanza Health Center has added a medical dispensary to its growing list of patient amenities. The [Read More]

Shireen Hammoudeh has been preaching about Islam since she became a teacher at the Muslim American Society Center in 2003 (MAS). Her mission has been to empower the youth and pass along the teaching of [Read More]

Since its construction in 1961, Joseph E. Mander Playground and Recreation Center has remained one of the few public green spaces in the Strawberry Mansion community. Located at 2140 N. 33rd St., it serves as [Read More]