Jay Pross never thought he would own a clothing store with more than 100 of his designs on display. He also didn’t think that his hand-painted T-shirts would go on to become a major hit in the music industry, drawing attention of iconic artists such as Soulja Boy, The Game and even Beyoncé.

It wasn’t until 13 years ago, when Pross’ friends commented on a shirt he had made for a funeral, that he realized his dexterity with paint. Now, the 30-year-old artist is the proud founder and owner of Art History 101, an urban fashion company based in Mayfair which opened its doors at 7045 Frankford Ave. in 2010.

“My friend passed away and I made one shirt with his name and I wore it out a day before his funeral,” Pross said. “I ended up making 20 shirts for me and my friends to wear to the funeral and they were a hit – it just led into more orders.” 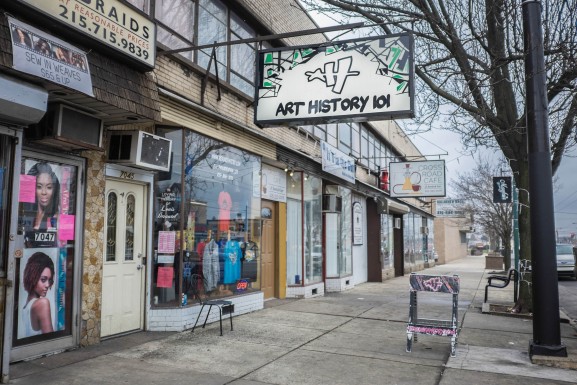 Six months later, Pross went on to study at the Art Institute of Philadelphia and within his first semester landed a job working at Miskeen Originals, a globally-recognized clothing brand known for hand-painted tees.

Shortly after, one of Pross’ shirts was featured in The Game’s “Dreams” video.

“Within a year of me making my own shirt that’s what happened, so I was like this is all meant to be,” Pross said.

Subsequently, the idea of Art History 101 was born out of Pross’ desire to branch out and open his own space to showcase all of his work. Before opening his current store, Pross worked out of his mother’s basement and operated business from an artist’s studio.

“It was an idea at first,” Pross said. “When I was working at [Miskeen], I did the hoodie Soulja Boy had on in “Crank Dat.’ The next time Soulja Boy called me up – so I said to him ‘I’m going to send you Art History instead.’ He wore Art History on the front cover of The Source and on the inside spread. That was pretty much the start of Art History.” 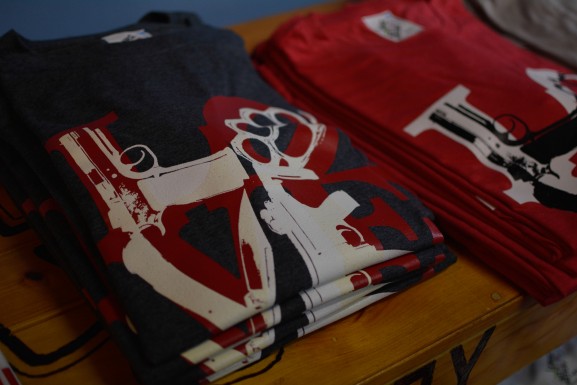 The Mayfair native attributes the triumph of Art History to the neighborhood. It motivated him to pursue his passion and open a clothing store.

“A lot of people in the neighborhood support me,” Pross said. “So literally it’s like I want to start up this clothing line – it was perfect – because I knew that the people I grew up with it, the people I was friends with, my family would support a business in this neighborhood.”

Now, the artist and store owner works with local businesses and institutions to give back to the community. Each semester, Pross hires interns from the Art Institute of Philadelphia, where college students can receive credit upon completion of their internship. 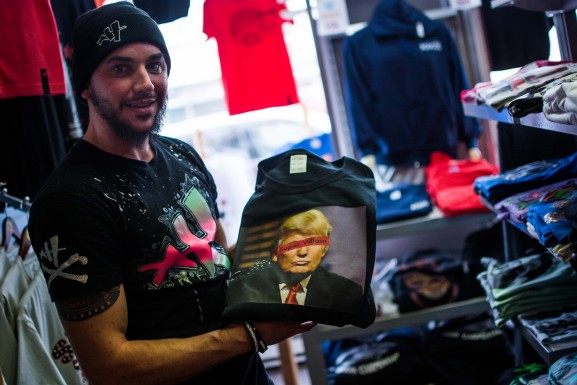 In addition to selling customized clothing, Art History also displays artwork created by local artists. Pross credits graffitists and tattoo artists in the area for providing him with inspiration for new designs.

Amanda Rodriguez (below), a 24-year-old Mayfair tattoo artist, first learned about the store from the pizzeria across the street. Since then, she visits Art History whenever she is in the search for a unique tee and is scouting out fresh ideas.

“He did a shirt for me – a RIP shirt – and everywhere I go, people ask me, ‘Who did your shirt?’” Rodriguez said. “The shirt is mind blowing. He’s amazing, his art’s amazing and the work is self-explanatory.” 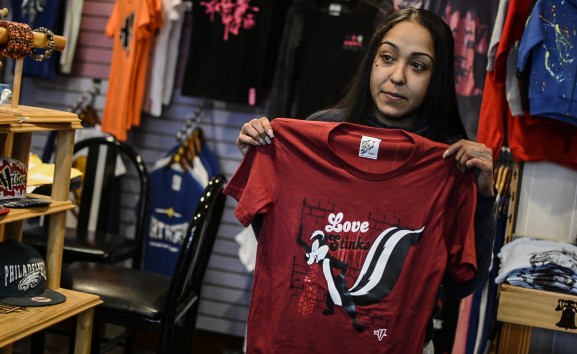 Roslyn Buchanan, 28, moved into the neighborhood only six months ago but makes an effort to visit the store every few weeks.

“I always pass by this place, you can tell it’s a really cool store and everything here is original,” Buchanan noted. “Nothing else like this exists around here. It’s very unique.”

Among Art History’s tight-knit staff is Andy Saroga, a Temple University alumnus who specialized in printmaking throughout his studies.

Saroga has been working alongside Pross for approximately two and a half years after hearing about the store from a friend.

“My buddy told me about this store,” Saroga said. “I came in for an interview and sure enough, I got the job and I’ve been here ever since. Working here, I get to do the silk screening, so it’s right up my alley.”

While Art History will be celebrating its sixth anniversary in March, Pross is reminded of several challenges he faced when he first opened the business. His mother, Barbara Pross, joined the team four years ago in 2012 to help facilitate organizational tasks such as taking orders and paying for utilities.

“When Jay first started, he had no business experience at all and just dived right into it,” his mother (below) explained. “There was a certain point in time when him and I were the only ones working here from open to close.” 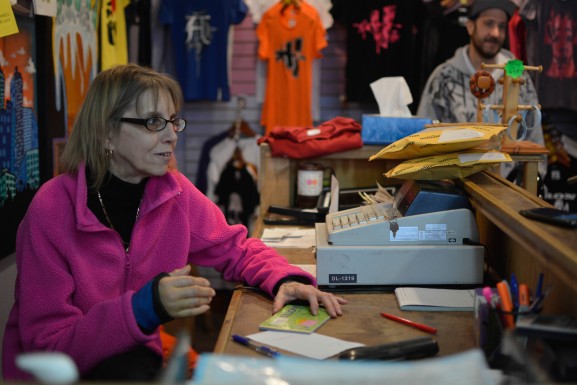 Now, the store is busier than ever. Pross is already thinking of new designs and limited edition shirts he hopes to release in the next few weeks.

“Every week we’re dropping a new design,” Pross said. “So if you’re following us on social media, you’ll notice that we keep it fresh all the time.”

— Text and images by Roseanne Tabachnik and Aaron Windhorst.

[vimeo 64066183] Jacqueline Unanue is a Chilean artist who creates art influenced by her ancestors, research and exploration that she has gathered throughout the years. Unanue was born in Chile and recently became a nationalized citizen [continue reading…]

Known for its vibrant art scene, there is literally something for every artsy person in Philadelphia. Some spots, of course, tend to be more unusual than others. 1. The Clay Studio (above), founded 74 years [continue reading…]