Whether it’s constructing highways, revitalizing communities or designing new methods for the treatment of water, engineers have a crucial role in the ongoing task that is the much-needed improvement of Philadelphia’s infrastructure.

While most of their professional needs are met by organizations such as the National Society of Professional Engineers, many engineers devote their time to local nonprofit groups in the hopes of applying their expertise to help local and international communities.

Engineers Without Borders began in Colorado in 2002, working solely on international affairs. Gradually, the organization began to work domestically. Today, chapters exist in most major cities.

The Philadelphia chapter’s members are comprised of local students and professional engineers looking to make a difference in the city. They concentrate their efforts and resources not only on national and global projects but also hyperlocal ones. Chapter president Walt Walker said that it is important to the organization that local communities get the proper assistance they need in order to function properly and have a stable infrastructure. 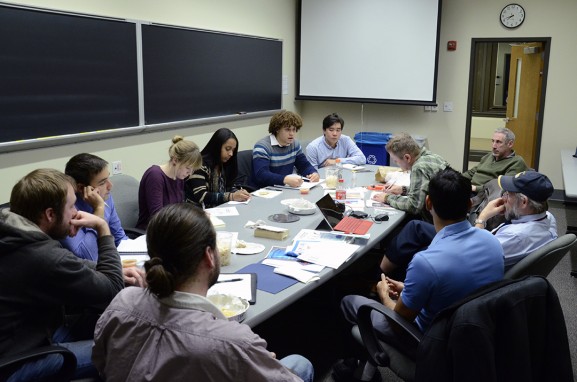 “Our mission is to create a world where all communities have the capacity to meet their basic needs,” Walker said.

Whether their focus has been on urban blight or gardening and tree planting, the organization works to not only make the city lively again, but also empower residents to want to become community leaders of their own and address these problems head-on.

Some of the notable collaborative work the Philadelphia chapter has been a part of includes partnerships with the Ray of Hope Project, Urban Tree Connection, Northeast Tree Tenders, Guild House West and Philabundance, among other community-based programs.

Through these team-ups, they have been able to accomplish enterprises other organizations struggle with because of funding or liability concerns. When providing their expertise on different engineering projects, the organization offers a way for communities to receive professional treatment without cost through applying to receive funding.

“We can go in and give them service, and we are doing it for free, which Is the beauty of that,” vice president James Furman said. “These communities and organizations apply for the funding and then we come in and help with the technical work.”

In the city’s most neglected sections, there is still much work to be done. The sad reality is that these neighborhoods are cast aside, with the city government channeling most of its cleanup work to areas such as Center City, a hub of big business, elegant dining, and shopping districts.

Around the city, Engineers Without Borders has left its mark in communities where it is visibly needed.

The Uber Street Garden stands as a beacon of possibilities on a block where infrastructure has been neglected by the city. This is where Engineers Without Borders came in. They brought not only professional ideas for the garden’s improvement but also volunteer workers.

The garden, overseen in its development and upkeep by block captain Agnes Domocase, who has subsequently incorporated the garden in order to fend off developers, has been a North Philadelphia paragon for more than a decade. Domocase’s home is directly across from the site, where she is able to keep a close eye.

“During the summer, all the kids are out here,” Domocase said. “The whole block comes out here. Engineers Without Borders came and put these stumps for the kids to sit, and the irrigation system for the raised beds.” 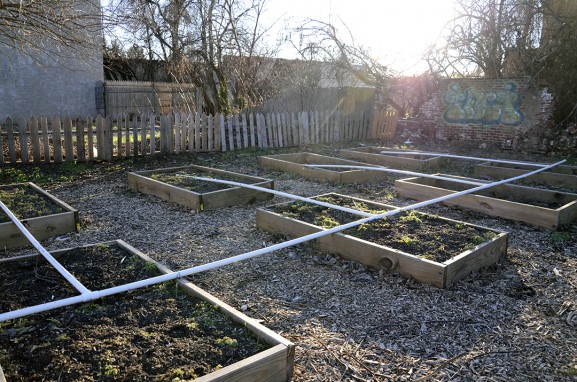 The garden is an ongoing project.

“They helped out with a lot but we need more help,” said Domocase. “It’s just not finished yet. But it’s getting there.”

Engineers Without Borders does what it can, where it can and, as Walker said, they aren’t finished giving back to community. In the near future they plan on continuing their urban beautification efforts,  while expanding their scope in the hopes of accessing funds and projects associated with programs such as the Philadelphia Water Department’s Green City, Clean Waters initiative.

“We would like to get involved in the storm water aspect, as well as green spaces bringing people together,” Walker said.

The future of Philadelphia’s infrastructure lies within the hands of those willing to make a difference and take a hands-on approach. For Engineers Without Borders, this is a welcomed challenge.

“Everything is about looking at a community and seeing what they need rather than us just dumping off a project and saying this is what we think they need,” Furman said. “We’re actually asking them how we can be of service to them.”

– Text, images and video by Daniel Pelligrine and Mario Corsaro.

A van of screaming children pulls up to the curb. The children are anxious to get out and stroll through the red wooden doors of the National Temple Baptist Church, head down the hall and [continue reading…]