Five years ago, Tim Patton and Christina Burris would have never thought they’d be running their own brewery. Now, they’re not only making Saint Benjamin beer at a re-purposed warehouse in Kensington, they are set to add a tap room and kitchen in May.

Using funds from the American Street Empowerment Zone business grant program, their tap room will include 12 taps, 50 seats and a full service kitchen, according to a brewery press release. The grant program, available to businesses that have invested money in the underdeveloped Kensington area, will help pay for furniture and kitchen equipment.

For Patton and Burris, the opening of the tap room and restaurant is all about growth – for the community as well as the brewery. Soon, they will be distributing beer in cans, not just kegs, and adding larger equipment to handle to the amount of beer brewed for the tap room.

While they currently distribute in Philadelphia, Delaware, Bucks, Chester and Montgomery counties, they are working to widen their distribution. All of this is part of their plan to expand the brewery’s brand and become a neighborhood staple. They hope that the growth of the brewery will inspire more businesses to move to the area.

Both Patton and Burris were on different career paths when they decided to explore the world of microbrewing. Patton had been dabbling in home brewing techniques when he realized he could have a future in the business.

“Some of my friends thought my home brew was really good and they suggested I look into brewing,” Patton said. “I wanted to work with my hands and interact more with people, so I got into nanobrewing.” 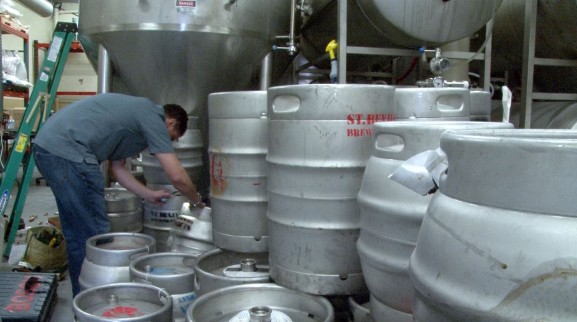 While Burris was contemplating opening up her own brewery, she met Patton and they discovered their shared passion. Looking to ease the stresses of opening a microbrewery – which produces considerably more beer than a nanobrewery – they decided to partner up.

After wading through the warehouse real estate market, they found their Kensington location in 2012 and finally opened their doors in May 2014.

“A lot of warehouses in the city have been poorly maintained, whether they are for sale or lease,” Patton said. “The owners don’t have an interest in making them viable industrial spaces.” 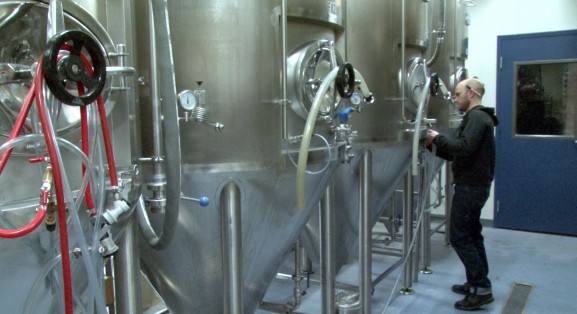 When asked about their choice of Kensington for a location, Burris points to history.

“This was a stable for another brewery that went under during Prohibition. They kept their horses on the second level, so it’s built to take a lot of weight,” Burris said. “It was sound and didn’t have much water damage, but more importantly, we wanted to stay tied to the community we came out of, and we could do that here.”

Kensington: The Fire and The Aftermath

https://vimeo.com/40147019] Imagine waking up at 3 a.m. to sirens, bright lights and smoke-filled air. Your block is almost completely engulfed in flames. For the next two days the place that you call home would be [continue reading…]

Fishtown: Running To Beer and Toasting to Science

When his life lost control, he found running. David April of Fishtown went out for a run one day in 2007 to distract himself from his recent divorce. He only ran for a block, but [continue reading…]

Kensington: Going Green One Rain Barrel at a Time

In a push to get local residents more involved in the environmental state of the community, Sustainable 19125 held a rain barrel workshop in East Kensington. It was organized to get the word out about [continue reading…]