Laughter and chatter filled the air as 30 people gathered in a tiny space in Hunting Park for an art exhibit entitled “I Am,” a self-reflective show on identity.

The space, called Orange Korner Arts, seeks to provide a safe Christian-based environment for the youth and their families to explore the arts and the turn out was positively overwhelming.

The center has been around for more than five years and had its biggest turnout for an art exhibit during the “I Am” show.

“We’ve had shows like this before,” said Lauren Fisher, the arts director at OKA. “We’ve just never had this many people here.”

Lauren Vargas, a former volunteer at OKA, came up with the idea for the show while working with six high school girls during a workshop last summer.

“[We discussed] who are you and what makes you who you are,” said Vargas, 33. “Part of that was family background and things from the past but also confronting stereotypes about racism or sexism. And who are we according to what God says we are.”

Vargas painted portraits of the ladies in the manner that best represented them and allowed them to write their own stories or poems around their images. 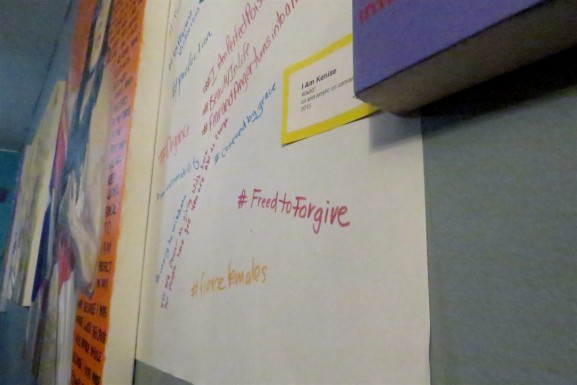 An interactive experience was offered to attendees, as they were encouraged to write hashtags – such as #beautiful and #strong – of what they believed represented each person next to their portrait.

The opportunity to learn from each other’s stories is part of what inspired the idea behind the workshop. Participants were able to express themselves and their past in a way that they have not been able to do before.

After feeling alone and depressed at the age of 13, Michelle Lundi, an 18-year-old participant in the workshop, found the experience to be empowering.

“It was very tough. I relived [my past] and felt a lot of the same emotions over again,” said Lundi. “I overcame something that was really difficult in my life so I feel blessed.”

Having the exhibit at Orange Korner Arts was important to Vargas, who sought to keep the show in an easily accessible place.

While participating in the exhibit was challenging for Kenise Terry, 19, she viewed the experience as a successful part of her growth.

“God is who brought me through,” said Terry. “And whatever brings you out of something is a blessing.”

The Lenfest Center is one of two locations for the SquashSmarts program in Philadelphia. Driving down the 3800 block of 10th Street, one might not expect to see the massive building where the lives of [continue reading…]

Arts & Entertainment: InLiquid Is a Gallery on a Mission

Matthew Hall has finally seemed to find his home. Currently working as a graphic designer for InLiquid Art and Design in Fishtown, Hall was born in Tallahassee, Florida, and moved to Salt Lake City before [continue reading…]