When the season for the Philadelphia Blackhawks begins, the team is never certain whether its budget revenue will get it through the year.

The Blackhawks, a Pee Wee youth football organization at 11th Street and Cecil B. Moore Avenue, collects the majority of its budget from sponsors across the city. There is about $30,000 collected from entry fees for players each year, but that is just a fraction of what is needed to sustain the organization’s needs.

“When the season progresses, you have to give more money to play,” Richardson said. “That’s where we struggle and our sponsors need to come in.”

The season begins at the end of July and concludes in December for every Pee Wee football team. The Blackhawks have 300 players who play in nine different age and weight classes. Two teams play in Division II competition and seven teams compete against Division I teams. 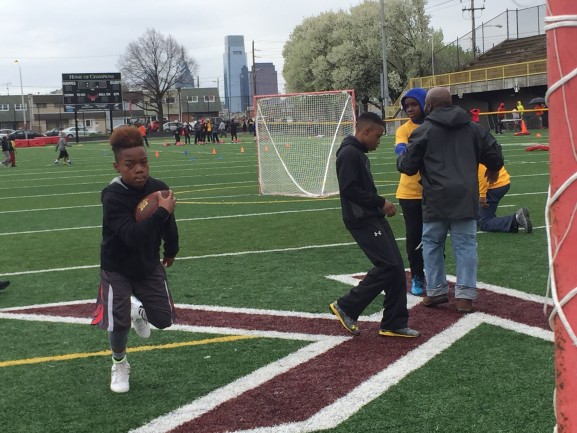 It costs $270 per year for the Blackhawks to field nine teams in the Pennsylvania Elite conference in the American Youth Football organization. The organization can cover those costs, but when the team reaches the regional and national stage, it becomes a problem when sponsors don’t chip in.

“It’s great for the kids, but it’s hard for the coaches,” director Don Richardson said. “Our fundraisers are not usually big, so it’s up to our sponsors.”

The current list of the Blackhawks sponsors include Beech Interplex, St. Joseph’s Preparatory High School, The Greenberg Group and The View at Montgomery.

This year, families spent $125 on an entry fee for a child to play on the Blackhawks. But as each season goes on, prices go up for traveling costs and league fees that near $500 or more.

“If we don’t have the money, we will personally pull the money out of our pockets,” Richardson said. “It makes them strive even harder.”

In 2010, the team claimed the Pop Warner Division I title after defeating the Sweetwater Hawks, 20-16, at the ESPN Wide World of Sports facility in Orlando, Florida.

Although the winning moment was surreal, the cost of getting there was out of reach until the city of Philadelphia, St. Joseph’s Prep, Mitchell and Ness, CBS, Comcast, Villa, Bowman Kavulich, and the Philadelphia Eagles chipped in to cover the $26,500 needed for the trip.

“As a kid, you don’t really know what it’s all about,” coach Reggie Smith said. “There hasn’t been a time where we couldn’t go, but we have to really step up and be great role models for these kids.”

Two summers ago, the biggest accomplishment for the Blackhawks came when it raised $2.5 million to reconstruct the existing football field into a multipurpose athletic facility for baseball, football and soccer.

Before the makeover, the field was a wasteland filled with broken glass, trash and mud that was dangerous to practice on.

“On a day where it was rainy there would be just a river down the field and we would cancel practice,” coach Derrick Williams said. “Now, we have a good drainage system from the water department. The kids are able to see what the hard work of people before them were able to achieve.”

“They promised a field, and I made them come through with it,” Richardson said.

The Blackhawks are now reaching out to sponsors to reconstruct its locker room and stands for the 2017 season. In addition, Richardson has reached out to St. Joseph’s Prep and the city of Philadelphia to raise money for new practice equipment and uniforms, which could cost up to $5,000 to fund 300 players who participate on multiple squads.

“We took the kids to Temple’s locker room, and they think it’s like a professional facility,” Richardson said. “We want them to have that here.”

After playing for the Frankford Chargers as a child, Don Richardson thought his son would follow in his footsteps. But when Eric Richardson wanted to play football in 1999, he had a different team in [continue reading…]