In 2006, the Philadelphia Animal Care and Control Association (PACCA) euthanized 90 percent of the animals that were brought to them.

In an effort to ratify the high frequency of euthanasia and provide a better alternative, Dana Spain founded the Philadelphia Animal Welfare Society (PAWS) as PACCA’s life-saving department.

In 2009, PAWS broke away from PACCA, which is now known as ACCT Philly, and they became a no-kill shelter.

“We became our own entity and have been that way ever since,” said Ame Wiltzius, the manager of the PAWS Adoption Center in Old City.

The institution’s mission is to influence people to adopt their pets rather than shop for them, and to provide countless cats and dogs with safety, love and care. Wiltzius stated that the organization encourages people to stop supporting the breeding industry.

Puppy and kitty mills are infamous for serially breeding animals for the sake of profit, often keeping animals in small, dirty and unsafe environments. By transitioning people from the mindset of buying pets to the mindset of adopting them, the industry will slowly die out due to lack of business. Then, the animals already in need of a home will be more likely to get one.

Wiltzius tends to take her work home with her, fostering pets while the animals wait for someone who is able to provide them with a permanent home. Wiltzius has no pets of her own but has been temporarily sheltering animals since she began working at PAWS.

“I get text messages with pictures from some of my favorite fosters after they’ve been adopted,” said Wiltzius. “It’s really rewarding.”

Lauren Campagnini, a PAWS adoption counselor, has fostered two cats during her time at PAWS. She actually ended up adopting one of them simply because she fell in love and didn’t want to give her up.

This is not uncommon. In many cases, animals being fostered end up subsequently being adopted either by the foster person or by a friend or family member when they grow attached to them. 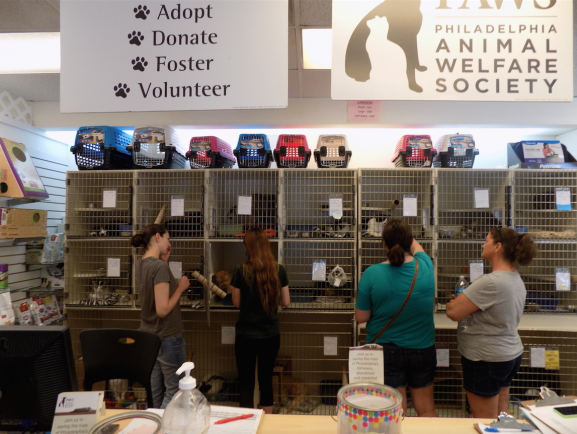 Grace Spring has only been a staff member at PAWS for nine months, but she is getting ready to start fostering too. Spring is planning to start taking care of Boo while searching for his potential forever-home.

Hopeful adopter Heather Chero stated that many of her friends had adopted pets from PAWS in the past and spoke highly of the organization. Chero has been the owner of six cats throughout her lifetime, and now, she is looking for a seventh. Chero is currently waiting for her adoption application to be processed, admitting that it is not a quick operation.

“It’s taken about five months to get to this point in the process,” said Chero. “I had to find a space that allows cats and another job with at least semi-normal hours so that I can actually be home to spend time with her and be able to buy all the necessities.”

Chero is continuing preparation to adopt a cat and hopes to be ready to do soon.

While PAWS is a no-kill facility, euthanasia is still unfortunately common elsewhere. That said, according to ACCT Philly, euthanasia rates are way down from what they used to be. In 2012, about 11,000 of the 32,000 animals that were taken in to animal control were later euthanized. In 2015, that number dropped to only 5,000 of the 25,000 animals taken in.

PAWS has cared for more than 10,000 cats and dogs since its launch. Averaging at about 15 adoptions per week, the organization continues to be cat’s and dog’s best friend.

-Text, images and video by Gabrielle Vinogradov and Allison Clark.

https://vimeo.com/69619550] Mount Airy always seemed homely and quaint to Iman Marcano-Sowell. That’s why when she decided it was time to find a home for Calypso – the Trinidadian restaurant she runs with her mother, Claudette [continue reading…]

The Philadelphia Youth Sports Collaborative – established in 2009 – is a collaborative of member organizations, which provide support for non-traditional youth sports-based programs in the city. The organizations offer physical development and life skills though [continue reading…]