The Special Committee on Criminal Justice Reform met last month in the City Council chambers. Co-chairs Curtis Jones Jr. of City Council, retired Deputy Police Commissioner Kevin Bethel and the head of the Defender Association of Philadelphia, Kier Bradford-Grey all presided over the hearing that focused on the psychology of criminals and potential criminals, and why young people choose a life of crime. Other members of the committee, such as Councilman Kenyatta Johnson, were also in attendance.

The committee was founded this year by Council to address laws and police procedures, and to improve the relationship between citizens of Philadelphia and law enforcement.

The committee brought in Dr. Sandra Bloom, psychology professor from Drexel University to testify on the current state of crime in Philadelphia, and what the city can do to help prevent youth from engaging in criminal activity.

Bloom attempted to convince committee members that criminal justice reform itself is not a new concept and still faces many problems because it is not being executed correctly.

“You have not identified the problem,” said Bloom. “You were looking at the ‘surface behavior’ but not looking for where it was coming from. We now know a whole lot more about that.”

More than 30 years ago, Bloom founded The Sanctuary Model, a series of psychiatric programs developed to help children with trauma-related mental disabilities. Bloom promotes what she believes to be the psychological skills necessary to live a non-violent life and live in a non-violent environment. The model is used across the United States by hospitals and treatment centers and is a testament to her knowledge of a child’s mind.

“The frontal lobes (of the brain) do not finish developing until our mid-twenties,” said Bloom. “That’s what allows us to have good judgement. That is why teenagers can be so problematic. They don’t have all of the equipment necessary yet to really exercise good judgement.” 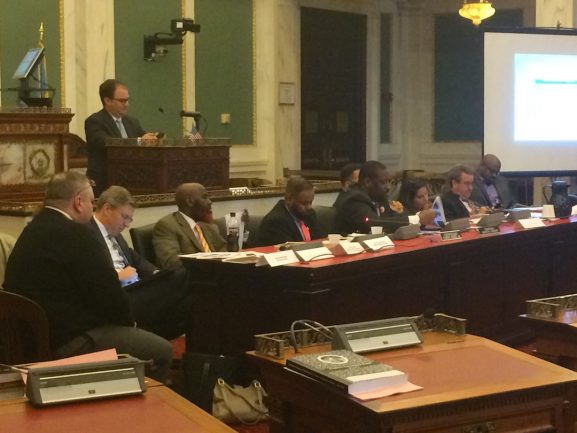 As Bloom discussed what creates criminals, she stressed one factor above all, poverty.

Chairman Jones expressed relief at the conclusion of Bloom’s testimony.

“I’m glad we finally have an idea of what the heck is going on in these areas,” Jones said and then asked how a municipality should deal with an issue so wide and diverse.

Bloom responded by saying the issue of trauma is an urgent health crisis and must be dealt with, even though there is no quick fix. She urges Philadelphia and other communities to make mental health treatments available to everyone, especially those who suffer from poverty.

The Special Committee on Criminal Justice Reform meets monthly and will meet next on June 27th.

In celebration of Pope Francis’ arrival in Philadelphia for the World Meeting of Families, approximately 3,000 Vietnamese Roman Catholics gathered at Cardinal Dougherty High School to celebrate. “That’s not a church,” objected one child as [continue reading…]

No one ever said life at an inner-city school would be easy, but Kensington High School for the Creative and Performing Arts has managed to overcome many obstacles to provide its students with an education [continue reading…]