The name of the game is quidditch.

Based off J.K. Rowling’s fantasy literature series Harry Potter, United States Qudditch was founded in 2010. Quidditch is a co-ed contact sport that is a mixture of dodgeball, flag football and rugby. There are seven athletes on the field for each team at all times, and players must run with a stick (intended to represent a broomstick) between their legs. Each player’s position on the field is designated by the color of the headband the player is wearing. 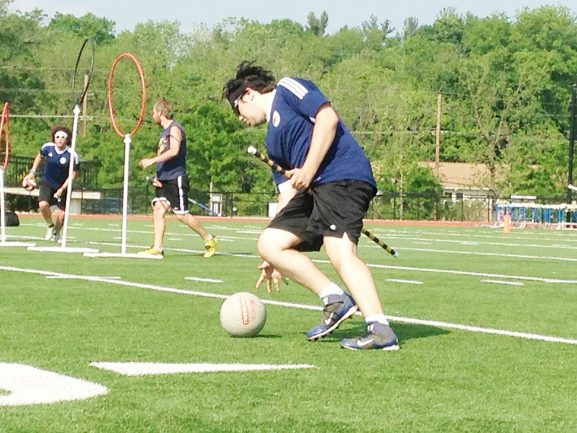 (A beater from the Drexel Quidditch Club, trying to capture the bludger to hit his opponents with, pictured above.)

Before the Honey Badgers bore that title, they were called the Delaware Valley Dragons. Ever since the change of name and location, the members have been pushing themselves to be more competitive.

“We were mostly a for fun team when I joined,” said Bridstrup. “A few players, myself included, pushed the team to try and become more competitive. I’ve played competitive sports my whole life and I don’t know how to be on a team unless I’m playing competitively.”

There are several of differences between J.K. Rowling’s quidditch and USQ. USQ players obviously don’t hover on broomsticks and soar through the air, baseball bats aren’t used by “beaters,” and the “golden snitch” is an non-bias person who tries to go as long as they can without getting caught. The USQ also oversees adjustments to the Quidditch rulebook.

“It’s still a contact sport but it’s a lot safer for those of us who play,” said Badger’s captain Stephen Jaworski. “The competitive aspect, however, is still there for most of us.” 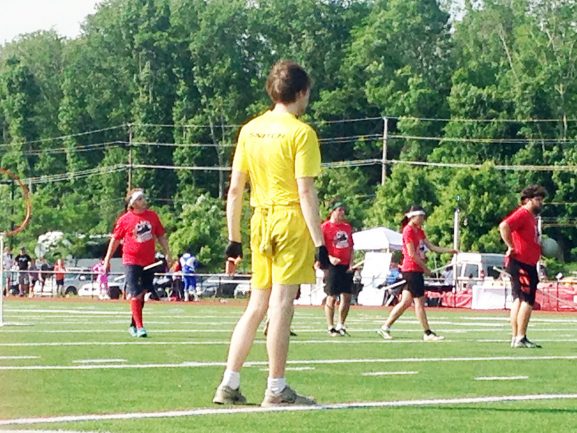 (Kevin Edelmann, the snitch, dressed in all yellow, carries a tennis ball in a sock around his waist (pictured above) that is worth 30 points.

Each team consists of the following positions:

Seeker: Yellow Headband. Each team has one seeker. The Seeker’s job is to try and catch the “snitch.” The seekers enter the game one minute after the snitch and attempt to catch it. The snitch is worth 30 points. Once the snitch is caught, the game is over.

Chasers: White Headband. Each team has three chasers. The Chaser’s job is to score goals with the quaffle (volley ball that is worth 10 points when made through one of the three hoops).

Beaters: Black Headband. The beater’s job is to hit opposing players with bludgers (dodgeballs). Once a player is hit by a bludger, that player must stop what they are doing, run back and touch their goalpost before returning into play.

Keeper: Green Headband. A keeper acts as the goalie for each team, trying to stop the quaffle from going into one of the three goal posts.

Snitch: Dressed in all yellow. A snitch is released into the game at the 18-minute mark. The snitch has a tail (tennis ball tucked into a sock) attached to the back of their pants. The snitch is worth 30 points. Once the snitch is caught, the game is officially over.

The USQ is responsible for organizing the regional and national championships, which is the main goal for a USQ team. In order to reach this level, each team must place at a certain rank depending on what region they’re in. 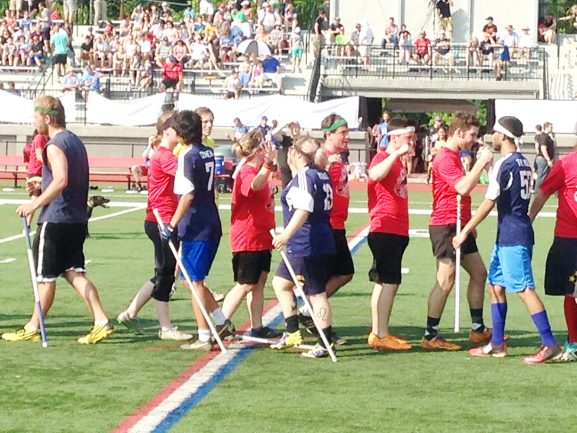 (The Philadelphia Honey Badgers and the Drexel Quidditch Club shake hands after a scrimmage at Germantown Academy field.)

Most sports today are defined by gender. However, quidditch is a competitive co-ed sport. Because of USQ’s nine and three-quarter rule, no team is allowed more than four players of the same gender on the pitch at once.

“It can be annoying because a lot of people say that they’re afraid to tackle me because I’m a girl,” said Drexel athlete Miranda Reinberg. “At the same time, it works to my advantage because I just tackle them when they don’t tackle me.”

Despite the idea of a sport coming entirely from imagination, USQ has created a league for people of both genders to get involved in to share their interest in Harry Potter and playing contact sports. The ability to compete at the highest level is what has led teams like the Honey Badgers into matches against teams from up and down the east coast and has connected people across the country.

-Text, images and video by Andrew Knight and Geno Cantell.

Any child or teenager, regardless of how shaky he or she might be on skates, can learn how to skate and play hockey for absolutely no charge. They don’t have to pay a single cent [continue reading…]

The football field at Hunting Park has been degrading for some time now, so why is there a bulldozer digging more holes in its surface? That is because there are plans to have the field [continue reading…]