All year round and no matter the weather, Kensington echoes with the unmistakable “plop” sound of a rubber ball bouncing off concrete. Handball is being played, and the 100 block of West Berks Street is where Towey Playground is found. Here stands one of the many handball courts in North Philadelphia, a hallmark of the community where players of all ages gather to compete.

“I come here every day after school now,” said 12-year-old Daniel Alamo who just started playing this year. “My big brother taught me how to play. I learned a lot so far.” 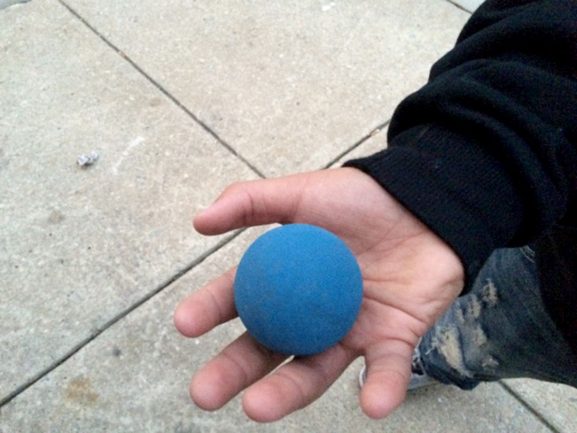 The pastime is played utilizing a small rubber ball, about the size of a tennis ball, which players smack against a wall using his or her hand or fist. According to the United States Handball Association (USHA) One-Wall Rulebook, the objective is to win each round (or rally) by serving or returning the ball so the opponent is unable to keep the ball in play. When this happens, the successful player gets a point. Officially, a game goes to 21 points, but on the street, competitors can declare what they wish to play to. 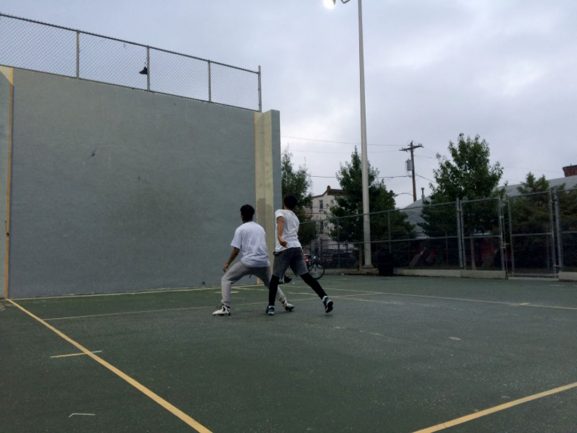 These rules are communicated to newcomers by seasoned players who frequent the court at Towey Playground and have been playing in the surrounding neighborhood since they were kids themselves.

“I’ve been playing handball since I was 10 years old,” said 42-year-old Jason Lopez, who holds multiple handball tournament trophies. “It’s a fun game, I’m still playing. Everyone should learn how to play.”

In Kensington, the game has been passed down through the generations. But according to USHA’s history on handball, the game may have been around for thousands of years before Philadelphia even existed. The earliest mentions of handball date back to 2000 B.C. in Egypt where artwork on tombs shows priests striking balls with their hands. About 1,500 years later, Alexander the Great was said to have spread handball to the Greek colonies in Italy. From there, the pastime traveled throughout Europe and eventually, centuries later, America.

Despite its history, many people throughout the city have no idea that handball exists. However, in Kensington it brings residents together, helping players forget daily hardships and statistics stacked against them.

Kensington: ‘Rise of the Tigers’ Featured in Metro

The Rise of the Tigers, a documentary about the Kensington football team available in part on Philadelphia Neighborhoods, was featured on the front page of  Metro at https://bit.ly/18bE3iN You can see part of the documentary [continue reading…]

https://vimeo.com/29337589] A lot of people tend to judge a book by its cover, and Kensington is no different.  Driving down Frankford Avenue through Kensington, you would be hard pressed not to acknowledge this neighborhood has [continue reading…]