Opened Oct. 1 at 1507 E. Passyunk Ave., South Fellini, owned by Philadelphia filmmakers and artists, Johnny Zito and Tony Trov, is the first physical location of the duo’s internet store of the same name. The store sells shirts, pins and patches with Philadelphia and pop culture influenced designs. According to Trov, the two decided to open a physical location because the timing was right for them.

“We’ve been doing the site for about six years and we recently purchased a printer to start printing our own shirts,” Trov said. “We found this great spot on Passyunk Avenue, so it was perfect for us.” 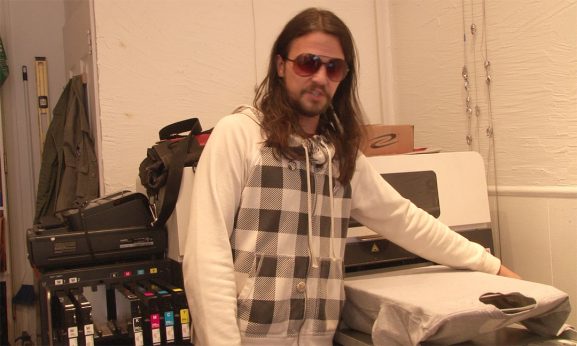 Zito and Trov stated it took about a month to clear the space, which was previously a hookah lounge, and redecorate and prepare the area for their store. Zito said they worked for 30 days nonstop without taking a day off.

The two design their own products and said they get their creative inspiration from food, brainstorming and listening to the ideas of others.

“You just have to keep your eye open and find beautiful things in the city that maybe other people aren’t finding,” Trov said. 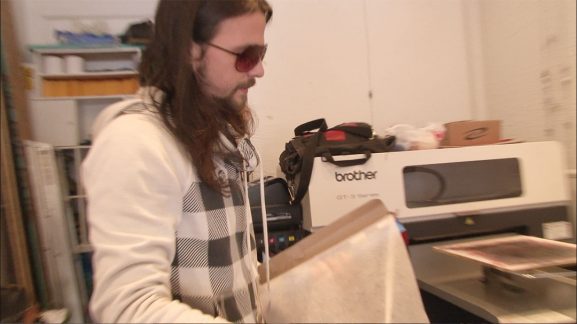 Joanna Cook, Trov’s fiancee, is also a part of the creative process. Cook said Instagram was the catalyst for a design with South Philadelphia doors, as she saw many people posting photos of them. She came up with the idea for the store’s Edgar Allen Poe design after being inspired by the now demolished Moyamensing Prison, where the writer was once imprisoned for public drunkenness.

“I just thought of the idea of a drunk Poe in Moyamensing Prison,” Cook said. “Then there I was just this girl carving Edgar Allen Poe’s face.”

Rob Gersten, a customer and city resident, loved the local themes of the designs and said they really resonated with him. He was also impressed with the design of the store.

“It’s pretty awesome since they just set up shop,” Gertsen said. “You walk into a place like this and you think it’s been there for awhile.”

According to Zito, the response to the business has been positive so far.

“People really like the shirts, but they also like the store which is very rewarding since we spent all that time on it,” Zito said.

Walking down East Passyunk Avenue, you might miss this Italian, family-owned and operated pizza shop. Iannelli’s Famous Brick Oven Bakery may be small but third generation owner, Vincent Iannelli, knows his way around the kitchen. […]

In the Philadelphia real estate business, it is pretty hard not to run into the name Allan Domb. He served as the president of the Greater Philadelphia Association of Realtors and he has been hailed […]