For Ken Weinstein (above), passion is more than just a cliche, it is the driving factor that has motivated him to become the successful real estate developer, entrepreneur, and benefactor he is today.

“Passion isn’t just about making money or going to a job everyday, it’s doing what you love to do,” said Weinstein.

The 53-year-old describes himself as a man who wears many hats due in large part to his widespread involvement in the Northwest portion of the city.

Weinstein has been involved in projects ranging from heading Mayor Michael Nutter’s economic development transition team in 2007-2008 to managing several of his own businesses. The self-made, serial entrepreneur currently serves as the president of Philly Office Retail LLC, a company that has renovated more than 200 run-down properties in the Philadelphia region since its inception in 1989.

“I liked taking junk, something like old buildings, and doing something better with them,” said Weinstein, about how he first got involved in the real estate development business. “I was really inspired by my landlady, who renovated six single-family houses with her own hands. I thought, ‘How cool is that? I want to get into that.’”

In 2000, Weinstein’s redevelopment career branched off in a whole new direction as he personally took a vacant commercial space on Germantown Avenue, just between Mount Airy and Chestnut Hill, and turned it into what is now the Trolley Car Diner, Deli and Ice Cream Shoppe (below). 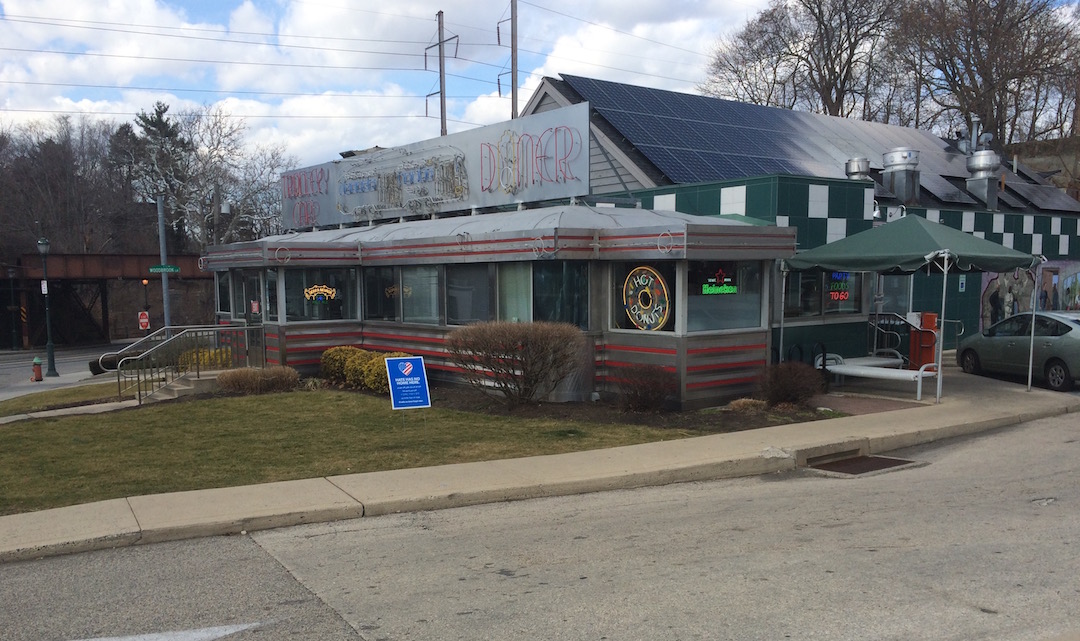 The diner, which now has a sister location in East Falls (Trolley Car Café), has become a hotspot in the Northwest, boasting a family-oriented, old-school atmosphere that manager Jerome Walls says is because of Weinstein.

“He keeps it like a family,” said Walls. “You would think someone of his stature wouldn’t be as homely as he is, but he comes in at times and will bus tables, talk to customers, and ring his own self out when he’s having dinner. It’s really like he’s just one of the guys.”

Weinstein’s commitment to his customers is just one example of his overarching goal to give back to the community and “do well by doing good.”

In collaboration with his diner, Weinstein has implemented several charitable programs over the years, including Helping Hands, which has given more that $150,000 back to Northwest communities from the restaurant’s profits, and the Trolley Car Teacher’s Fund, which aims to give teachers from local schools grant money to provide their students with supplies necessary to succeed in the classroom.

“We like to do things that benefit the local community,” said Adam Meadows, who serves as the general manager of the Trolley Car Diner and Café. “It’s a great feeling to give back to the community.”

“I was hearing from a lot of teachers and parents that funds were just not available in the public school system,” said Weinstein on why he ultimately started the Teacher’s Fund. “We thought ‘Let’s put together a pot of money where we can provide funding, up to $500 per teacher per year, so that they can move ahead with the projects they want to move ahead with.’”

“Ken is certainly someone who wants to do as much good as he can in the community,” said Amy Cohen, the administrator of the Trolley Car Teacher’s Fund and a close friend of Weinstein’s. “He’s really good at finding opportunities to do good.”

In recent years, Weinstein has also found a way to tie in giving back to the community with his real estate development through a program called Jumpstart Germantown.

The program, which began solely in Germantown in April 2014, has since expanded to Mount Airy, and works to train residential developers to recycle housing for resale throughout their own neighborhoods.

Though there is slight controversy surrounding some of Weinstein’s redevelopment projects associated with Jumpstart Germantown and Philly Office Retail, he believes that his projects are uplifting to communities and will ultimately bring people together.

“There are always naysayers and haters,” said Weinstein. “As long as you know you’re doing the right thing and improving the communities in which you’re working, then you just have to stay focused and look straight ahead.”

Similar to his role model, Bill Rouse, Weinstein hopes to be more than a developer; he hopes to be someone who is involved in giving back to the community and can be a go-to person in several walks of life.

“I’m really fortunate that I get to pick and choose what projects I get to work on,” said Weinstein. “It’s really exciting to be able to follow my passion everyday.”

Students at Henry H. Houston School are making their voices heard when it comes to bullying. But rather than speaking out against it, these students are singing out. Unveiled before an audience of students, teachers [continue reading…]

The new restrictions on voting implemented by Gov. Tom Corbett this spring has sparked some Germantown-area leaders recently to form a coalition for the purpose of opposing those restrictions that they contend are targeted at [continue reading…]