In the madcap world of the Philadelphia music scene, Tom McHugh earned a spot in his band under the most unusual circumstances.

“I actually auditioned via Craigslist,” the 22-year-old guitarist said. “The original guitarist, unbeknownst to me, ended up being my girlfriend’s ex-boyfriend, which was pretty awkward when we all found that out.”

McHugh has since become the leading force for The Retinas, a garage punk trio based in Kensington. The Cheltenham native says that he’s been working to move the band in a more professional direction, renting out their own studio space in a warehouse on East Tioga Street, instead of paying by the hour at someone else’s space. 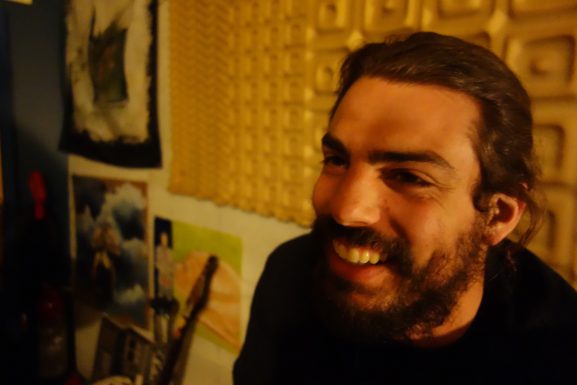 “I realized that it costs a lot of money to record in somebody else’s studio and you always feel pressured by the money you’re spending,” McHugh said. “You want to make it perfect but you’re also like, ‘I only have enough money for six hours.’ I felt like that was messing with the process.”

“Recording with Tom is great,” said drummer Anthony Fulginitti. “He creates an awesome, no-pressure environment and is always open to trying new ideas.”

McHugh grew up playing the violin, something he admitted he “wasn’t very good at,” and picked up the guitar in the fifth grade. He pointed to an experience he had with a friend when he was 16 that changed his perspective on music.

“It’s actually my friend Gabe’s fault,” McHugh recalled. “I remember walking with him and he was talking about dropping out of high school to play music full time. I was telling him, ‘You can’t be doing that, you’ve got to think about college and how you’re going to make money.’ And he said, ‘Plan B is doubting yourself. I don’t have a Plan B.’ From that moment, I started looking at music differently.”

“I can say that he got me on my feet recording in the city.” said Gabe Rosen, who plays with the band Tangiers. “Honestly, if he didn’t have everything together enough to record [Tangiers’] first EP, we probably wouldn’t be a band.”

McHugh has been influenced by multiple sources – including Jim Morrison of The Doors, Julian Casablancas of The Strokes and rapper Kanye West – but has mainly described the band’s music as “nostalgia rock.”

“I’m a sucker for romantic comedies,” he said. “I know we’re nowhere near sounding like that, but I like stuff that triggers some emotional connection to the past or some happy thought you’ve previously had.” 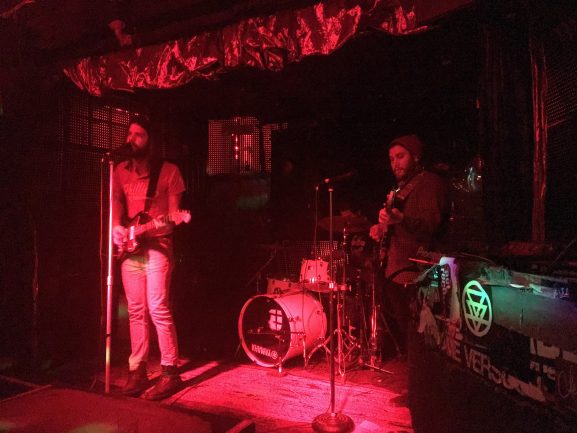 “I like the direction we’re going in,” bassist Andy Silverman said. “I think that we’re shooting for the sun right now. Tom can just bring something to the table so we can all listen to it and go from there.”

McHugh also acts as the band’s engineer and producer in addition to his guitar and vocal duties. He attended Temple University for five years, majoring in media studies, and interned at Kawari Sound Recording Studios in Wyncote afterward. The experiences at both places shaped how he approaches recording music, despite his sometimes wavering confidence.

“I’ve had moments where I convince myself that I’m not that good at [engineering] and that I should focus on music more,” McHugh admitted. “But my friends are all supportive and they’ve appreciated the work I’ve done, so I’m definitely itching to get back into it.”

McHugh has also worked with other bands on outside ventures. Sam Mercurio of the band Lally partnered with McHugh on his side project Randle Patrick McNuthing and had nothing but positive things to say.

“Recording with Tom is like recording with a safety net for all my bad ideas,” Mercurio said. “We try everything out and manage to sift through to the really potent ideas. Tom is patient and unassuming, where others are habit-oriented and reliant on prescribed methodology.” 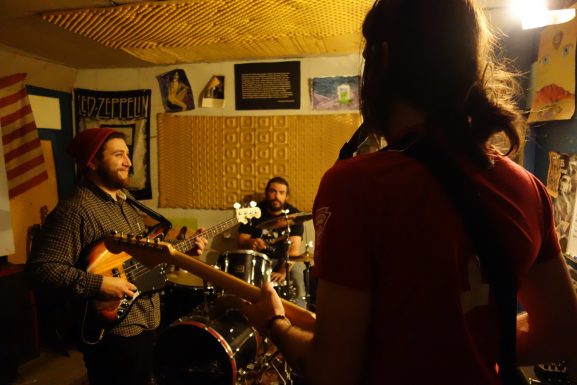 Going from amateur recording to a more professional style is quite a challenge, but McHugh has tackled the transition head-on.

“I’m still learning a lot with guitars,” McHugh said. “I spent so much time learning how to record drums that I neglected learning how to do the same with guitars. Recently I’ve been doing DI [direct input] while looking up YouTube videos and experimenting with EQ [equalizers].”

McHugh and the rest of The Retinas are hopeful that they can break out sooner than later, setting goals to play at Electric Factory and Union Transfer in the near future. Along with their tours, they plan on releasing more material as the year goes on.

“We have a bunch of songs getting mastered right now we’d like to release,” McHugh said. “We’re trying to decide whether to put them out all at once or staggering to stay relevant, and we keep going back and forth on that. We’re all about making this our main gig and focusing solely on the band. Those are the people you love playing with the most.”

– Text, images and video by Cameron Alexander and Kyle Morgan

The smell of fresh coffee emits from the second floor of Circle of Hope, located on Frankford Avenue and Norris Street, as the Kensington Community Food Co-op (KCFC) sets up for their Tuesday market place. [continue reading…]

Massage and music merged on Market Street in West Philadelphia during the R&B Fest on a mid-September Saturday sponsored by the Partnership Community Development Corporation. The R&B Fest street festival was held to raise awareness [continue reading…]