The owner of The Gun Range greets all of his customers at the door, a welcome underscored with the faintest hint of an accent that originates somewhere between Russia and Israel.

After a tumultuous childhood spent partly in the former Soviet Union, Yuri Zalzman came to the United States as a teenager. He later obtained an undergraduate degree in history at Temple University, and then went on to law school in New Hampshire. His demeanor is quiet and warm – until he’s in his range with a loaded rifle.

Zalzman can still recall shooting his first gun at the age of 6 in Israel with his father, a young start to what would shape his career well into his adult life.

“For all intents and purposes, it was a dead business, but it wasn’t closed,” said Zalzman, 48. “I took it over, renovated it and infused a different philosophy and spirit into the place.”

Now, The Gun Range brings in more than 10,000 customers every year, thousands of whom are members, according to Zalzman. The idea of the range is simple: promote a friendly atmosphere with a greeting from him and his wife (whom he met on a blind date, and what she recalls as love at first sight), offer hands-on education and – most importantly – ensure the safety of everyone who decides to pick up a firearm.

“The safety aspect of firearms is not unique to me,” Zalzman said. “It’s a standard in the firearm industry so long as you’re dealing with professionals. Safety is first and foremost.”

That idea is clear among Zalzman’s customers and co-workers. Brian Gillespie, 59, was visiting the range for the fourth time on Feb. 19. He said Zalzman and his staff create a friendly atmosphere, but always adhere to his philosophy about safety. 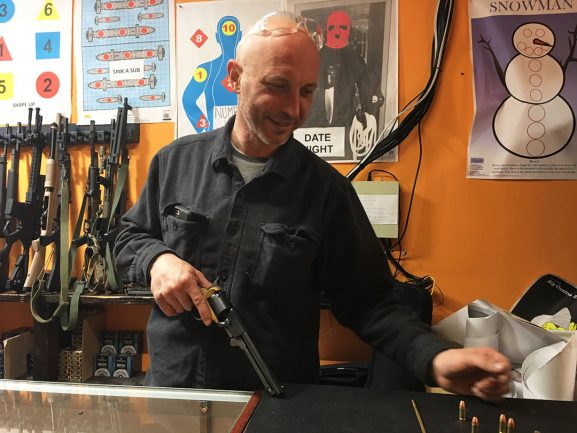 “Safety’s always No. 1,” said Gillespie, a Francisville native. “If you don’t adhere to safety, it becomes a dangerous sport.”

That philosophy has stuck with Curtis Gage, a former Marine who started working under Zalzman at the beginning of the year.

“Safety is king, queen, lord or savior, whatever you want to call it,” said Gage, 25. “If you’re safe and you like to have fun, Yuri is a great boss to work for, and he has a lot of knowledge.”

Derek Phillibert, a 22-year-old engineering student at Drexel University, has been to the range three times and uses shooting as a stress reliever from exams. Phillibert, who hails from Boston, said the range’s easy-learning environment stands out.

“They seem excited to help new people, which I think is rare in anything, honestly,” Phillibert said. “Because I’ve had experiences where people don’t train.”

While Zalzman is a proponent of the Second Amendment, he said gun control should be less of a hot-button issue.

“What’s really missing is good, balanced, informed conversation,” he said. “What’s prevalent, unfortunately, is the fuel that fans the fire of discord and clear demarcation.” 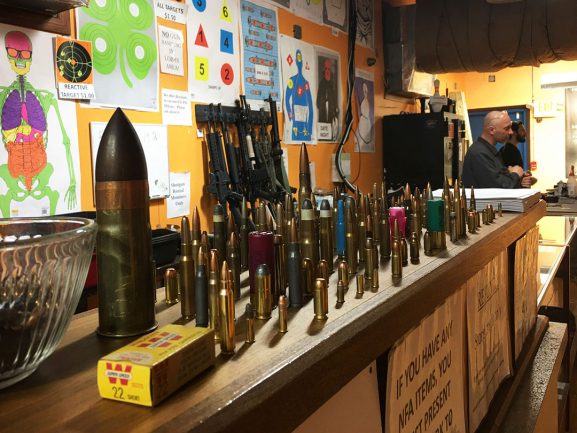 Zalzman added that educating people about how to safely operate guns and conversing with such a diverse clientele – in terms of race, culture, age, gender and sexual orientation – is rewarding. No matter the experience level, he wants shooters to feel like The Gun Range is a social experience where they can unwind and relax in an inclusive space.

The appreciation for diversity that he brings to his business, he said, stems from his parents, whom he describes as dragging him through the former Soviet Union, Israel and Austria before reaching the U.S. at the age of 13.

Kathy Zagadinow, 48, recently visited the range and shot a handgun for the first time. She praised Zalzman and his staff for a comprehensive safety lesson before entering the range.

“I felt fairly confident going in [to the range],” said Zagadinow, from Northeast Philadelphia. “Of course when I went in, I was shaking a little. … It was a little scary, but it was fun.” 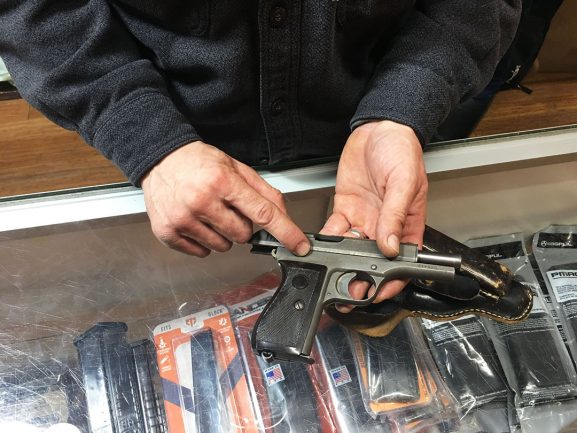 Zalzman said keeping the range entertaining for newcomers and his longtime members is another major aspect of his business. It’s the reason why, every month, members are invited to shoot objects other than the traditional paper targets.

The idea started with empty water bottles, partially filled and tethered down on a wire at one end of the range. Then, phones followed. And old computers. Even sex toys.

Zalzman would like to expand the range to sell firearms but does not yet have city approval. Colosimo’s gun shop, in its last years, had become the target of community protests and was shut down by federal authorities in 2009 for allowing straw purchases, according to The Inquirer.

Zalzman is also looking to introduce virtual reality to firearm- and self-defense training – classes that are also offered at the range on a weekly basis. 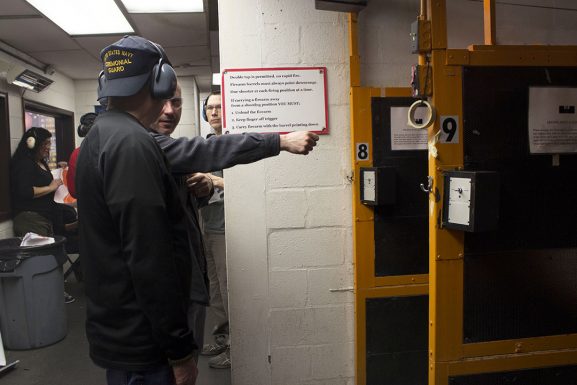 Zalzman hopes the range’s inclusivity, safety practices and friendly environment can help break the stigma about firearms, especially in urban areas. He equated the range to another popular social venue.

“I tell people, ‘This is almost like running a bar,’” Zalzman said. “Not like a dive, where you come in and drown your sorrows, but a ‘Cheers’ bar, where it’s a social place where people come to talk, hang out and unwind and forget about the rest of the world.”

– Text, images and video by Emily Rolen and Steve Bohnel

Arts and Entertainment: Variety at 9th and Spring Garden

9th and Spring Garden sits on the edge of an area with various names: Callowhill, West Poplar, Chinatown North, or even the Loft District. The Philadelphia arts community; however, affectionately refers to the post-industrial section [continue reading…]