Those close to Philadelphia artist Caitlin McCormack describe her as humble, kind-hearted and talented. Though she views her self as “not good enough” and a “burden,” her peers strongly disagree. 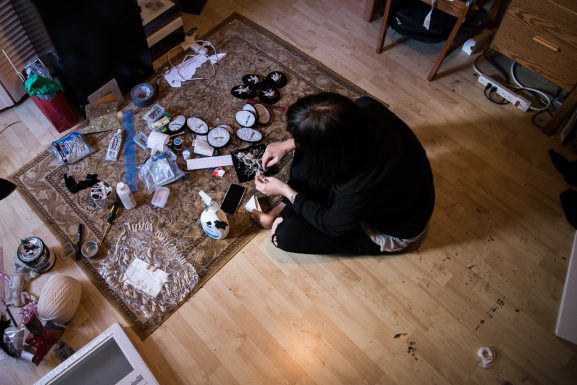 “She’s just such an incredible artist,” said Jason Chen, co-owner of Paradigm Gallery + Studio, who met McCormack after both graduated from college. “I want to say she just radiates inspiration.”

McCormack comes from humble beginnings in rural New Jersey, where she grew up as the daughter of two broke artists. She spent much of her childhood looking for ways to entertain herself in the woods and began dabbling in art and creation. Her family didn’t have enough money for toys, so she took the initiative to make her own. She sculpted dolls out of clay and sewed old socks together to create clothes. 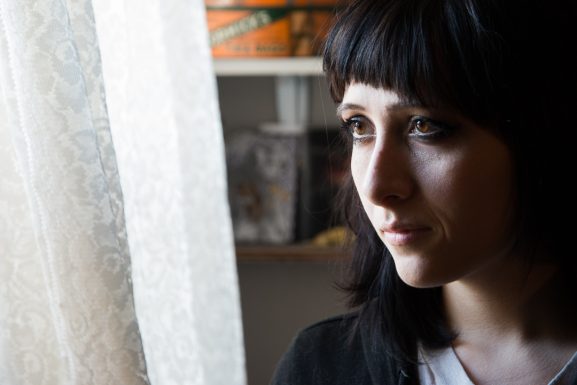 Today, her passion for creation comes out in the form of crocheting cotton string into sculpted animal skeletons. Though seemingly eerie, the ultimately heart-warming practice has helped McCormack set herself apart from other artists in Philadelphia. It all started as a coping mechanism.

“When [my grandmother] finally passed away, I started crocheting as a way to deal with the grief, using thread that she left to me,” said McCormack. “I started creating these skeletons that I would stiffen with glue because it just felt like something I should experiment with. The way I crochet now came out of the period of grief.”

Creating masterpieces hasn’t always been easy for McCormack. She says it took her a long time to figure out the correct combination of glues necessary for her works to properly stiffen. Even after she has the perfect glue-to-glue ratio, McCormack still must sketch the skeletons and then bring the sketch to life by crocheting. She dredges the finished crochet skeleton in glue and lays them out to dry. Creating one skeleton can take several months, according to McCormack. 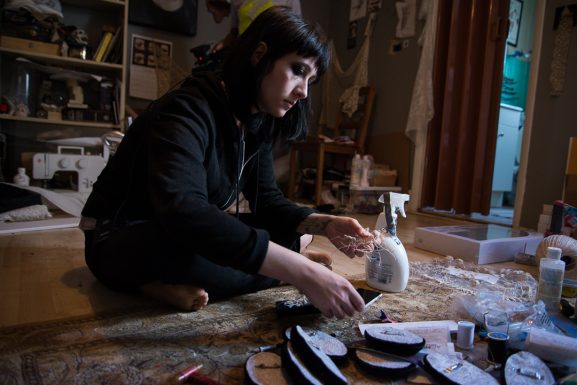 “I’ve always been fascinated with remains, and since this whole thing kind of came out of dealing with grief,” said McCormack. “It’s about memory and the thing that a recollection is distilled down to this almost totally gone, diminished relic of something that was once alive.”

Today, McCormack’s talents have earned her an exhibit at the Mütter Museum alongside artist Sabrina Smalls, called Tracing the Remains. The duo met through a mutual friend two years ago, and it was then that Smalls asked McCormack to join her on her upcoming show. The show has garnered positive attention since its opening in January. Smalls says that working with McCormack has been nothing but a pleasure.

“She’s really talented,” said Smalls. “We’re of different generations, so we have different experiences of the art world and of social media, but I think it’s really great working with her. I’ve learned a lot and have been in touch with a lot of new people and a new audience because of her.”

Though she often doubts herself and her work, McCormack’s peers have nothing but positive things to say about her. And, Smalls says she finds inspiration from the partnership. 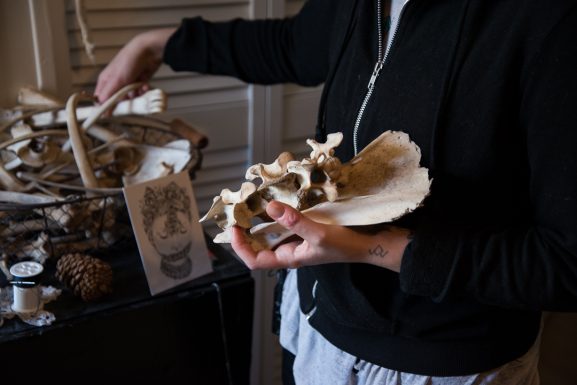 “I feel that when a younger artist decides to show with me, it seems to say that I am relevant, still,” said Smalls.

McCormack graduated from the University of the Arts in 2010 with a degree in illustration. It was there that she met Sara McCorriston, co-founder and curator at Paradigm Gallery + Studio.

“She’s such a loving, and kind and giving person,” said McCorriston. “She puts so much of herself into her artwork. Its an absolute pleasure to work with her as an artist and to have her as a friend.”

Although Chen did not know McCormack personally at the time, he distinctly remembers her work from an exhibition at the University of the Arts that featured the both of them.

“The piece I remember very correctly [was] the skeleton of a fish,” said Chen. “And, as I go closer, I realize it’s crocheted.” 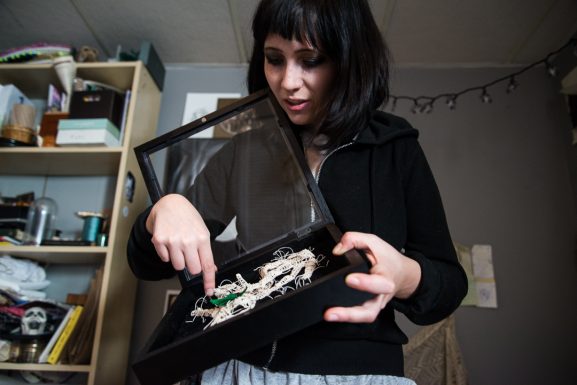 After their exhibit together at the University of the Arts, Chen recalls the moment when he recognized McCormack and her work when she submitted a crocheted cat skeleton for exhibition at Paradigm Gallery + Studio, years later.

Chen described the moment as being, “incredible.” Their relationship blossomed as they worked together on McCormack’s first show at Paradigm. Since then, both Chen and McCorriston have represented McCormack.

“She is a lovely person—the [humblest] person I’ve ever met,” said Chen. “Every time I hang out with her it’s just a lovely time.”

According to many of those who work with McCormack, she is a wildly talented artist; however, McCormack says she often struggles with accepting success.

“I am a pretty negative person,” said McCormack. “I fixate on what I did wrong and how many mistakes I made.” 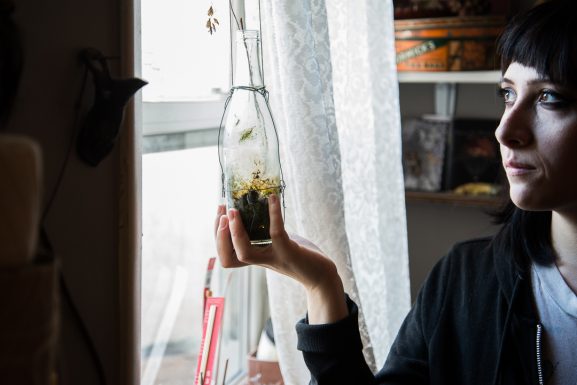 Even so, the rising artist offers some hope for attaining personal success.

“I will feel accomplished if I can fill a gallery with work that I’m not totally embarrassed about,” said McCormack. “It’s hard to feel satisfied when you just want to move to the next thing.”

– Text, images and video by Brian Tom and Sequoia Hall.

For five minutes every New Year’s Day in Philadelphia, the Duffy String Band struts its stuff down Broad Street during the Mummers Parade. These five minutes are the culmination of a year’s worth of planning, [continue reading…]

Jerome Shabazz opened the Environmental & Arts Education Center in 2006. This was when he witnessed the positive effect hands-on experiences had on students of the Overbrook community. Interacting first with the school district, Shabazz [continue reading…]