Since 1984, Philabundance has been operating out of South Philadelphia with one goal in mind: ending hunger in the region. Today, the nonprofit organization serves approximately 90,000 people per week. Glenn Bergman, a former health care professional, has served as executive director of Philabundance for almost two years. Bergman came to the nonprofit after spending 11 years expanding Weavers Way Co-op, a cooperative supermarket based in Philadelphia, into a multi-million dollar business. According to Bergman, the key to success in the nonprofit sector is a combination of corporate structure and cooperative values.

Tell us about your career path, how did you find yourself at this point?

I have a degree from Temple in public health, and I worked for two years at a place called the Philadelphia Health Management Corporation in emergency health care planning. From there I worked in clinical research at Jefferson with a psychiatrist working on psychopharmacology on depression and anxiety medications. Then, since I loved to cook, I went and worked for a restaurant after that for a couple of years. That ended up being eight years and I was the executive chef. Then I started working for a place called Weavers Way Co-op, which was a cooperative store, and I liked the idea of being able to stay home in my neighborhood as opposed to traveling all the time. I worked there for 11 years and built it into a $24 million business and a non-profit. Then they needed someone to run this place and a board member or two came to me and asked if I would take the job here about two years ago. 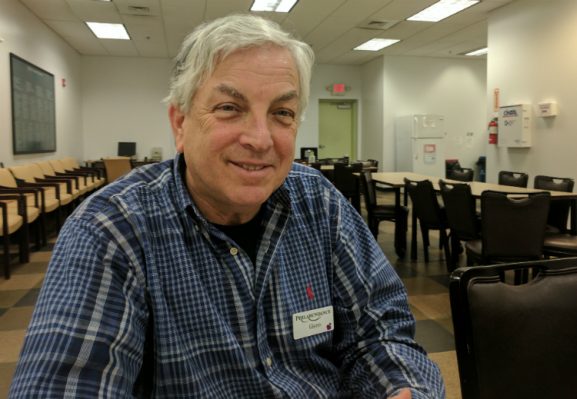 How do you work towards achieving your goal of ending hunger in the region?

We do a number of different things. We’ve always done food relief, or food rescue. I’ve known the company since 1984 when, as a chef, I used to donate leftover food when it was very small. Today we rescue about 10 million pounds of food from the backs of grocery stores that normally would’ve just been thrown out. So then we bring that here and we work with agencies and help distribute food. We also get donated food from food drives. We also get some government money to help our senior program. We also do a job training program in North Philadelphia. That is program for people both inside and outside of prison. We help them with life and job skills with cooking.

When you came here, was it operating any differently, or did you feel you were stepping into a role?

Basically the same, but it’s operating a little bit differently. There’s a different feel inside. We like to collaborate more with other non-profits than we did before. We work with more food banks and other agencies, which we were not doing before. We work with agencies to help distribute food, which we were not doing before. That’s a long term process. We’ve been working with more volunteers to distribute food than we were doing before, and we’re working toward increasing our job-training program to make it a much bigger part of Philabundance. 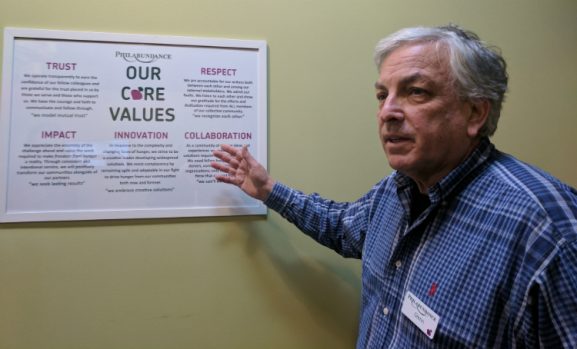 How much of what you do relies on the volunteers who come?

We get about 16,000 volunteers a year, about $1.2 million worth of labor. So we have a budget of about $8 million in labor and about $1.2 million on top of that is volunteer, people who come in and help sort and run our Fresh for All, the free farmer’s market we do. Or they volunteer down at our store in Chester, which is the only grocery store in the whole city. And they help with the shelving and things like that.

Can you talk more about the Fresh for All markets?

So you just pick up whatever you want there?

Well we have [a limit on] how many you can take. But it’s worth seeing. There’s like nine of them every week and the addresses are on our website. We don’t ask people to show us any paperwork about how much income they have or how much they have in the bank. If you’re willing to come in, wait in line, get the food and go home, then we’re counting on you self-declaring that you are in need so there isn’t another hurdle to get over to get food for yourself as a poor person. 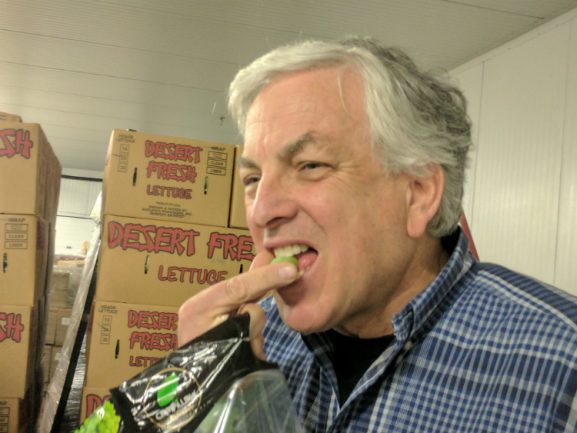 What do you enjoy about being in Philadelphia?

Well I like the mix of people. I don’t like the poverty. Twenty-four to twenty-five percent of the population is in poverty. Twelve-and-a-half to thirteen percent are in deep poverty. That part is terrible. The poverty level is awful. The amount of the jobs that have left here and gone overseas is just terrible. But what I like about it is the mix of different people, the ability to eat a lot of different types of food, the fact that it’s still affordable is some areas. I like the fact that it’s a lot of young people staying and building up the city. There’s a lot of great urban farms going on and there’s a lot of great small businesses.

–Text and images by JD Fogarty and Jon Ginsburg.

On Monday nights at The Irish Times, a small, intimate pub tucked away at 2nd and Bainbridge, Mike Dougherty can be found hosting his weekly open mic nights. Dougherty, a Mayfair resident, started the series [continue reading…]

Queen Village: Five Thrift Shops Where You Should Buy, Sell and Donate

Thrift shops, like Retrospect (above), are popping up all around Philadelphia, and the center of the used and vintage craze is Queen Village. With Fabric Row on 4th Street, many thrift and vintage shops have [continue reading…]