On a recent Friday night, big, lantern-shaped yellow lights hung from the ceiling of Studio 34 and cast a warm shadow on intricate paper birds that dangled a few inches below. A variety of comfy couches, love seats and homey wooden chairs were scattered throughout the space, all facing a small stage area where a single mic stood.

Colorful letters hung on a banner around the cozy space that spelled out the poem “Mornings at the Blackwater Pond” by Mary Oliver. The banner read:

“What I want to say is that the present is what your life is and you are capable of choosing what that will be darling citizen. So come to the pond or the river of your imagination or the harbor of your longing and put your lips to the world and live your life.”

This poem perfectly illustrates the mission of The Fuze.

The Fuze is a slam poetry organization that was created in 2007 by Sherod Smallman. Smallman first found his affinity for poetry as a young boy, when he rewrote the ends of “Roses are red, violets are blue” poems. He later attended national spoken word competitions.

Inspired by poets around the world, Smallman went on to earn his title as Slam Master, a certificate of proof that he was an experienced and well trained slammer. After winning numerous titles at competitions around the country, Smallman returned to Philly, only to find that his passion for slamming did not hold weight in the Philadelphia arts community.

Before The Fuze, Philadelphia did not have a cohesive poetry community, he said. Smallman was determined to connect people through spoken word. He wanted to create a safe and open atompshere that would allow poets to share work and develop their craft. He asked the owner of InFusion: A Coffee and Tea Gallery if he could host a slam there, and the rest is history. The Fuze performed at InFusion for five years and moved to their current space at Studio 34 in 2012.

The Fuze invites all walks of life into to their homey living room environment to watch a slam, support their friends or participate in an open mic, whether it is their first poem or their first published poetry book. Smallman stressed the loving, positive and encouraging environment that The Fuze cultivates, which has in turn established a new community of artists.

“We share poetry because we feel like these are the stories that band us together as human beings,” Smallman said. 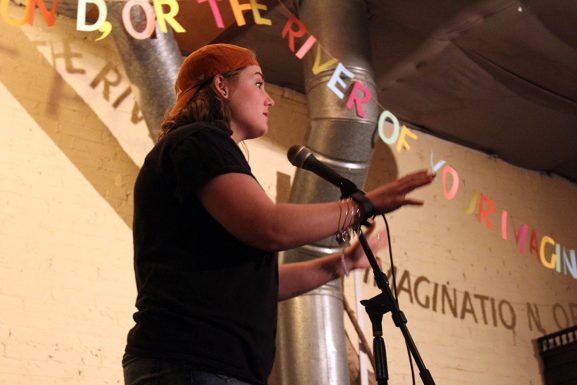 Among the regulars at The Fuze are George Abraham. Abraham is a Palestinian-American poet, student at Swarthmore College and a recent author of his first poetry book al youm: for yesterday & her inherited traumas. Abraham has guided many young poets in the organization to establish their individual voice in the slam world. Abraham praised The Fuze for creating such a safe, free and open space for him and his friends to share art and hone their craft together.

“Every time I come to The Fuze, there’s always someone new who maybe hasn’t even been to an open mic before,” Abraham said. “No matter what they spit, the entire crowd is super supportive.”

Raw, genuine and fearless words radiated throughout the room on that Friday night, striking a chord with each supportive snap of the audience members’ finger. Slammers spit about language, culture, politics, gender, identity, suicide, friendship and love.

Smallman said that the key to inspiring others through slam is believing in your own words and using your story to get someone that you have no connection with to understand you. Suddenly, one sentence allows souls to be shared.

“Words are only as good as the meaning behind them,” Smallman said. “You can have a poet say the most intricate line and it’s all crickets, but you can have a poet that says three words and it’s like BOOM. It just hits you! It’s that emphasis, that passion, that emotion that goes behind the words. That is what slam is really about.” 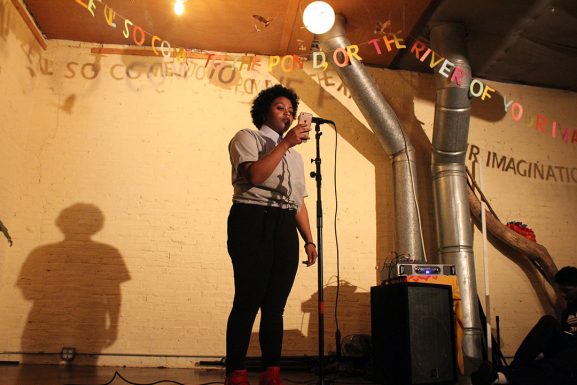 In the future, Smallman hopes to develop more workshops for both slammers and writers to improve on delivery and individual style, and help new poets find their own voice. The Fuze encourages its members to break away from traditional mainstream poets found on Youtube and create their own brand.

He also hopes to use The Fuze to inspire the greater Philadelphia community and become well known outside of the arts scene.

“My main goal is to walk up to people on the street and ask if they know about a spoken word organization in Philly,” Smallman explained, “and for one out of three of them to say, ‘Oh yeah, The Fuze!’”

-Text, images and video by Daniel Lopez and Meghan McFerran.

https://vimeo.com/67815196] Limited Internet access does not stop East and West Poplar residents from getting online. The 255 daily visitors of the Ramonita G. de Rodriguez Branch of the Free Library of Philadelphia are primarily there [Read More]

Friday afternoons at St. Anne’s Senior Community Center are never a bore. The weekly Clay Creations class, taught by Anne Koszalka, highlights many seniors’ weeks and gives them something to look forward to on Fridays. [Read More]

https://vimeo.com/49655004] The West Philadelphia YMCA, located at 5120 Chestnut St., has made some changes to its facilities in the past couple of weeks. These changes are important in order to keep the community interested. “For [Read More]