Hip-Hop music played loudly at the Hunting Park Recreation Center, where a group of young girls smiled with joy as they began preparation for their next performance.

The Black Diamond Dance Troupe was founded two years ago by Camisha Moyer, Shana Bowman and Kishna Jeantine, who serve as the dance coaches for the troupe. The dance troupe is a free, non-competitive program in the Hunting Park community that helps boost the self-esteem of its dancers. The program also educates the students on nutrition and has a mentoring program to talk about any issues the girls are facing.

The troupe is comprised of girls from ages five to 13 and meets every Friday from 6:30 p.m. to 8:00 p.m in the Hunting Park Recreation Center.

The program begins with announcements and updates about the class and then transitions into stretching and going through dance routines. The troupe finishes up the class with a mentoring segment followed by a health segment, when the coaches talk about nutrition and how the girls can make better food choices.

According to Moyer there are not a lot of options for free programming in the community for young kids to take part. Moyer said she and Bowman wanted to create a program that was not competitive but was fun for the kids.

“The Black Diamond Dance Troupe came about because of Shana,” said Moyer. “She wanted to do a dance or a block party in the neighborhood and it ultimately turned into the Black Diamonds Dance Troupe. We thought it would be a good way to give back to the community and to the kids.”

Bowman said girls do not need any previous dance experience to become a member. Some of the girls Bowman taught did not have any dance experience at all when they first joined but they have developed into very talented dancers. 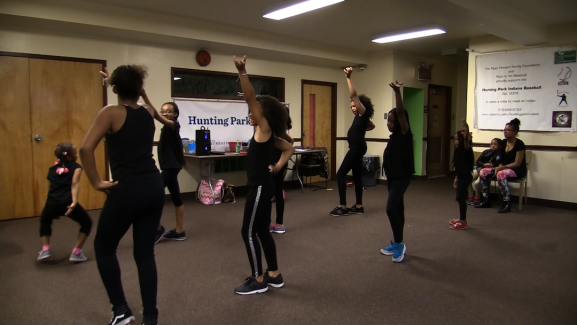 “The dance team offers our girls a sense of self-esteem and it doesn’t have to be about winning trophies or competing,” said Bowman. “They are also rewarded with the friendships they gain from the other kids in the program and they build relationships.”

The Black Diamonds Diary is the name of the mentoring portion of the Black Diamond Dance Troupe program. It allows for an environment where the girls can speak about any troubles they might have with the comfort of their friends and coaches.

“We came up the Black Diamonds Diary because we realized the girls face a lot of adversity in the community,” said Moyer. “They go to public schools, face bullying, are food-deprived and other things they may not feel comfortable talking to a parent about. The girls spend a lot of time together and we want them to turn into productive teenagers and adults. We want to have a bond with the girls because they spend a lot of time with us so it is important to know what is going on in their lives.”

Moyer said the nutrition segment of the program allows the coaches to teach the girls how to select healthy food options so they can be self-aware of how simple changes can make a difference in their diets. 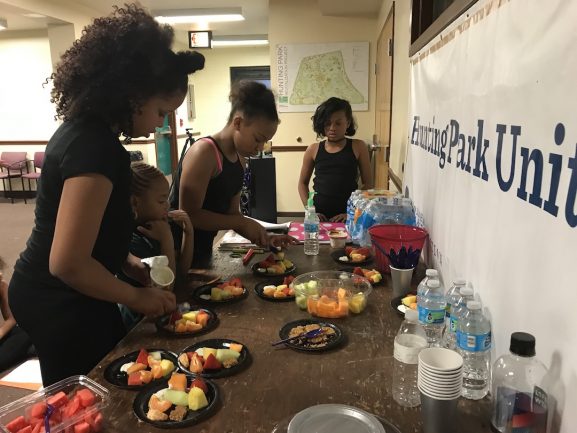 “We want them [the girls] to understand exercise, healthy eating and nutrition,” said Moyer. “In these communities, the kids face some health disparities like obesity and diabetes. There are a lot of not so healthy food choices around them every day. Some of the kids don’t like school lunches and some can’t afford to get them, so we show them ways to make healthy choices on their own.”

The Philadelphia Department of Public Health conducted a “Community Health Assessment” in May 2014. The study found that in Philadelphia, 16 percent of adult residents have been diagnosed with diabetes.

In addition, adult diabetes is more likely in Philadelphia than any other of the United States’ 11 largest counties. The study showed diabetes is most prevalent among African American adults. Bowman and Moyer use their Dance Troupe to help educate young girls about the effects of a poor diet so they can make healthier choices that will positively impact their futures.

The same study found that 22.7 percent of African-American females from the ages of 5 to 18 are obese, which is two percent higher than the next ethnic group.

While the program is in its early stages, Bowman said they eventually want to take the Black Diamonds Dance Troupe to the next level. Bowman and Moyer want to bring in as many kids as they can into the program and help give them a positive outlet in the community.

“Eventually, I want to turn the Black Diamonds Dance Troupe into performing arts,” said Bowman. “Because there aren’t a lot of cheap performing arts schools around, I want to be able to have kids come in and showcase their many talents.”

Twenty two years ago, Mantua’s only grocery store, located on 34th Street, burned to the ground. Since then, the neighborhood has never had a grocery store to call its own, forcing those living there to [Read More]

https://vimeo.com/40911602] Buying, selling and renting property are not always easy tasks, and for residents of North Philadelphia, including Hunting Park, potential home buyers and sellers may have a few more things to worry about. When [Read More]