Community members in Hunting Park and Fairhill are no longer waiting for the city to resolve the dire opioid epidemic and its residual effects that impact the health and safety of their neighborhoods.

Leaders are learning how to reverse opioid and heroin overdoses, picking up needles and drug containers from playgrounds and schoolyards, and having conversations with the drug dealers in their neighborhoods about the damage opioids cause.

For instance, at Hunting Park United’s monthly meeting for October, residents said that the neighborhood’s attitude toward the crisis — refrains of “That’s none of my business,” “That happens all the time,” and “I don’t work with ‘those people’”—need to change.

“It’s stuff that you already knew, you’ve seen for years, so why not keep up with the rest of everything that’s going on,” said Sharon Whaley, 65, who lives below Hunting Park on Old York Road. “There’s no reason to have [naloxone] available to you and don’t know how to use it.”

While the most serious impacts of the drug trade and chronic homelessness situation are often thought to be concentrated in Kensington, Hunting Park and Fairhill residents are motivated to react to its residual effects, whether they are suffering drug addition or not.

Mayor Jim Kenney issued an executive order on Oct. 19 to refocus the funding for the opioid task force, now called the Philadelphia Resilience Project, which aims to cut down on bureaucratic delays and address the needs of both neighborhoods.

“They’re doing the best they can under the circumstances,” Vice President of Hunting Park United Wadia Gardiner said. “I do think that bureaucracy often hinders more than it helps.”

Gardiner is a former emergency medical technician and recently added Narcan administration to her repertoire of emergency trainings. She said that when she was an EMT they did not utilize Narcan and instead rushed overdose victims to the hospital as quickly as they could.

Like Gardiner, other community leaders in Hunting Park and Fairhill are doing what they can to chip away at Philadelphia’s opioid crisis and motivate others to do so.

Elvis Rosado (below) is the Education and Community Outreach Coordinator at Prevention Point Philadelphia (PPP), one of the city’s nonprofit partners in its efforts to combat the opioid epidemic. 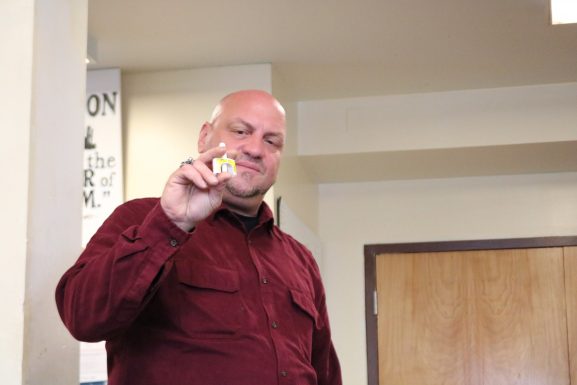 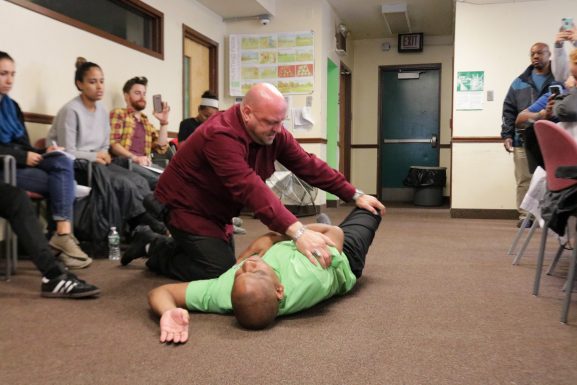 During the meeting, Fisher, above (right), demonstrated how to properly move an overdose victim onto their side in order to prevent choking on vomit if the victim is unconscious and regurgitating.

Rosado spoke of the seriousness of Philadelphia and the country’s opioid addiction. He recalled times when a first responder could not be there in time to prevent tragedy: a mother whose two sons overdosed on the same night or the family who lost their son to a heroin overdose and later found out their neighbor was trained and could have administered Narcan to him.

“The numbers are going to keep going up until we eventually do something about this,” Rosado said. “And it’s we because we can expect the government to do things, but we have a responsibility as well to educate ourselves.”

Rosado emphasized the importance of family intervention and harm prevention measures when they know a member of their household is using, and of being a neighbor who cares about whether someone overdosing on their street.

He believes that every member of the community could save a life by carrying and being trained to administer naloxone.

Now that the public is aware of the effects of opiates, Rosado said, the best way to prevent overdoses is to learn about and avoid the use of opioids, beginning with doctors’ prescriptions.

The United States has a dependence on painkillers, he said, which is attributed to doctors’ willingness to prescribe them and patients’ willingness to accept them as a fast, temporary solution for physical pain.

“Painkillers give somebody the illusion that they’re gonna go home and take one pill and all their pain is gonna go away,” Rosado said. “Pain medication was designed to make you feel comfortable with pain, not take it away.”

Rosado believes that every member of the community could save a life simply by carrying Narcan. Twenty-three people left the Hunting Park meeting trained on how to prevent an overdose death.

“You could be that hero who saves a life,” Rosado told them.

Other leaders in the community say they feel compelled to go where others won’t to help stop overdose deaths.

Charito Morales is a registered nurse and community organizer in Fairhill whose focus is helping those suffering from substance use disorder and chronic homelessness. She’s been closely following the city’s cleanup efforts to clear the remaining Frankford Avenue (pictured below) and Emerald Street homeless encampments. 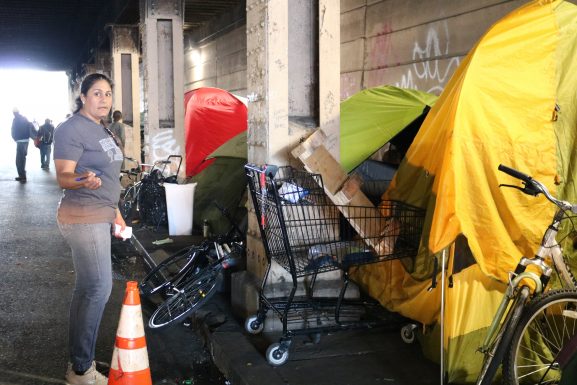 She focuses her service in El Barrio, the Latino community in North Philadelphia, which took in an additional estimated 900 Puerto Rican families following Hurricane Maria’s devastation on the island.

Morales, a Puerto Rican, followed her brother to Philadelphia 20 years ago when he was promised treatment for opioid use on the mainland, then discharged from a center that made empty promises. Puerto Ricans who come for treatment often end up in the streets for missing paperwork or running out of funds, Morales and Rosado said.

“We got to do more,” Morales said. “Because this is not stopping, this is coming. Now this is becoming and more of a problem because now we have more people coming from abroad in from other places to use heroin and buy heroin here in Philly.”

On a daily basis, Morales walks down Lehigh Avenue from Fairhill into Kensington, approaching people who appear unconscious to make sure they aren’t overdosing.

“I work on my path, my own schedule,” Morales said. “People trust me. I trust them. I don’t cross their boundaries. I can go and take them to a rehab facility, to a detox. That’s what I’ve been doing. I’m not afraid of them.”

She gives them her personal information, in English or Spanish, and connects them to any resources they are willing to accept — whether it’s water, food, a place to sleep or in few cases, treatment. Some people she recalls from days before and they chats as if old friends.

Hector Colón, 32, below, is a Puerto Rican Chester County native and is suffering from cocaine use. He is experiencing homelessness and finds odd jobs from Direct Auto, an automobile repair shop on Frankford Avenue. Colón said Morales was the first person to directly approach him to ask if he needed help one day in October. 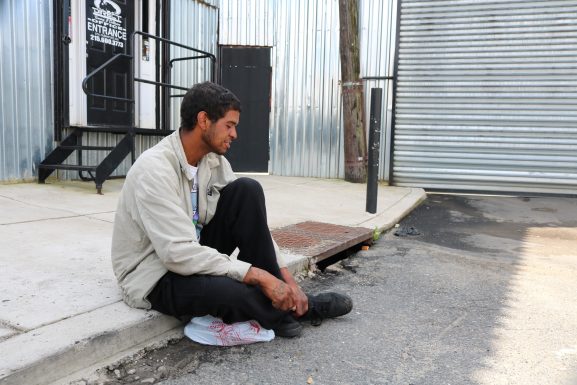 “Some people think they’re better than everyone,” Colón said.

He is hoping to overcome his substance use disorder and reunite with his 9-year-old son who is living with his mother. He was not, however, interested in seeking treatment when Morales offered to connect him. 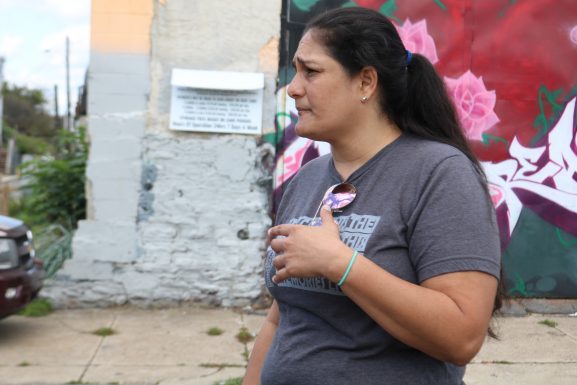 Individual organizations are attempting to address the situation any way they can, Morales said, but the city is capable of resolving some of the crisis’ biggest side effects.

“They have to hear us, we have ideas, we have all the plans,” Morales said. “Maybe it’s not different from the government, because I understand you have to follow protocols …[But] we talk to these individuals on a daily basis.”

-Text and images by Greta Anderson.

Marisol Maldonado considers Tierra Colombiana the “clothespin” of the Latino community. The 44-year-old Latina remembers going to North Philly’s Hallahan High School and telling her friends, “Meet me at the clothespin.” “It’s our hub and [Read More]

Absent parents. Incarcerated fathers. Children of violence. For parents and children in underserved parts of the city, the narrative far too often reads the same. Headlines tell of kids losing their lives too soon, a [Read More]