Cracked sidewalk pavement, dilapidated housing and trash are common sights to new visitors to the Hunting Park section of North Philadelphia and leave an impression of a community that seems to be on down times.

Hunting Park has struggled to combat the crime and drug epidemics that have surrounded the community. Recently, steps have been taken to improve the reputation and the quality of the neighborhood.

Leroy Fisher is the president and co-founder of Hunting Park United, a Park Friends Program promoting change in the Hunting Park neighborhood.

Fisher, 47, is a lifelong resident of the community and has seen the good and the bad that have come through the Hunting Park community during the past four-plus decades.

“Hunting Park was a destination where you could come to feel good about when I was a kid,” said Fisher. “You had vast space with so many programs and activities to be a part of. There were carousels, swing sets and a pool you could swim in. In my later teenage years, we lost that and it became a place of crime, poor lighting and little investment. Hunting Park went from a good place to a bad place really quickly.”

The transition of the 87-acre park and surrounding neighborhood, Fisher said, was one that took a lot of his peers with him. Fisher said there were two roads kids could take during the transition of the community in the early 1980s – the path of destruction, as he called it, or trying to do something better with themselves and their lives.

But unfortunately, Fisher said they lost a lot of kids in the community who went down the wrong path and that was a result of the Hunting Park section of the city becoming a place that wasn’t safe.

Since the mid-1960s, Mike Wilcox’s family has lived in the Hunting Park neighborhood and he spent time as a youth in the park.

Wilcox is now the garden coordinator of the 11,000 square foot Hunting Park Community Garden, which offers a space in the community for residents to grow fresh foods and become actively engaged in the community.

“I remember visiting this park when I went to school, running through the area and using the swings,” said Wilcox. “I was disappointed to see the decline of some of our lifelong residents who grew older, moved away or moved on from the area. They would sell their house or they may have rented it out and it led to the transitioning of the community.”

Fisher’s recollection of when the crime and drug problem in Hunting Park started was when he was in his early teenage years. Fisher said between 1983 and 1985, Hunting Park took a turn for the worse when drugs were introduced into the community.

“In the early 1980s our society took a turn,” said Fisher. “The cocaine epidemic and things of that nature changed the mindset of the people in the community. Sadly, some in the community took that opportunity to go to the dark side, which was the drugs and things of that nature. Because of that, the park took a huge hit and the dark side of society took over.”

Fisher’s Hunting Park United has been invaluable in giving community members a voice since 2009. The community organization’s monthly meetings provide a venue where Hunting Park residents feel they can voice their concerns for the neighborhood and feel as though they are making a difference.

Motley said the community got in the predicament because of a limited amount of resources and livable wage jobs for the residents of the community. Without jobs, Motley said, people, resort to other options to be able to sustain life for their families.

“In my personal opinion, the idea that people need to go to college isn’t for everybody,” said Motley. “When I was in school, you had woodshop, metal shop, home cooking shop and you could be so many different things from those classes, like a baker, carpenter or someone who designs homes. There isn’t much of it around anymore. If you have a job, you don’t have time to be doing drugs. If everybody is taking care of the neighborhood you don’t have drugs in the neighborhood.”

The neighborhood has gone through a period where people look at Hunting Park in a negative light based on what they have heard from outside sources. Fisher said the people in Hunting Park are working as hard as they can to eliminate the stereotypes that have surrounded the community.

“Poverty, as well as the lack of good employment, has left people to believe negative things about Hunting Park,” said Fisher. “Impoverished communities, in my opinion, aren’t bad, they just don’t have any opportunities. Take a young kid in the community for example who is struggling and doesn’t have the best schooling or job opportunities. That person cares about the community and cares about doing better, but is only presented with the negativity. I don’t think anyone wants to be part of the problem but they become a part of the problem when it seems like their options are taken away from them.”

To reduce crime and drug-related incidents in Hunting Park, the Fairmount Park Conservancy presented a master plan in 2009 that provides more positive outlets in the Hunting Park community and gets more residents into the park.

Amanda Vandenburg of Dickinson College conducted a study of whether the improvements in the park actually helped reduce crime and drug use.

Vandenburg found that there was an 89 percent drop in drug-related crime, prostitution and other crimes around the park from 2009 until the conclusion of the park revitalization in 2013.

Between January 1, 2009, and April 1, 2009, just before the founding of Hunting Park United and the start of the park revitalization, the Philadelphia Inquirer’s crime database reported Hunting Park had 74 violent crimes reported to the police, such as robberies, homicides and rapes, and 171 property crimes such as burglary, thefts and auto crimes.

The Philadelphia Police Department’s 25th District serves the Hunting Park community. Captain Javier Rodriguez, as well as his officers, have played a key role in trying to reduce crime from the area.

Rodriguez said he and his officers want to make sure community residents are aware of the precautionary steps that need to be taken to continue to reduce crime.

“Giving the community members the information they need as well as patrolling the community so our presence is known have been big keys for myself and my officers in trying to improve the 25th District community,” said Rodriguez. “For example, when a house is broken into, a crime prevention officer will go out and hand out flyers to other houses in the neighborhood to make them aware of the situation.” 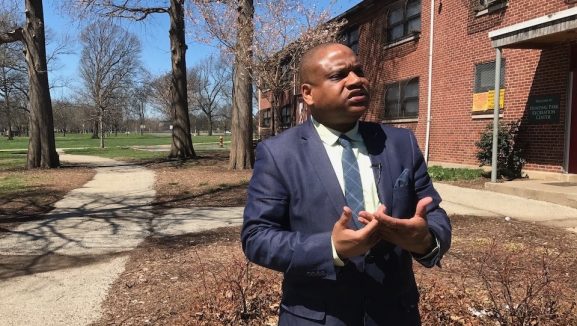 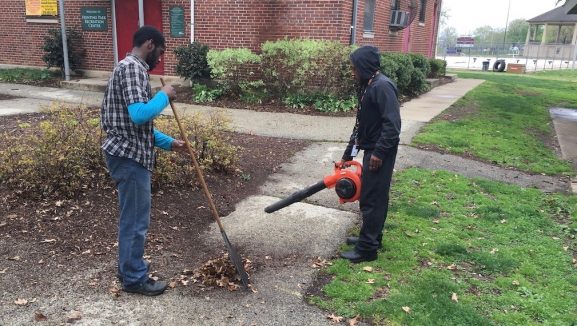 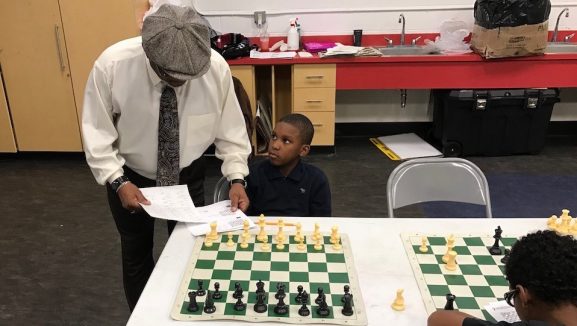 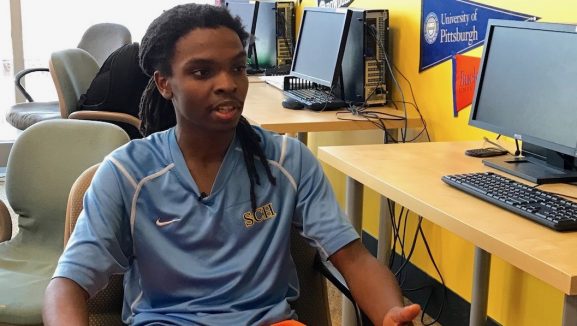 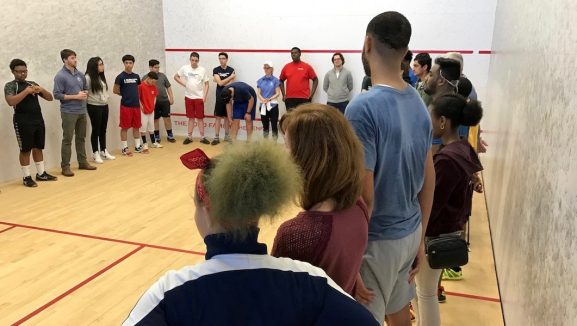 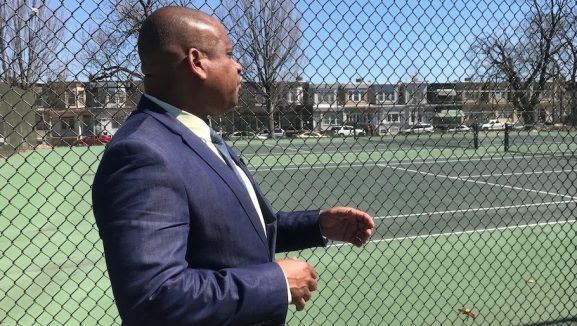 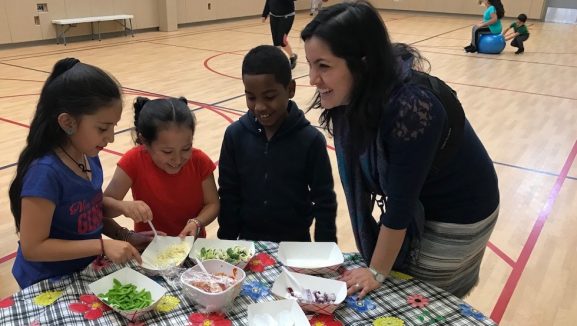 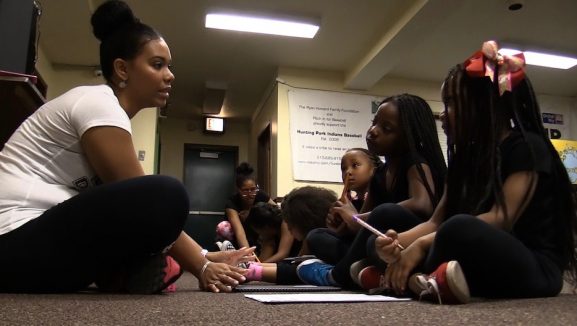 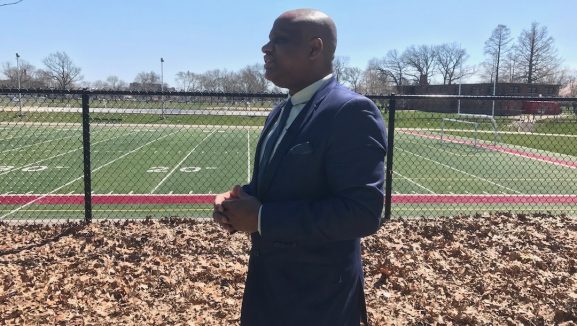 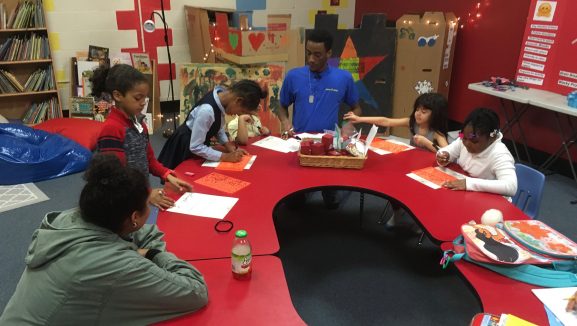 <
►
>
Leroy Fisher, president of Hunting Park United, has been leading the change in Hunting Park since 1987.

Rodriguez said the relationship between the Hunting Park community and the police officers of the 25th District is vital to the success of reducing the problems in the neighborhood. Rodriguez said he has put more emphasis on community policing and it took some time for his officers to buy into that initiative, but now it is paying dividends.

“Most of the efforts to reduce the problems we see and we face come through map analysis, so we can map out the types of crimes that are occurring and find patterns,” said Rodriguez. “We don’t want to get involved after three or four crimes have happened in a particular area. We try to react immediately after a crime event happens so it doesn’t become a pattern. We have a big district and I tell my officers that we have to focus our patrolling in certain areas and sometimes narrow down the neighborhoods we cover to be more efficient.”

As the Hunting Park community continues to push for change and safety in the area going forward, Motley said a step by step process will be valuable for the community’s future plans to completely clean up the area from trash, crime and drugs.

“Everyone who lives [in Hunting Park] is responsible,” said Motley. “I hear all of the time that the people who live there want to change the neighborhood and make it better. I think they should start with themselves and then go to their neighbors. Then once their block is clean, continue to go to each block and clean it up. If you have a block cleanup every two weeks, the block will be clean and all of a sudden you are wiping away the issues.”

Fisher wants to continue to support the volunteers who take their own personal time to be advocates for the community’s growth and development.

“There are more of us trying to make Hunting Park better than those trying to take away from the community,” said Fisher. “We don’t talk enough about the great coaches that come out and take time away from their families to coach our youth. I have seen guys invest so much time that they were limiting their own family time, but they care so much about the community and want to make a difference. We can change the mindsets of those coming up behind us by focusing on the good.”

It all goes back to investing in the community. That commitment was lost for a period of time when the Hunting Park community fell on hard times. Now, there are so many activities for Hunting Park residents to do and be involved in.

“There is now dedicated programming that allows the children to become engaged in the community,” said Wilcox. “Kids are able to come to the park and be involved in dedicated sport rather than haphazardly wandering around the park. Because sometimes wandering around just doesn’t lead to good things.”

Just because Hunting Park has made progress throughout its history with respect to lowering crime and drug use because of activism and specialized programming, doesn’t mean the work in the community is done.

“Hunting Park is my base, my foundation and my home,” said Fisher. “There is no way I would let my home fall to the wayside. I’ll always invest and try to find a way to come back and give back to the place that raised me and made me the man that I am.”

The loud sound of the collision of a rubber squash ball with a white wall reverberated around the squash courts at SquashSmarts, on the second floor of the Lenfest Center, as sweat dripped down the […]

Logan Square: Pop-up Park at The Oval Open For Four Weeks This Summer

The Oval+ returns to the Benjamin Franklin Parkway this summer at Eakins Oval. This year’s theme is “make,” “hear,” and “play.” It is designed to encourage visitors to spend more time playing, creating, and hanging […]

As a youth in Hunting Park, Kysheen Wilson was always looking for a place that he could get excited about. In 2007, the Philadelphia Police Athletic League began to use the building on N.10th St. […]