It is 4:20 p.m. and the security line at the school district’s Education Center was beginning to grumble with agitation. A mother clutched a poster-board using it as a fan as she stood in line in the heavy humid air. The small crowd took steps forward almost in unison, rushing to the auditorium hoping to get one of the limited seats.

As the group entered, the tension in the room could immediately be felt, sticking to everyone like that heavy humid air outside. The School Reform Commission budget meeting started and the agitation only grew.

Students, teachers, education advocates and community members filled the seats of the auditorium while the presiding board ushered through the meeting’s presentations. The room would erupt in cheers one second then a wave of groans and sighs would roll through the back of the hall.

Filling up four rows of chairs were members from Memphis Street Academy, a charter school recommended for closure by the school district board. They wore bright orange shirts holding up signs saying “Save Our School” when speakers of their group were up at the podium.

Memphis Street Academy is one of two charter schools at risk of closing its door due to a non-renewal contract recommendation.

“The community and our scholars will face a great lost if Memphis were to close,” Tracey McKnight, a Memphis parent, urged while speaking at the meeting.

For many years charter schools have been popping up throughout the city of Philadelphia. While the number of schools grow, the misunderstanding and lack of information on what exactly a charter school is, also rises. A school, in general, is supposed to serve as a place of learning and as a pillar in communities for families. So then, what are charter schools and why have they sprouted in almost every neighborhood of Philadelphia? 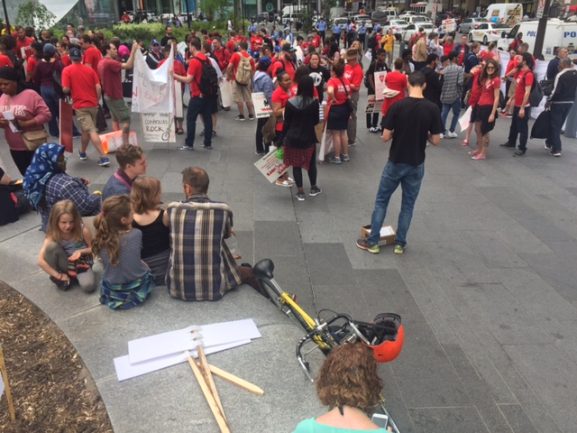 “A charter school is basically a contract,” Julian Vasquez Heilig, a professor of educational leadership and policy studies at California State University, Sacramento said. “It’s a contract involving education, the government and a private organization.”

According to the U.S. Department of Education, a charter school by definition is a publicly funded school typically governed by a group under a legislative contract with the state or respective jurisdiction. The independently operated public schools originated in the early 1990s in Minnesota. Since then, they have spread across the nation with 176 schools developing in Pennsylvania.

The Pennsylvania Charter School Law was enacted in 1997 allowed local boards of education to launch new schools that can operate freely from many local and state requirements that apply to traditional public schools. Of those 176 state schools, 86 are located in the city of Brotherly Love. According to the School District of Philadelphia, the schools were established to provide students with more educational alternatives.

Ashley Jiminez, a member of the Philadelphia organization Parents United for Public Education, has four children, three of which attend charter schools.

“A strength of charter schools is that they can structure curriculum to a certain need,” Jiminez said. “You can really pick a focus with charter schools, and I like that.”

The non-profit organizations behind the charters must undergo a rigorous and in-depth application process in order to get approval from the School Reform Commission in Philadelphia. Submitting documents is the first step towards a new charter. This includes lengthy files containing school philosophy, curriculum and academic goals, discipline standards and faculty requirements. Once submitted, applicants wait up to two and a half months before their proposal is heard in a board meeting and voted on.

In the 2014 PDK/Gallup Poll of the Public’s Attitudes Towards the Public Schools, 48 percent of Americans believed charter schools were not public schools and 57 percent thought the schools could charge tuition. When asked if students received a better education at a public charter school versus a traditional public school, 54 percent answered a definitive yes.

“People have to try to understand the difference between community-based schools and privately run schools, that’s where there the misunderstanding first starts,” Heilig said.

These types of statistics show the widespread misconception of what charter schools are and how they serve their respective communities. It leaves the question to be asked, what really are the differences between the schools, and how is it possible that charter schools have exploded in popularity, but very little is known about them?

The debate on traditional public versus charter public has waged on in the city limits of Philadelphia for quite some years. Both sides argue their choice in school should be exactly that, their choice. However there are supporters that advocate one type of school is better than the other.

Sending her three sons to charter schools was not Jiminez’s first choice.

“We originally wanted to send all our kids to public because my husband is a public school teacher and we are very big proponents of public school especially ones in your community,” Jiminez said. 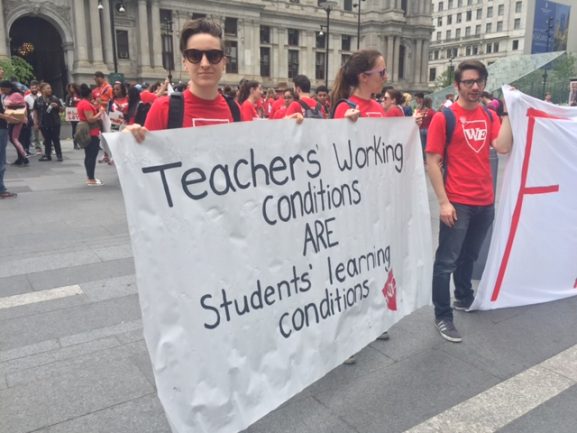 A traditional public school is the most common form of education. State governments establish school districts, which then create and manage any number of schools within its boundaries. A school board mainly comprised of elected officials by the community runs the school districts.

According to the U.S. Department of Education, charter school enrollment accounts for nearly 6 percent of all public school students in the country. To the surprise of many Americans, charter schools are in fact public schools not private. This misconception is reflected in the fact that 48 percent of Americans believed charter schools were free to teach religion and 68 percent believed the independently run schools could select students on the basis of ability when asked in the PDK/Gallup Poll. Both scenarios are false.

Similar to traditional public, charter schools do have a school board to run and oversee the schools’ performance and operation. However, this board is almost always appointed by the organization’s representatives.

Jiminez believes having that type of administration is one of the downfalls to sending students to a charter school.

“There is a lack of accountability with charter schools,” Jiminez said. “If there’s an issue that needs to go above the principal its very difficult to figure out who do I talk to.” 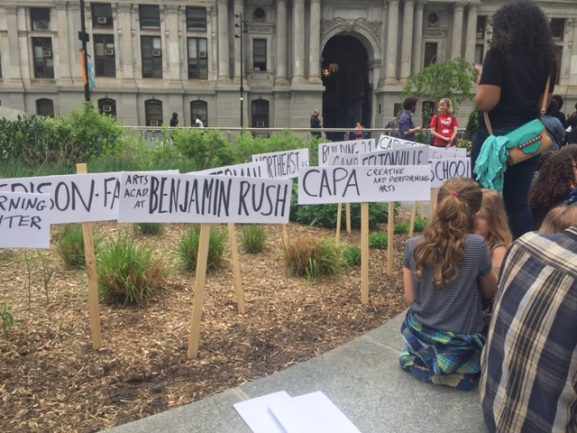 Public schools ran by the state appointed school districts have to follow guidelines and standards set by the U.S. Department of Education. Charters are afforded the ability to design their own curriculum, manage their budgets and follow their own procedures and policies. Nevertheless charter schools must abide by the applicable laws and policies put in place by the school district and give access to all students in the area.

As for funding, public and charter schools share a bankroll from the government. This is the area that receives pushback from both sides. Residents within a school district pay taxes, which are then allocated to the schools in their district at a per-student basis. The state government also hands out federal education grants. If a public school student were to transfer to a charter, so does their per-student funding.

“The elephant in the room is that the nicer of house you buy, the nicer of school you will get,” Heilig explained. “That’s money going into your school and most times it’s the poor and minority neighborhoods that get the least.”

While both types of schools share similarities and differences, each aim to resolve the prolonged education crisis in Philadelphia. 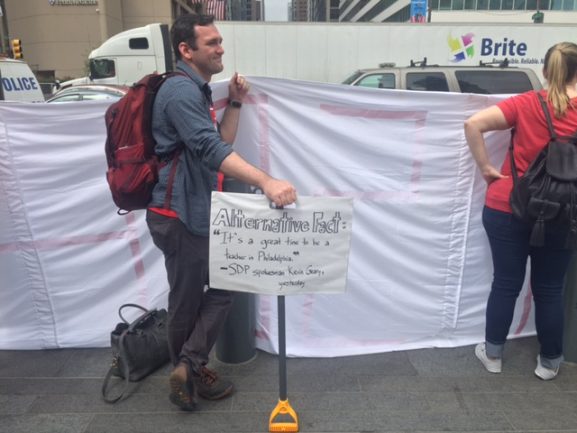 The city has been criticized for its education system as reports of failing schools, budget cuts and lack of resources have piled up over the past decade. As public schools in Philadelphia began to struggle, charter schools became the route many families took. Jiminez’s oldest son attended public school for three years before transferring to charter.

“The lack of resources and the lack of support is what ultimately drove us to the decision to pull him out,” Jiminez said.

Even as a public school supporter, she believes leaving public for charter was the best choice for her children. Jiminez still holds traditional public schools as the gold standard for education.

“One of the main strengths of public schools is that they are community staples because most of them have been there a long time, for generations, for better or for worse they have contributed something to the community,” Jiminez said.

Those in support of charter schools share a different perspective on the independently operated institutions.

Memphis Street Academy used to be known as “Jones Jail.” Once a failing public middle school in the Port Richmond section of the city, it is now part of the American Paradigm charter school system.

It had hoped that by becoming part of the district’s renaissance charter program the school would flourish, but it instead faces complete closure. Community member and teacher at Memphis, Catherine Blumenstock spoke about the progress she’s seen while teaching her students at the SRC meeting.

“I believe we are working miracles with our students, the achievement gap is closing,” Blumenstock said. “Maybe not at the rate the charter office would like, but with the challenges our students face we are making an academic difference in their lives.”

Tracey McKnight, a parent at Memphis, also made urgent pleas to the board to save her school from shutting its doors.

“How can you all rest at night knowing you’re about to destroy our children’s hearts and their education?” McKnight asked.

Heilig believes the sad truth to charter schools is that many parents run out of options after choosing them.

“Parents have nowhere to go,” Heilig said. “If they wanted to leave public then they could go to private or charter, but after charter there’s not much of a choice for education. Ultimately we need schools that are a one-way choice, accountable, transparent and support the students and parents.” 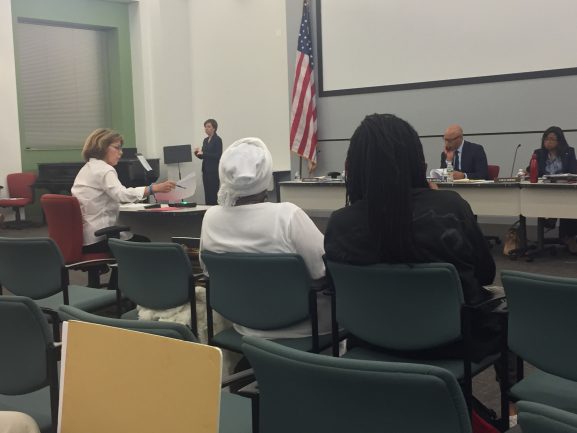 The ruling on whether Memphis will become another vacant school lot is still to be determined. Nonetheless the fight for a proper education system in Philadelphia continues.

Activists on both sides of the charter versus public debate that may always claim one is better than the other, yet both would likely agree school plays an integral role in the upbringing of a child’s life, leaving a significant impact on the youths’ future. McKnight believes a group effort is needed to truly help all students.

“Growing up I would hear my mother and other parents say it takes a village to raise a child,” McKnight said. “I agree with that because MSA is my village.”

Sometimes historic sites hide within their neighborhoods. That’s been the case for Ryerss Museum & Library at 7370 Central Ave. in Burholme Park near the Fox Chase section of the city. Built and donated to Philadelphia by the Ryerss [continue reading…]

Elijah Jones, a 17-year-old Simon Gratz High School student, makes a difference in the Nicetown Boys and Girls Club by using his leadership skills, athletic abilities and guidance, in order to improve the lives of [continue reading…]