The world had been engaged in World War I for about three years before the United States entered.

Violent revolutions broke out across Russia in response to government corruption, ultimately leading to Vladamir Lenin leading his Bolshevik party to revolt against the provisional government that was in place to put Lenin in charge of the world’s first Marxist state.

In Britain, Foreign Secretary Arthur James Balfour sent a letter to Baron Lionel Walter Rothschild in support of a Jewish community in Palestine. As visitors to the National Museum of American Jewish History know, the events that occurred in 1917 and the conversations that followed are still relevant to today.

The museum, a Smithsonian Institute Affiliate that is the only museum in the world that brings together the history of Jews in America, opened its latest special exhibit, “1917-” in March. The exhibit speaks to the importance of the year 1917 and puts the events and conversations of today into the perspective of everything that happened that year.

The exhibit comes at a fitting time, almost as a response to the rise in political turmoil and anti-Semitism that the United States is facing today.

Since Donald Trump’s election as President in November 2016, there has been a rise in anti-Semitic acts, from graffiti in the form of anti-Semitic slurs and swastikas, to the desecration of headstones at Mount Carmel Cemetery, which is a Jewish cemetery.

“I would say as a Jewish person with family members who have passed, I was worried about my grandpa’s grave and how my grandma would feel about it,” said Liz Makler, a Jewish American from Ambler, who was impacted by the cemetery incident.

According to a new report from the Anti-Defamation League, an organization working to fight anti-Semitism and hate, 2016 saw a 34 percent spike in anti-Semitic incidents across the United States from 2015, with 1,266 acts of assault, vandalism and harassment toward Jewish individuals and institutions. These acts occurred primarily during the presidential campaign. In November and December, 369 attacks took place. In 2017 so far, there has been an 86 percent increase in incidents, according to the same report.

Specifically, according to ADL’s report, there has already been 161 bomb threats reported in the first quarter of 2017, which is a 127 percent increase from the same time frame in 2016. Three cemeteries have also been vandalized.

While anti-Semitism is not a new phenomenon, it has become more public and open.

“It’s coming out because people who hate have been given license to do so by our current president who has not spoken out effectively against hate crimes,” said Rebecca Alpert, a Temple University religion professor and one of first women to become ordained as a rabbi, in 1976. 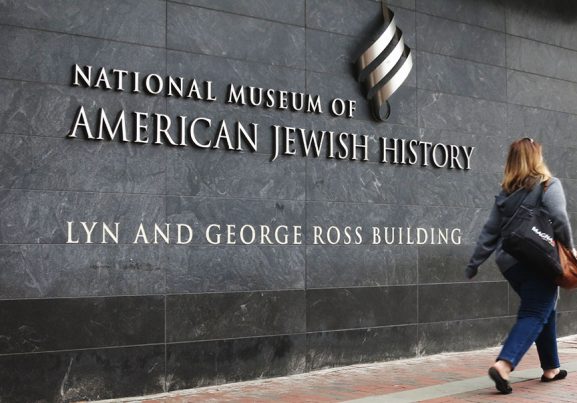 The museum has responded to this rise in anti-Semitism from a non-partisan standpoint.

“The museum should always be seen as an open and safe place for everyone,” said Jenny Isakowitz, the public relations and digital marketing manager at the museum.

She also said that the museum does not condone any kind of anti-Semitism or intolerance toward people who are different.

One of the most evident examples of this quest for love and unity is visible without stepping foot in the museum. As one walks towards the museum from the side facing Independence Hall, a large vertical banner with a white background stands out against the dark windows of the museum.

The sign reads, “Happily the government of the United States gives to bigotry no sanction, to persecution no assistance.”

The quote is from a letter written by George Washington to a Jewish congregation in Newport, Rhode Island.

“That quote is so important for us to remember, especially when we hear about acts of anti-Semitism in the news,” said Isakowitz. “It really established that, in this country, we will tolerate all religions and all people.”

Visitors are also welcomed to the museum with a giant white banner featuring varying fonts, colors and languages all saying “Welcome,” allowing guests from all over the world to feel peaceful and safe within the confines of the museum walls. People from all over the nation and world have been to the museum.  The museum is also home to the Religious Freedom statue that stands in front of the building, reminding all who pass by that the freedom to practice religion was a crucial part of our nation’s founding and is still important today.

“I love that it’s right there at such a historical part of Philadelphia that feels really meaningful to me,” said Beth Janus, a Philadelphia-based community rabbi.

The museum is located near Independence Hall, where the Declaration of Independence and the Constitution were both signed. These sacred documents both sought freedom, especially religious freedom, which was not part of life in Europe. The Quakers came to the United States in order to have the freedom to practice their beliefs since they were being persecuted in their homeland.

The Founding Fathers wanted to ensure that everyone had an opportunity to practice religion how they wanted, if they wanted to at all.

The National Museum of American Jewish History continues to add to the conversations pertaining to the rise of anti-Semitism and other issues.

“Often, we have programming that addresses current events and encourages dialogue about sometimes difficult issues,” Isakowitz said. “We always condemn any acts of anti-Semitism or acts of intolerance even though we are a non-partisan organization.”

Aside from exhibits and signs at the museum itself, the museum responded to the desecration of the nearly 100 headstones at Mount Carmel Cemetery and St. Louis’s Chesed Shel Emeth Cemetery by starting a Tumblr blog, inviting loved ones of those who are buried there, including the graves that were desecrated, to share photos and stories of those who have passed. This is the museum’s third Tumblr initiative.

“Sharing the stories behind the names of the Mount Carmel Jewish Cemetery, I have learned about successful businesses, young children who died from illness, relatives who were forces of will in their extended families, and the changing nature of neighborhoods in Philadelphia,” said Alisa Kraut, the assistant curator for the blog. “I have also shared in the heartbreak of many to learn of the prevalence of damaged and neglected Jewish cemeteries in the United States. For me, these stories are bittersweet with remembrance and past loss and highlight the importance of family.”

The blog also features news stories about the cemetery desecration. There is a story about a 6-year-old girl sending painted rocks for the graves that were vandalized in St. Louis and Philadelphia. There is also a copy of a CNN piece about the lives that are buried in the desecrated graves.

Janus believes the museum is needed, especially in such a difficult time in a divided nation.

“I think we all feel the fracture, whatever side that we’re coming from,” said Janus. “Maybe it’s been there for longer than most of us realize. But now that we’re really talking about it, hopefully in the future at some point, we can figure out how to heal that.”

She believes that talking about what has been going on is the best solution since not many people know that there has been an increase in anti-Semitism despite the mainstream media covering it more extensively in recent months. She said that it is important to start conversations with people about everything going on, especially with people who hold different beliefs, citing a conversation she had with a Jewish Trump supporter who felt oppressed for supporting Trump.

“It’s not like I want this story only to be about anti-Semitism,” Janus said. “I want it to be the story to be as part of the context of what’s going on in America right now.”

Alpert agreed that bringing issues to light is powerful.

“We need to expose and challenge hatred by speaking out and alerting our political representatives that we won’t tolerate it,” she said.