There are plenty of options in the city for a kid to participate in recreational sports.

For adults who want to continue playing their favorite sports despite being older, there aren’t as many choices. One of the options, however, can be considered a jackpot.

Philadelphia Sports Leagues has a league for 17 different sports, from basketball to soccer and even cornhole.

“We try to offer them to everybody,” league manager Joey Ianni said. “Sign up individually or sign up as teams. Go with friends, go to the bar afterwards or go to bar beforehand and come play late. We offer a lot of different variety, a lot of different options.”

The organization was started last fall as a merger between Philadelphia Sports Network and Philly Sport & Social. Ianni originally played softball in PSN and eventually got the full-time job there after his time as an umpire for the softball league.

One of his former PSN colleagues also continues as as full-time employee with Philly Sports Leagues. Marc Schlesinger was a referee for the network in 2007 and he worked his way up to be PSL’s director of operations.

Both agreed that PSN was much too similar to what Philly Sports & Social was doing, so that’s why the two organizations merged in 2016.

“We were basically doing the same thing,” Schlesinger said. “It made sense to form one company to give people a better product.” 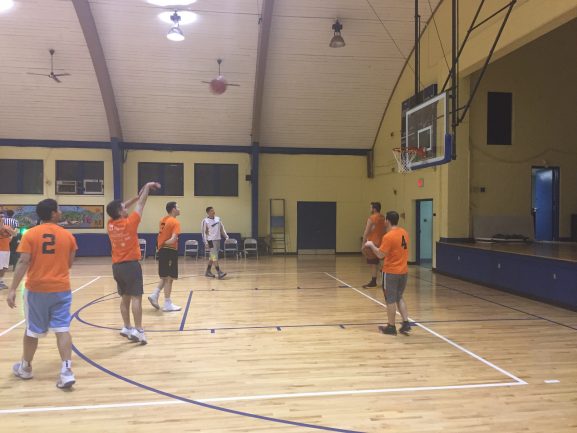 Schlesinger’s role with Philly Sports Leagues is to manage any process that the organization goes through, including scheduling. With the number of sports leagues offered, there’s a lot to handle.

“It could be anywhere from 125 to 170 leagues per season,” he said. “It’s just based on the number of facilities and participants we have.”

With that amount of leagues and the 17 sports the organization offers, there is a lot of opportunity for an adult who wants to participate. There are competitive levels of these sports and other levels that are created more for the fun of the sport than anything else.

Some bars in the city sponsor these leagues and teams and they encourage PSL participants to come hang out before or after their games.

Both organizations competed against each other for more than two decades. Logistically, that battle between the two didn’t help anyone.

Now, as both are combined into one organization, Philadelphia Sports Leagues covers plenty of area, from Manayunk to the Navy Yard, even stretching outside of the city to the Main Line.

Considering that Philadelphia is the fifth-most populated city in the country and that it provides a huge variety of sports, it would seem difficult to be able to get enough places for all of them to be played.

The organization has managed to make arrangements with more than 50 facilities within the city, however, to make it work.

“There’s a lot of different facilities,” Ianni said. “Depending on where they are located, we try to offer as many leagues as possible to get the most people from those areas and those neighborhoods to play.”

The ding of an aluminum bat echoes across the baseball diamond at Front and Moore streets in Pennsport. Parents cheer as a twelve-year-old boy races to first base, then to second. For Edward O’Malley Athletic [continue reading…]

The recreation center in Francisville looks like a fairly standard playground at first glance. There’s a swing set, a basketball court and a play set shaped like a train. However, the center is more than [continue reading…]

At the Philly vs. New York All-City Basketball Classic last month, the first game of the day – between the two cities’ best high school freshmen – was not supposed to be much more than an [continue reading…]