Contrary to its name, the wild ride that comes with owning Grace & Glory Yoga Fishtown is not always a smooth or graceful one for Brittany Everett.

The yoga studio at 2220 Frankford Ave. is home of the Philadelphia location, the other Grace & Glory is found in New Jersey, and opened in 2015. Everett currently instructs classes there and handles the management side of the business, regularly splitting her time between Philadelphia and New York for several days each week.

“A typical day would be…you would need a lot of coffee, let’s just start there,” she laughed. “I teach a class or I’ll practice, and then there [are] meetings and community meetings that I’ll pop up at. When I’m in New York I get to do all the behind the scenes stuff that no one really sees and no one really knows about, so I’m really lucky when I get to just sit down and be behind a computer. The times that I’m here, I spend a lot of time in the studio, face-to-face, and I’m here for every class.” 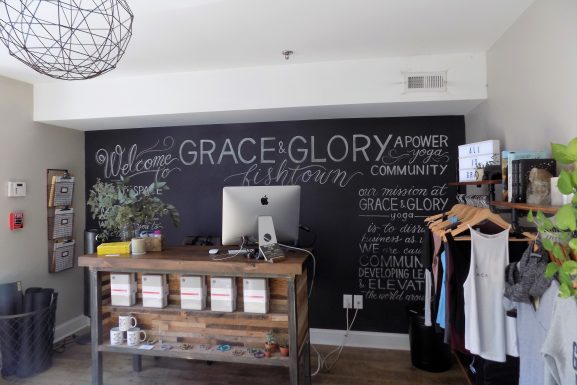 Everett first discovered her love of yoga upon graduating from Juniata College in 2010 and returning to her hometown of Linwood, New Jersey. A small studio opened up down the street from her childhood home. Everett’s mother, who had just lost both of her parents and was struggling with being newly retired, asked her daughter to accompany her to a class. Everett, who says she was desperate to connect with her mother at the time, reluctantly agreed.

“By the time I finished that class, I was a full convert,” she said. “Then I started practicing religiously — one, two, three, four, five times a week, and I never looked back.”

As fortune would have it, that hometown studio played a large role in bringing Everett’s yoga journey full circle.

“The tiny studio at the base of my childhood home was called Grace & Glory,” she said. “That’s how I first was introduced to Grace & Glory Yoga. I did my teacher training [there] and then we opened a studio maybe about three blocks down, and I became the director.”

As the years went on, demand for Grace & Glory increased. Eventually, Everett and Alexandra Nunzi, the studio’s founder and owner of its Northfield, New Jersey location, decided it was time for Everett to close the space in Linwood. As soon as they opened the Fishtown studio, Everett knew there was something special about the area.

“I knew that Fishtown was where I needed to be because the people that are here [are] so loyal,” said Everett. “So much of our vision and our mission is community and connection, and it seemed really right to be here. It wasn’t about people just coming in for a workout — yeah, they wanted to sweat, but they wanted to meet new people and make connections. They wanted friends and to create new family. So that’s what we’ve been creating here.” 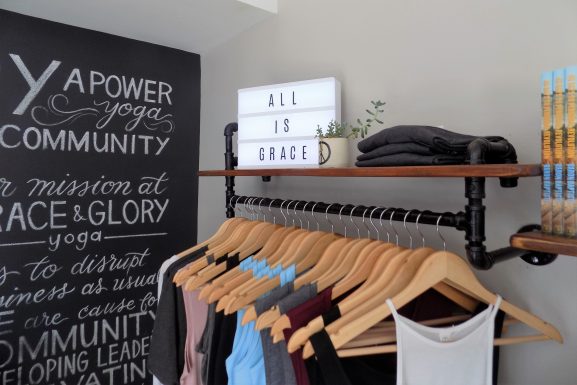 Gillian Powell, an instructor who has been with Grace & Glory for seven years, agrees Fishtown was the right fit.

“I think the studio fills a void the community had,” said Powell. “There’s a lot of businesses and restaurants but not a lot of places to go into and relax and be yourself. People can come here for a benefit to themselves.”

Grace & Glory offers a wide variety of classes for all levels of ability, but the Baptiste yoga methodology is the common thread that runs through each class. According to the Baptiste Institute, this type of yoga was founded in the 1940s by Walter Baptiste and his son, Baron. It uses the transformative tools of self inquiry, physical practice and meditation techniques to empower students and to help them achieve consistent results in all areas of their lives.

“We are a Baptiste affiliate studio, so ninety percent of our classes are based off of the methodology,” said Everett. “This practice is designed to empower and awaken all of us so that we can live into our fullest potential.” 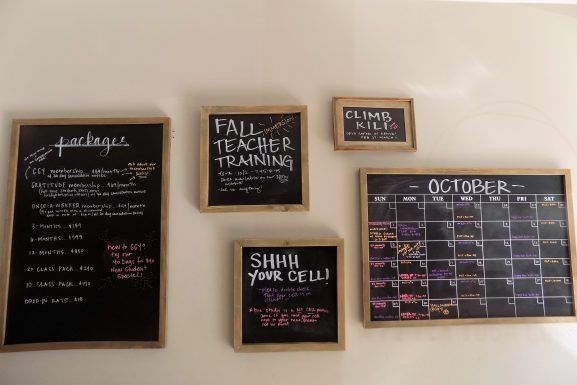 Everett sees her role as instructor as a way for her to make a lasting impact on her students, the community and beyond. She says the most rewarding part of the job is watching people’s lives change through the physical movement of yoga. Additionally, Everett plans to put her training and background to use when she, her mother and a few other Grace & Glory employees travel to Kenya for two weeks in February on a service trip  with Africa Yoga Project.

“Paige Elenson, who is the founder of Africa Yoga Project, has made it her mission to take Baptiste yoga into Nairobi and all over Africa as a means of providing youth with job opportunities,” Everett said. “So she’ll bring them in, she’ll teach them and then they go out [and teach yoga to others]. Not only do they have the opportunity to come out of the slums and making their way through [crime], but she’s given them the opportunity to work for their money and take yoga to a ton of people, children and adults, [who] need it.”

In order to involve Grace & Glory’s students with Africa Yoga Project and the upcoming trip, the studio held several fundraisers for the organization throughout the fall. In October, Everett and studio manager Sarah Kunst co-facilitated a two hour master class event that included a short film screening.

“[Students] can really see that what we do here in this small 35 to 40 person studio actually makes a huge difference on a global scale,” said Everett. “Them showing up makes a difference in the whole entire world.” 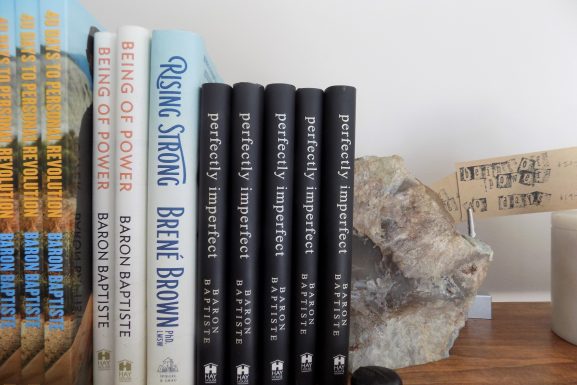 As for the future of Grace & Glory, Everett hopes the company will expand to open more studios and grow its student base. Her goal is to reach a point where the Fishtown studio is packed wall to wall for every class offered.

The yoga instructors see firsthand how Everett’s impact extends beyond the walls of the studio.

“[Brittany] helps guide everyone,” said Powell. “She keeps both us, the instructors and the people coming in levelheaded. What we teach here can go past the studio and help people at home.” 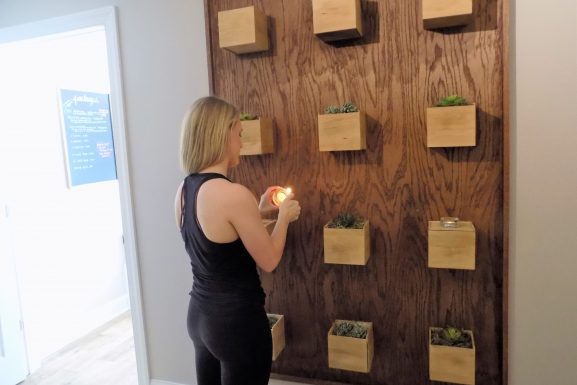 Everett gives equal credit to her team for helping Grace & Glory get to where it is and putting in the work for the business to continue to flourish.

“I am so blessed to have the team that I do,” said Everett. “Every single person on the team really has an investment to the community, to the people that we’re serving, and that’s how it works. We have great communication, we all have passion, [and] we all know that we’re here to change lives.”

— Text, images and video by Austin Albright and Morgan O’Donnell.