The CDC opened a Job Readiness Center to help job seekers in the neighborhood. A $540,000 grant from the Institute of Museum and Library Services, awarded to the Free Library of Philadelphia in 2016 and matched by donors, furnished the computer labs on Paschall and Woodland avenues. 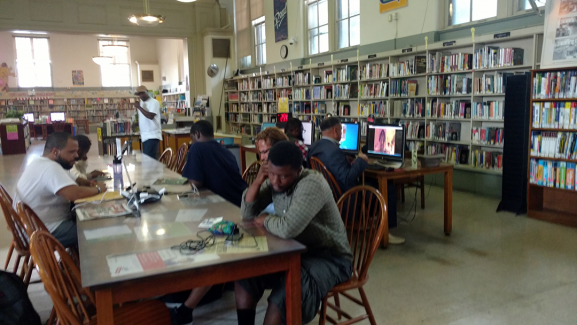 Applicants search for jobs at the Paschalville Branch

Southwest Philadelphia has seen demographics shift over the decades. Currently, it is a community with various immigrant groups from Asia and Africa, along with a legacy population. Some residents have criminal backgrounds. The CDC estimates unemployment in the neighborhood hovers between 15 and 20 percent. Other employment barriers include education, unfavorable credit profiles, while transportation needs can preclude jobs in the burgeoning suburbs.

“There was a tremendous need in the community for services for job seekers,” said Annette Mattei, who serves as project coordinator. “It’s a community that’s low income, low skilled; many people are chronically unemployed.”

Mattei began working with the Free Library on this project in 2013, planning with graduate students at the University of Pennsylvania’s Fels Institute of Government. 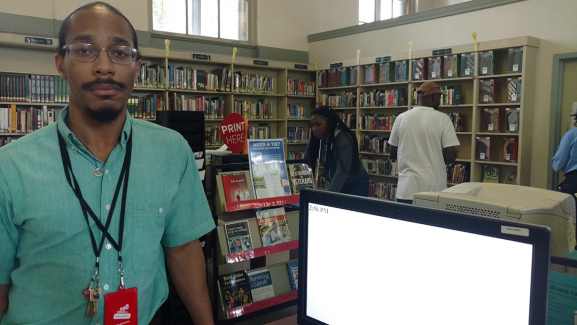 Omelio Alexander at the Paschalville Branch of the Free Library

Part of the challenge for some applicants is a lack of familiarity with basic computer usage. While younger residents have grown up in the advent of computers and the Internet, support staff noted this familiarity doesn’t exist among older groups.

“The older ones are more uncomfortable and feel threatened behind the computer because they don’t have those skills,” said Cynthia Ryant, employment specialist at Southwest CDC. “Just the little basic computer skills that we take for granted [like signing on to Gmail] because we’re using computers. If they hadn’t been placed on a computer to do those specific jobs, they lack those skills.” 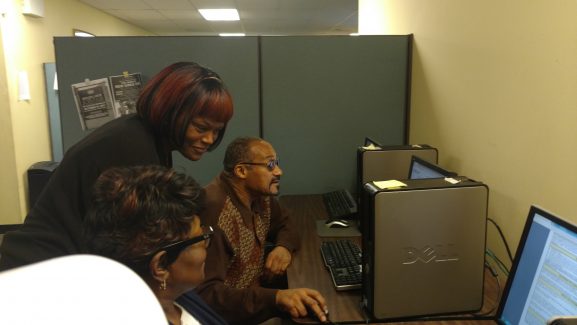 “They showed me a lot of things I didn’t know,” participant Barry Garnett said.

Creating a resume and uploading it to LinkedIn posts can be daunting for residents. Ryant hopes funding will create sustainable attendance beyond the camps to help residents find sustainable work.

On the corner of 54th and Overbrook, children waited for a ride home. Having abandoned their coats, little boys and girls laughed and played outside the Wynnefield branch of the Free Library. Inside the library, chairs [Read More]

On Saturday afternoons throughout the summer, the Cobbs Creek and Haddington branches of the Free Library of Philadelphia host Philly Bop dance classes. The bop is a style of dance that was popular in the [Read More]

The Free Library of Philadelphia has a new branch, but this one has rims, wheels, brakes and a box full of books above a three-speed handlebar. Known as a “Book Bike,” this new outreach initiative is [Read More]