Nearing the end of his campaign for the November 7 election of new district attorney in Philadelphia, Larry Krasner doesn’t get a day off.

The long-time defense attorney is recognized in Philadelphia and beyond as a man who has sued the city’s police department a whopping 75 times, representing individuals and groups including ACT UP, Black Lives Matter, and DACA Dreamers. Now, he hopes to work with them as the city prosecutor.

On Saturday, Oct. 28, he attended events spanning the city’s geography. He walked-and-talked in North Philadelphia and in Kingsessing, to connect with voters and hear the concerns they had in their neighborhoods. 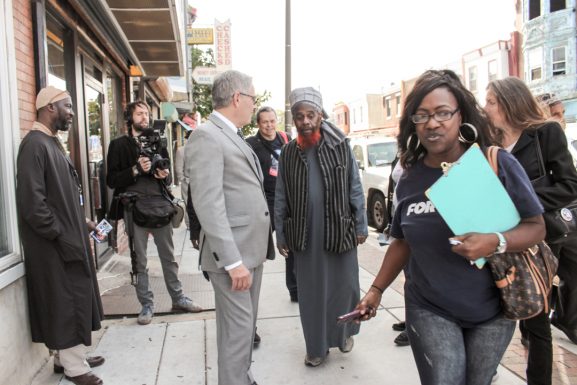 Krasner is a surprising candidate to many, on the basis of his career as a defense attorney – but he sees no problem with switching sides, drawing a comparison between himself and Carolyn Temin.

“She wanted to do criminal justice, that’s all” Krasner said of Temin, a Philadelphia judge. “I mean, I kind of feel the same way.”

Temin served as both a defender and a prosecutor before her election as a judge, and has gone on to teach judiciaries around the world about trials on international human rights violations.

Krasner considered a career as a prosecutor, but ultimately settled on beginning his legal career as a public defender in Philadelphia. He went on to open his own practice, Krasner & Associates, which recently merged with Greenblatt, Pierce, Funt and Flores, LLC.

“I don’t see any contradiction in being on both sides, as long as you’re always trying to do the right thing,” Krasner said. “Which is, make sure rights are upheld, the outcomes are fair.” 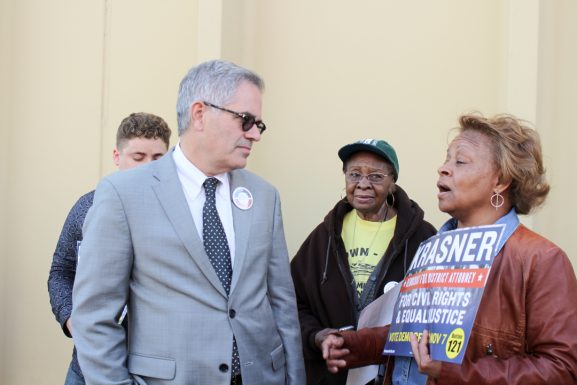 Kairol Rosenthal, who started volunteering for the campaign this spring, agreed.

“A lot of people have highlighted that he has not worked before as a prosecutor,” Rosenthal said. “I, however, actually think that it’s a great asset that he has not been part of the District Attorney’s office thus far in his career because I think that there’s serious change that needs to happen in that office and that change needs to happen from an outsider doing it.”

Before the primary election in May, Rosenthal met with many of the candidates to discuss the issues important to her, including victims’ rights.

“Larry was actually the last person that I met with, and we spoke for almost an hour and a half,” Rosenthal said. “It was just so clear to me that, unlike many other candidates who were just starting to lean progressive, this is kind of the fabric of who Larry is and the work that he’s been doing for the last 30 years as an attorney and in serving the community.”

Another volunteer, Robert Boyden, was dedicated to the campaign despite his inability to cast a vote – he lives just outside of Philadelphia county. A construction worker by day, he felt so strongly about Krasner that he volunteered his time anyway.

“He’s a really good, down-to-earth guy,” Boyden said of Krasner. “Everything that he says, I agree with.” 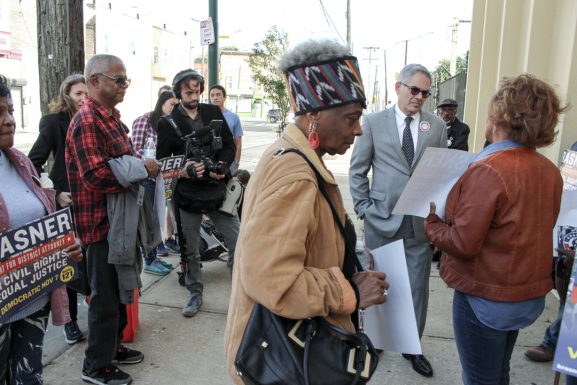 The first walk-and-talk started a little late. Krasner was on his way from another event as organizers managed the small crowd that had gathered at 22nd and Lehigh.

For about two hours, Krasner visited businesses along the 22nd Street business corridor, shaking hands and pausing for photos along the way. Volunteers passed out fliers and encouraged people to get out the vote.

Around 2 p.m., Krasner finally got a short break for lunch before heading into a meeting at the nearby Municipal Services Center, then straight on to his second walk-and-talk event.

Organizers assured the group outside the Kingsessing Library that Krasner was on his way. He was stuck in some traffic, they said, but encouraged the group to start walking to later be joined by Krasner.

Sure enough, Krasner reappeared a few blocks down the street and joined in on what would become a mile-long walk to the Schuylkill River Trail accompanied by chatty, curious residents, several journalists and event organizers who expressed concerns about safety in certain areas of the neighborhood. 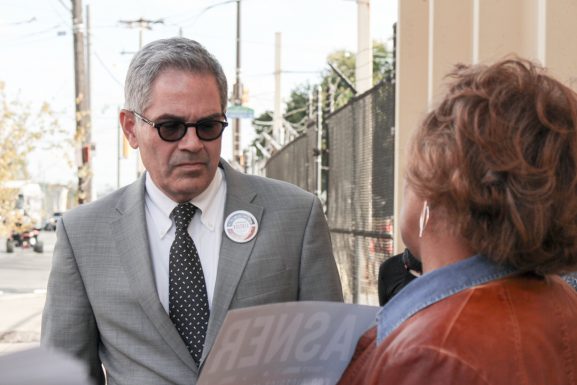 Train whistles sounded nearby as citizens came out of various buildings and asked questions about Krasner’s positions on issues, questions that had been answered moments before and questions that weren’t obviously related to the task at hand – choosing a new district attorney.

Krasner remained a patient and collected through it all.

“I feel a little like that freight train over there,” Krasner said, as the crowd dispersed. “I’m movin’ slow, everything’s a little creaky, but we’re carrying a heavy load a long way.”

Although the campaigning days are long, Krasner still remains positive.

“I do feel tuckered out, but I would be the biggest jerk in the world if I complained because I think this movement is important,” Krasner said. “I think what they are gonna accomplish is important, with or without me. And there are a lot of candidates who have not been fortunate, as I have. So, I’m doing just great, thank you.”

-Text, images and video by Caitlyn Heter and Linda Sheppard.

Center City: “We Have an Ongoing Need to Increase the Quality of Our Political Leadership.”

David Thornburgh may have Pittsburgh roots but his passion lies on the other side of the Keystone state in Philadelphia politics. As the President and CEO of the historic Committee of Seventy, a non-profit organization [Read More]

The Liberty Lands committee wakes up early many Saturday mornings not to drink coffee and relax but to plant trees, clean up trash and pull out weeds from more than 30 garden plots. Liberty Lands sits [Read More]

https://vimeo.com/65415914] Philadelphia’s Office of Property Assessment has implanted a new property tax reform effort, the Actual Value Initiative. Under this reform, many are paying more in property taxes as the values of most homes have [Read More]