Sometimes it is two milligrams, other times four. It depends on the doctor’s orders.

She will prick the patient experiencing an overdose with a syringe. The liquid that would more than likely save their life flows into their veins, as they lie on the gurney blue in the face unresponsive and seemingly lifeless.

Freeman is a registered nurse at the Emergency Room at Jefferson Frankford Hospital. Reversing opioid overdoses can be an everyday task, she said. 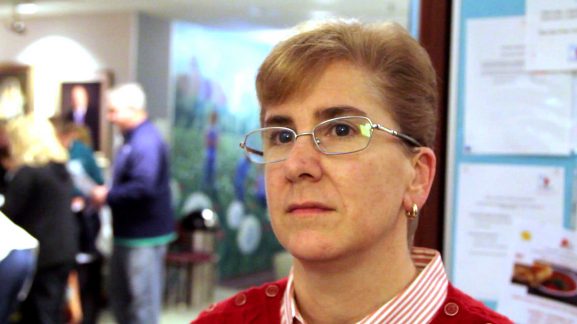 From the ER, she has seen the number of opioid overdoses in the Northeast section of Philadelphia skyrocket over the past two years firsthand.

“We’ve literally had patients we’ve removed out of cars with needles sticking out of their arms, in our parking lot,” Freeman said.

In 2016, according to the Philadelphia Department of Health, 104 individuals in the Northeast region did not make it to a gurney like Freeman’s or did not receive a dose elsewhere. 80 percent all drug deaths in the city involved opioids, the Northeast Times reported. Naloxone, commonly referred to by the brandname Narcan, is increasingly being issued by the city to some police officers and even librarians in Kensington. 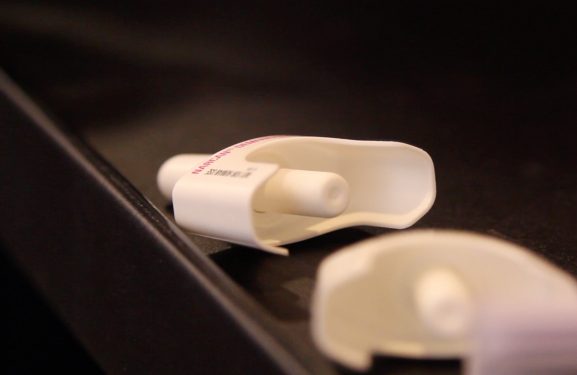 The drug immediately reverses the effects of opiates like heroin, and synthetic iterations of the drug known as opioids, which have become increasingly prevalent in the Philadelphia. Freeman said the synthetic opiate fentanyl remains the most deadly.

She has been a nurse for two years. The job is rewarding, she said, but she is growing increasingly frustrated.

“Narcan is a great to reverse the effects of opioids, but it’s a Band-Aid on a really big problem,” Freeman said. “You’re not fixing the problem, unfortunately, you’re just prolonging the inevitable.”

That is why she decided to come to one of a series of community forums on the epidemic in Fox Chase at CORA, or Counseling Or Referral Assistance, which provides a host of community services, including addiction treatment.

Freeman says her frustration begins when her patient regains consciousness.

“The first thing I have to do is reassure them that they’re not in trouble, I’m not the police, and all I want to do is help,” she said, adding many times the patient is startled and will rip out their IVs, leaving the hospital for fear of arrest. “Legislation needs to be put in place that when someone returns consciousness and wants to go to rehab, there is something we can do better than just handing them a packet and say, ‘Here you go, check out this place.'”

She wants the power to do more.

“I’m supposed to protect my patients, I should be able to make a contact, reach out to someone, say I have a patient who really wants rehab, can I send them to your facility?”

Freeman’s perspective is one of about 30 in the room the night of the community forum at CORA. Others included family and friends of addicted individuals, along with those in long-term recovery and concerned community members. After the forum, everyone in the room was trained in administering the nasal spray form of Narcan, receiving one dose to take home, free of charge. 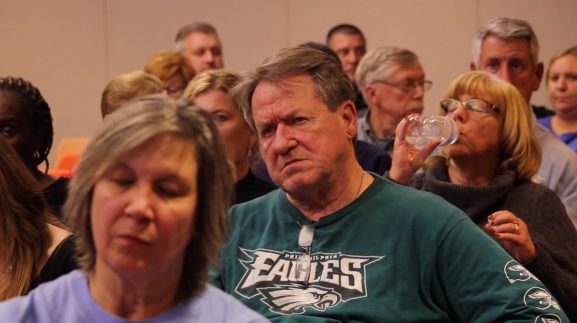 Mary Doherty, the director of government and strategic partnerships at CORA, addresses the room. She matter-of-factly flipped through slides discussing the scope of the epidemic, especially in the Northeast.

“Deaths involving heroin, fentanyl, pharmaceutical opioids and benzodiazepine are all on the rise,” she told the audience. Her mantra of the evening was “KNOW drugs in the Northeast.” The predominantly white blue-collar neighborhoods, especially further north, have been slow to acknowledge that drugs are in their community, she said:

The citywide data for 2016 overdose deaths indicates white individuals were at more than double the risk of black and Hispanic individuals, although all races saw an increase in the year. Men from 25 to 59 were most at risk, the data says: 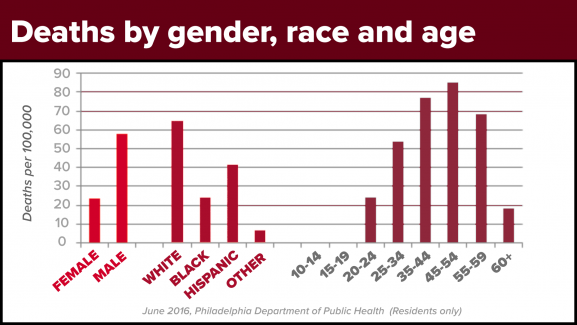 Although the data skews older, meanwhile at CORA, seven teenagers in recovery are receiving their high school education.

“The teenager’s mind is always changing, and when you put drugs into the equation, you have to teach them differently,” Doherty said, adding, “[At their former] high school, it’s too easy to fall back into it. Especially when your dealer sits next to you in math class.”

CORA is temporarily housing The Bridge Way School, a recovery school operated by the Greater Philadelphia Association for Recovery Education.

As opposed to a traditional schooling environment, their goal is to foster a therapeutic, individualized educational environment. Rebecca Bonner, the Head of School of Bridge Way and the Executive Director of G.P.A.R.E., said that such an environment greatly reduces risk of relapse.

An excerpt from a phone interview with Bonner:

Now, Bridge Way has its sights on expanding.

The Pennsylvania Legislature passed a new omnibus school code bill earlier this month that allocates funding for a pilot recovery high school for the state in the Philadelphia region.

“The Department of Ed should be dedicating a school for that program very shortly, obviously we hope it’s us, we don’t know of any other school it could be,” Bonner said. Due to space limitations at CORA, the maximum number of students Bridge Way can accept is 12. If chosen by the state, Bridge Way would have the funding to accommodate as many as 30 students at a new location.

Back at CORA’s community forum, Doherty thinks that curtailing the Northeast’s opioid problem starts with prevention.

“Look at how many kids are not using drugs,” Doherty told the audience. “Prevention works. It just does. We just need to find out how to replicate that success.”

Another component in curtailing addiction, Doherty says, is strategic communication between the communities of the Northeast.

“That’s where it starts. We’ve acknowledged there’s a problem, there are indeed drugs in the Northeast, now comes the next step.”

Meanwhile, from Freeman’s perspective, there should be more resources for individuals in recovery, preventing relapse and fostering long-term recovery. She said a patient of hers has been sober for two weeks, but his future remains uncertain.

“There are not a lot of resources now that he can go to,” she said of the man, who she said is homeless. “He doesn’t want to go to the shelters because the shelters aren’t always the safest environments, and I don’t think we do a great job of providing places for the recovering to go to. Because the recovering is a very small piece. When you go out on the streets, it’s so easy to fall back into old habits.”

Activist Charito Morales said she does not affiliate with a specific community organization because it distracts from the issues at hand in the Fairhill neighborhood. Morales is a registered nurse and has been volunteering in [continue reading…]

Frankford native Chris Gulledge strongly believes that unlike Batman and other fictional characters admired by children, fathers are the real heroes. Once a struggling single parent, Gulledge knows first hand how difficult parenthood can be [continue reading…]