Every Tuesday and Saturday, Kinji Ridley parks his car and unloads boxes of groceries from the trunk, handing them over to volunteers who set them up on benches and picnic tables.

A line of dozens of West Philadelphia residents forms and they each pick out bags of food, assembly-line style, before dispersing and going their separate ways.

Ridley is the executive director of Community Solutions, a private, grassroots West Philadelphia-based organization. It seeks to strengthen its community through programs like Feeding the Community, which provides free groceries to West Philly residents at four different locations.

Ridley launched Feeding the Community last June after he went to Brown’s Family Shoprite asking for donations of excess food. Since then, Ridley said he’s only missed four distribution days.

“The couple of Saturdays I’ve missed, trust me, I’ve heard it because they were already just scraping by,” Ridley said. “This is a godsend to them. They actually have someone who is giving them stuff they can use and cook right now, not just toss-away stuff.”

In 2015, the median household income of West Philadelphia neighborhoods was less than $40,000 and the area has faced high concentrations of poverty. Residents deal with issues like food insecurity, finding affordable housing and employment and low wages.

Ridley, who grew up around 59th Street and Haverford Avenue, said he has seen how his neighborhood has changed and he wants to help people survive.

He is passionate about grassroots activism within his community. He said his prior experiences with other organizations frustrated him because they tended to focus less on “boots-on-the-ground involvement.” 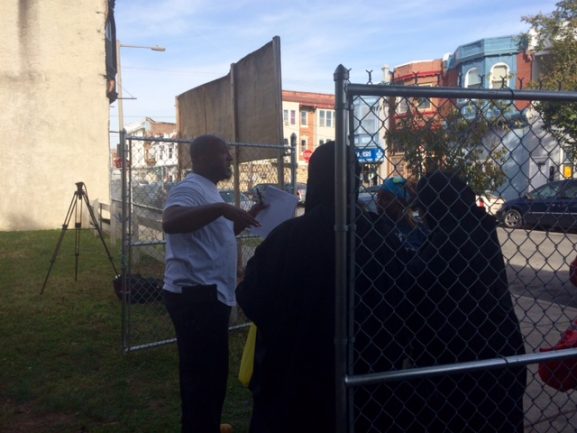 Community Solutions collaborates with other grassroots organizations, like Muslims 4 Humanity, which helps to distribute groceries outside of the Masjid Mujahideen

Abdul-Khabir, a Cobbs Creek resident and father of three added that food deserts and access to healthy food is a problem in West Philly.

“We don’t have enough places that give good food to our people,” he said. “You can buy sodas and cigarettes anywhere.”

Ridley said fresh, healthy food is not as accessible or affordable at local grocery stores and he wants to make sure participants take as much as they want. 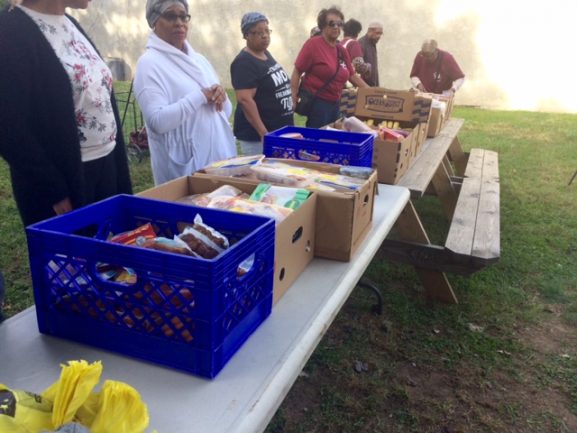 Abdul-Khabir hopes Feeding the Community will be able to serve about 100 residents by December by getting more sponsors and donations from other grocery stores, like Trader Joe’s and Whole Foods.

“The city of Philadelphia needs to be more in tune with the community organizations that are doing this,” he said.

He believes that government should be more active and aware of issues surrounding food insecurity and those who are working to solve them.

Ridley also hopes to serve more people, but the logistics can be tricky. He would need a bigger car to transport all the food, more volunteers and more people to actually show up.

To connect people to the program, both Abdul-Khabir and Ridley utilize social media to get the word out. They often livestream on Facebook each time they begin grocery distribution to let people know where it is and what food is being provided.

Ridley said food banks like Philabundance often require people to come to their central location, but many only have access to public transportation or walking and can not conveniently make the journey there and back with bags of groceries.

Marla Oliver is active in her community and often volunteers with local initiatives. Abdul-Khabir connected her to Feeding the Community and she began helping the program in October. Oliver said food tends to run low toward the end of the month when people’s paychecks or benefits begin to deplete.

Struggling to provide food can take an emotional toll on families, she added.

“There’s a sense of embarrassment sometimes, but sometimes it helps to just knock on the door, say hi to your neighbor and share the resources that you can,” Oliver said. “Food is a basic need and when you’re not able to make that reach, sadness comes in, they don’t want the neighbor to know, ‘Hey, I’m not able to make it.’”

Food insecurity can be alleviated by local organizations like Community Solutions and other support networks, but they are not a permanent fix. Oliver said liaisons like block captains may be able to help communicate these activities to the government.

“City Hall is there and we’re here,” Oliver said. “Policies and procedures sometimes take over and that’s where the disconnect comes. A lot of it gets lost in terms of real living.”

– Text, photos and video by Lian Parsons and Owen McCue

Walnut Hill: West Philadelphia Library Develops the Community One Family at a Time

Russell Smith spent his childhood taking care of horses and milking cows on his family’s farm in Virginia. His father nicknamed him “Cowboy” for the work he did. At 62 years old, he’s still known [continue reading…]

[vimeo 59468918] The Lam family took a chance. They pooled together their money to open a restaurant, named Saigon Cuisine, and entrusted two brothers, Then and Len Lam, to make it successful. “We know we can [continue reading…]