Stephanie Koenig, 36, moved to the East Kensington area with her husband, Lewis Colburn, in 2009. The couple, both sculptors who found studio space in Philadelphia, bought a house across the street from Letterly Green, an empty plot of land that spans half a block long, two years later.

Along with their next-door neighbors, Onais and Melissa Dickson, they became involved with the East Kensington Neighbors Association’s effort to stop the open space from being developed. According to EKNA’s online fundraising page for the project, Letterly Green is one of the oldest and largest open spaces left in Kensington.

“We have a patchwork of green spaces in East Kensington already and they all have different roles in their little block radius,” said Koenig. “The thing that was different about Letterly Green is that it was always just a big, green open space. So we wanted to preserve that character.” 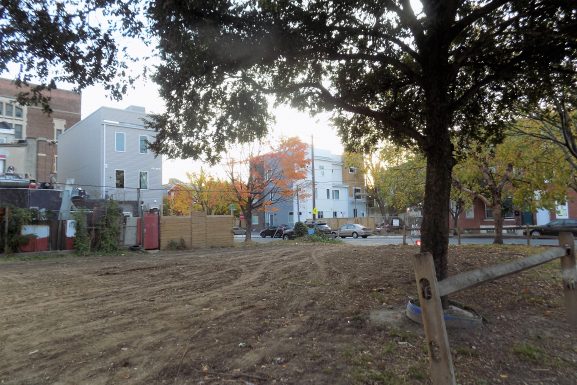 The stretch of land that spans the 2000 block of Letterly Street and the 2400 block of Amber Street is a mix of private residential properties and publicly owned properties. In 2012, community members met to decide what the future of the open space would be.

“Basically half got unified and sold to a developer, and half is under the auspices of Parks and Rec now, which is kind of miraculous because that means it’s going to stay green,” said Colburn.

The campaign to preserve Letterly Green has been ongoing for several years, but it just recently started to gain traction and move closer towards completion.

“The project has been on and off for about a decade,” said Onais Dickson. “I’ve been involved with the association since 2015 and this project for the past year. It started to ramp up a lot in the past eight months or so.” 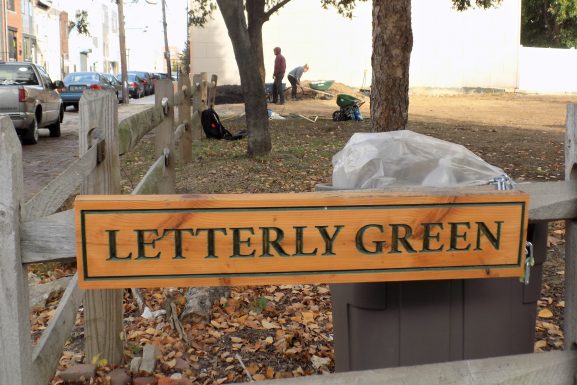 EKNA members are having an ongoing discussion about whether a green park space is the right decision for the neighborhood.

“We’ve been having a conversation internally about it,” said Melissa Dickson. “What are the commons? If there’s a need in the neighborhood for an auto body shop, who are we to make it pretty? But [we] think it’s useful for kids to come and play. It’s the only area where they can come to run back and forth.”

The vision for Letterly Green is an open space for children to play and neighbors to enjoy. When the space is finished, according to the online fundraiser page, it will have upgraded fences and sidewalks, a paved path running through the grassy lot, more trees and new benches.

EKNA created the Friends of Letterly Green group to gain support in its goal. And although the group secured funding from Cedar Hill Foundation to get off the ground, it started a fundraiser campaign to raise $30,000 still needed for physical improvements, greenery and finishing touches to the space. Donors who reach a certain level through giving can have their name inscribed on a paver brick, displayed on a marquee sign in the finished park and receive other forms of recognition for their involvement.

“A lot of [the process] was behind the scenes work for a long time and making sure we had enough community interest and support,” said Koenig. “And it’s really hard to get people invested in green space if the property is in question, so it was a big win for us to get this put into Parks and Rec.”

According to City Councilman Mark Squilla, who represents the district the lot is located in, community support is exactly what compelled him to help move Letterly Green under the control of the Parks and Recreation Department, so it could be designated as public green space.

“My motivation was that normally with any type of outdoor space we want to have stewardship – people who would be willing to help maintain it, take care of it, call if there are problems,” said Squilla. “[EKNA] was able to get a Friends group together to be the stewards of this open space. And once they did that, that was a big incentive for me.” 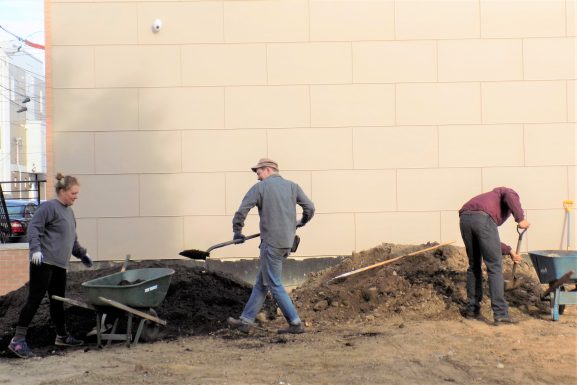 According to Squilla, EKNA members mapped out their neighborhood and marked twelve open green spaces for preservation, one of which was Letterly Green. From there, they and the councilman’s office worked quickly to put the properties on hold so they would not be listed as up for bidding or sale by the city. Once EKNA was prepared with an organized effort to develop and maintain the green spaces, the groups worked with several city departments, including the Philadelphia Redevelopment Authority. The decision to reach out to the Parks and Recreation Department was intentional, based on what was envisioned for the Letterly Green space.

“Parks and Rec is not always willing to accept things depending on what you want to put [on the property],” said Squilla. “There’s another avenue [when] people have gardens and open space. Sometimes we go through Neighborhoods Gardens Trust and transfer it to them, but if it’s going to be more of a recreational use, then we try to go to Parks and Rec. So what they ended up really wanting to do with that parcel drove where we as a city would want to have ownership.”

As for the next steps in the process, EKNA is working with the hope that Letterly Green can officially open next spring. 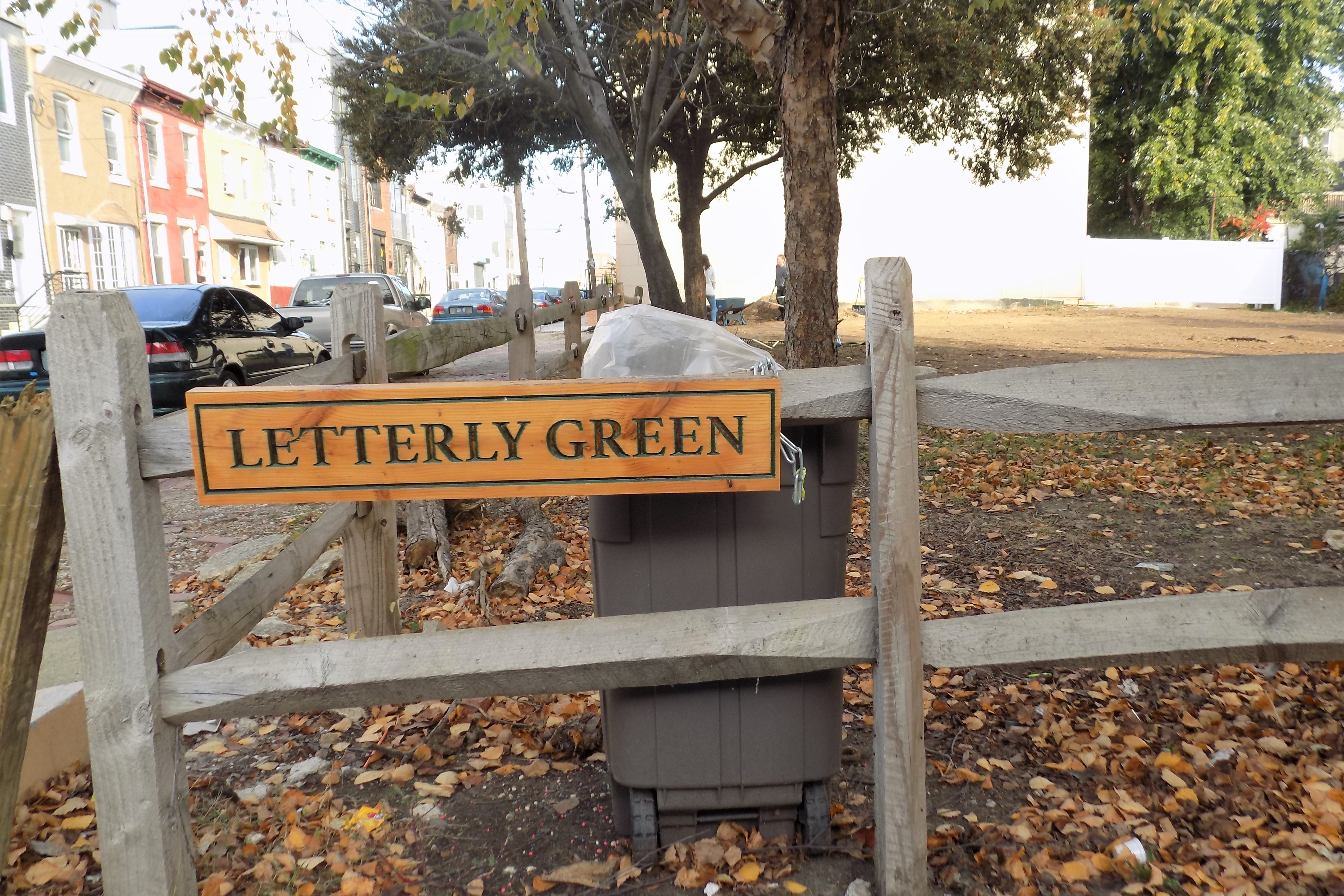 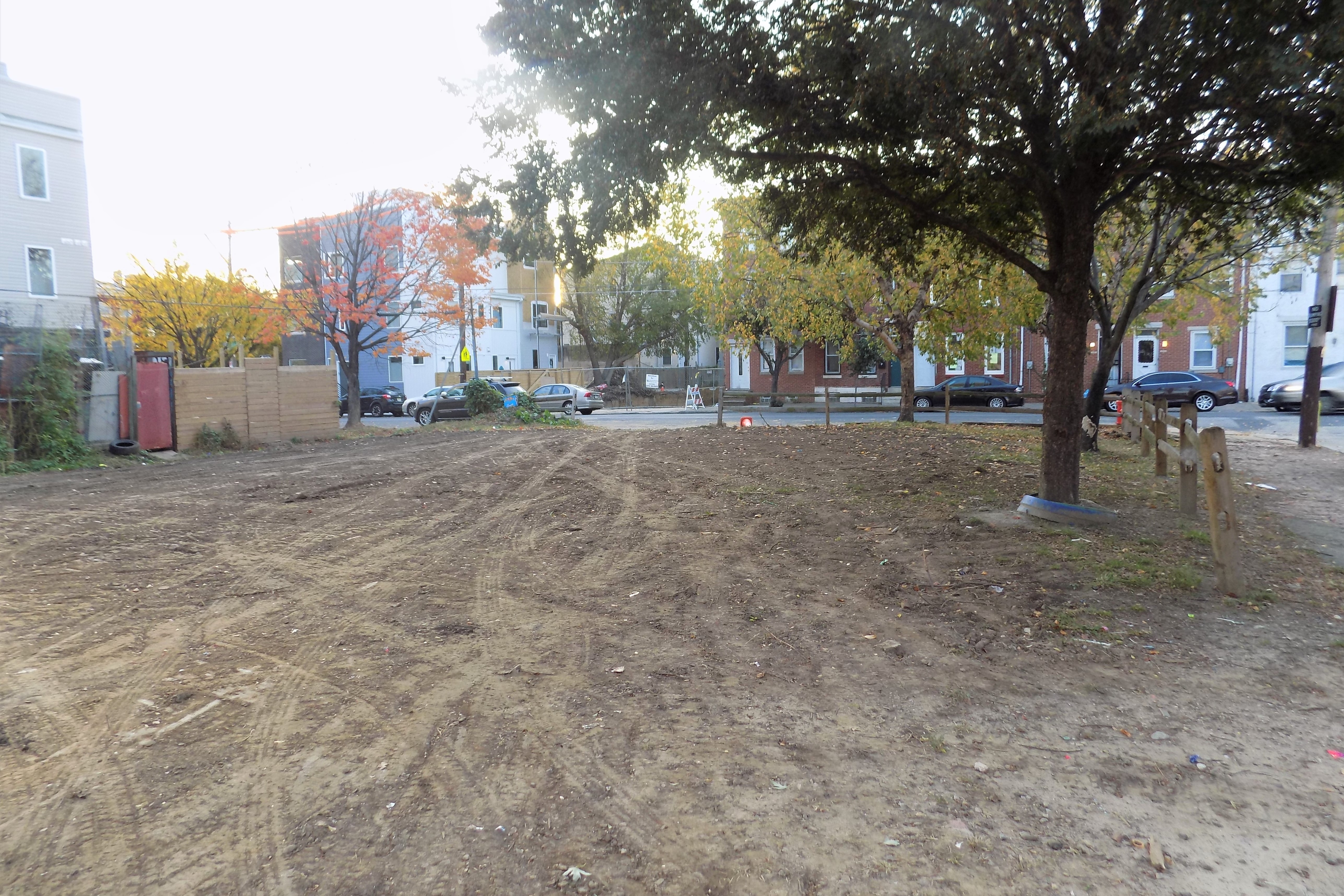 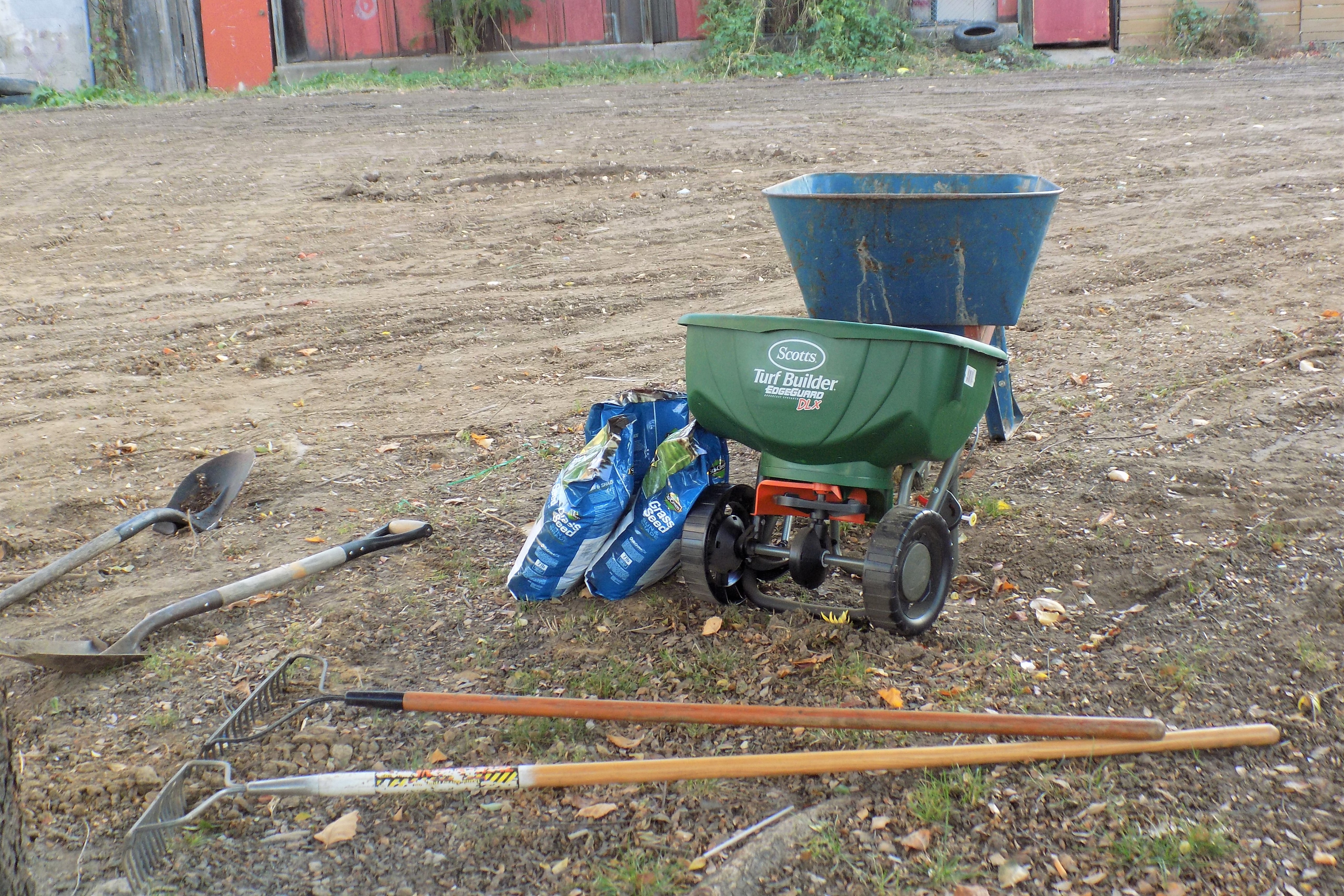 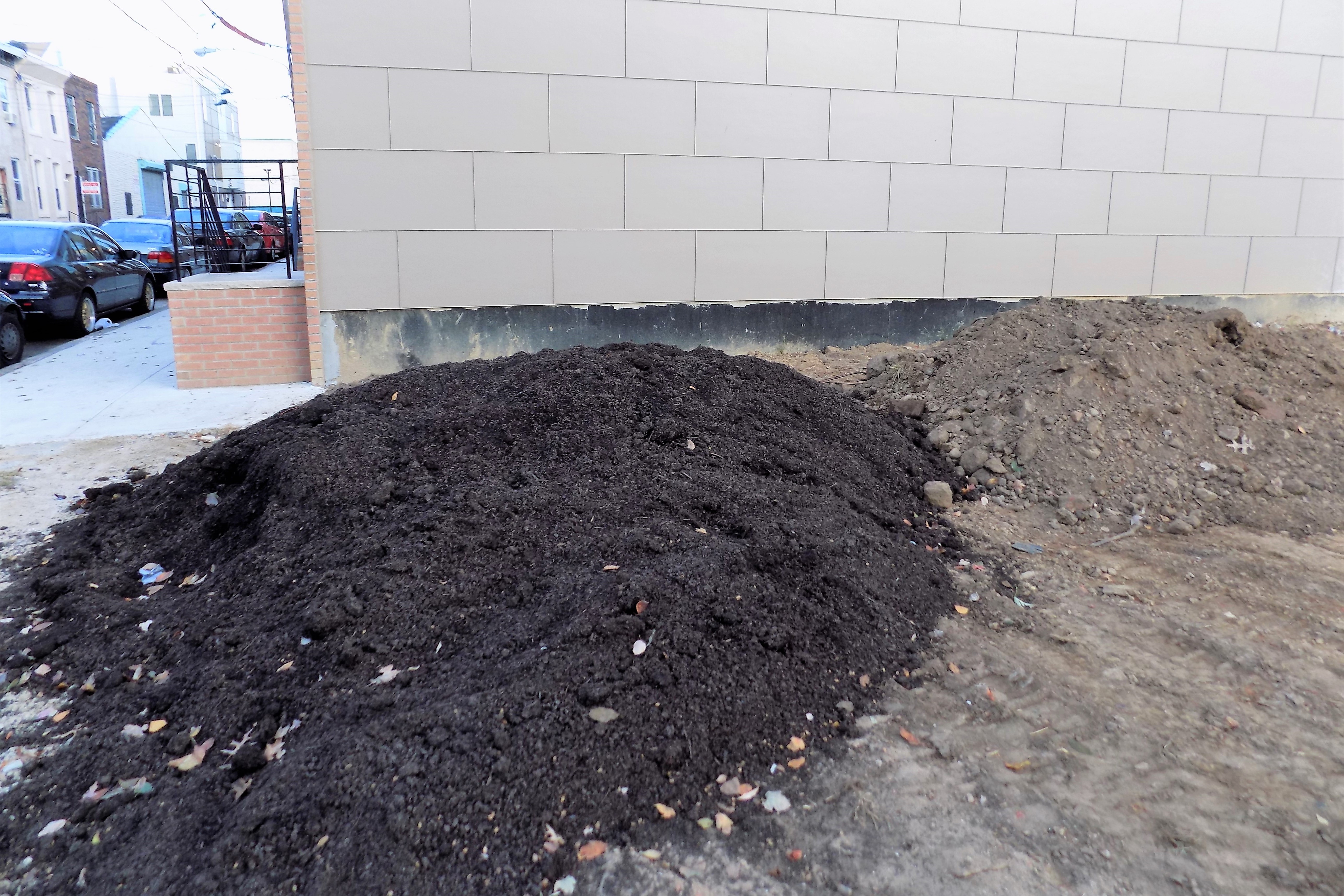 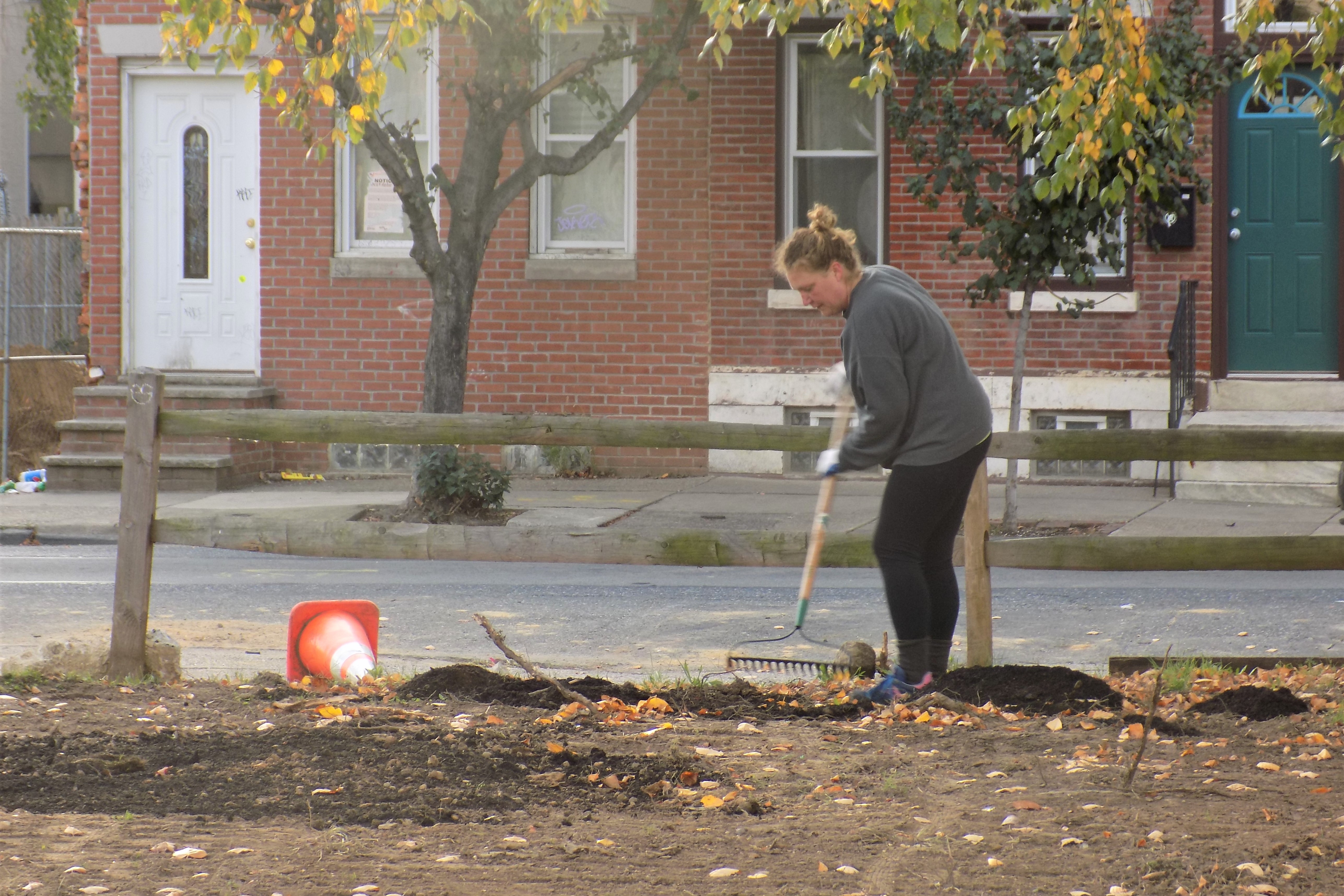 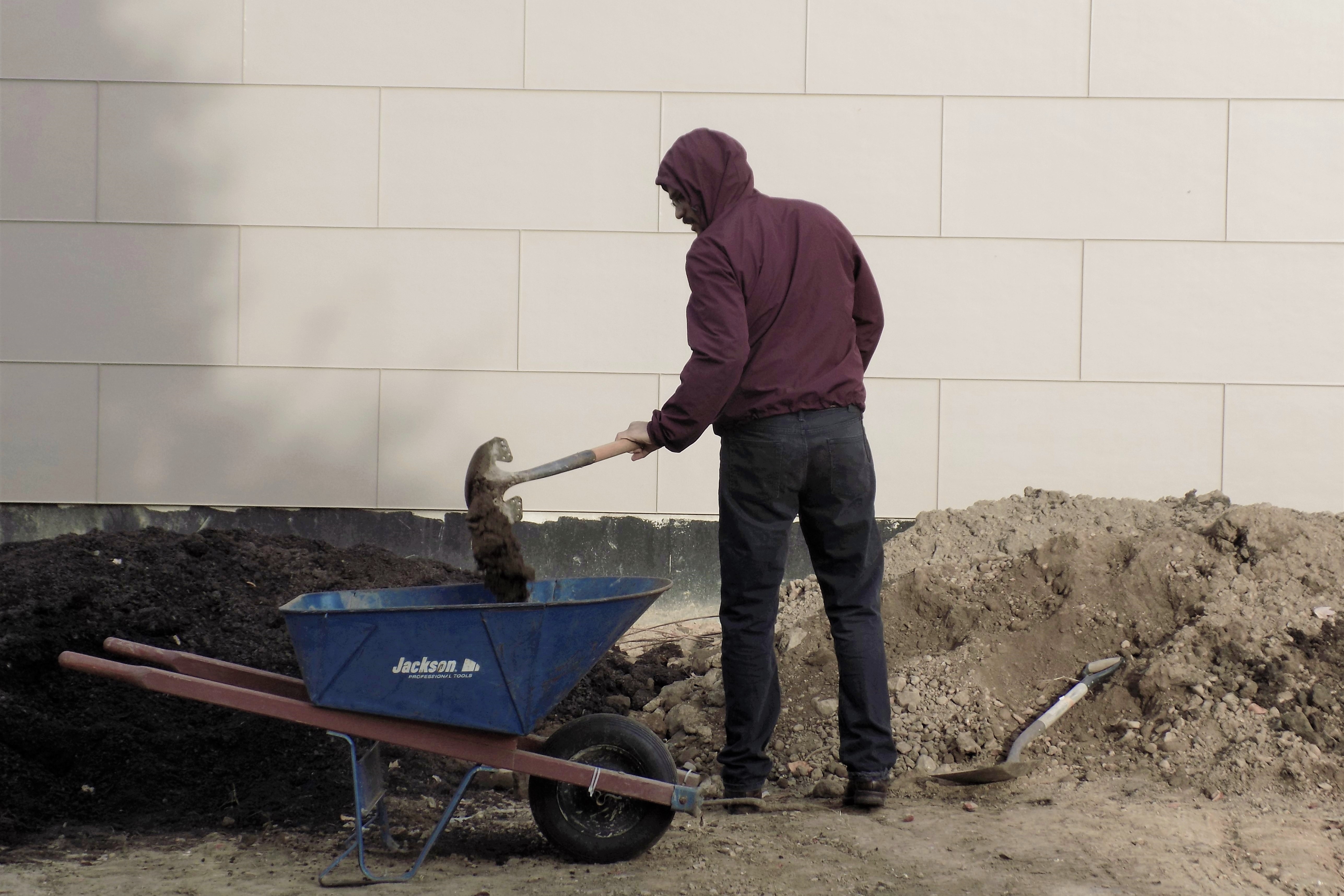 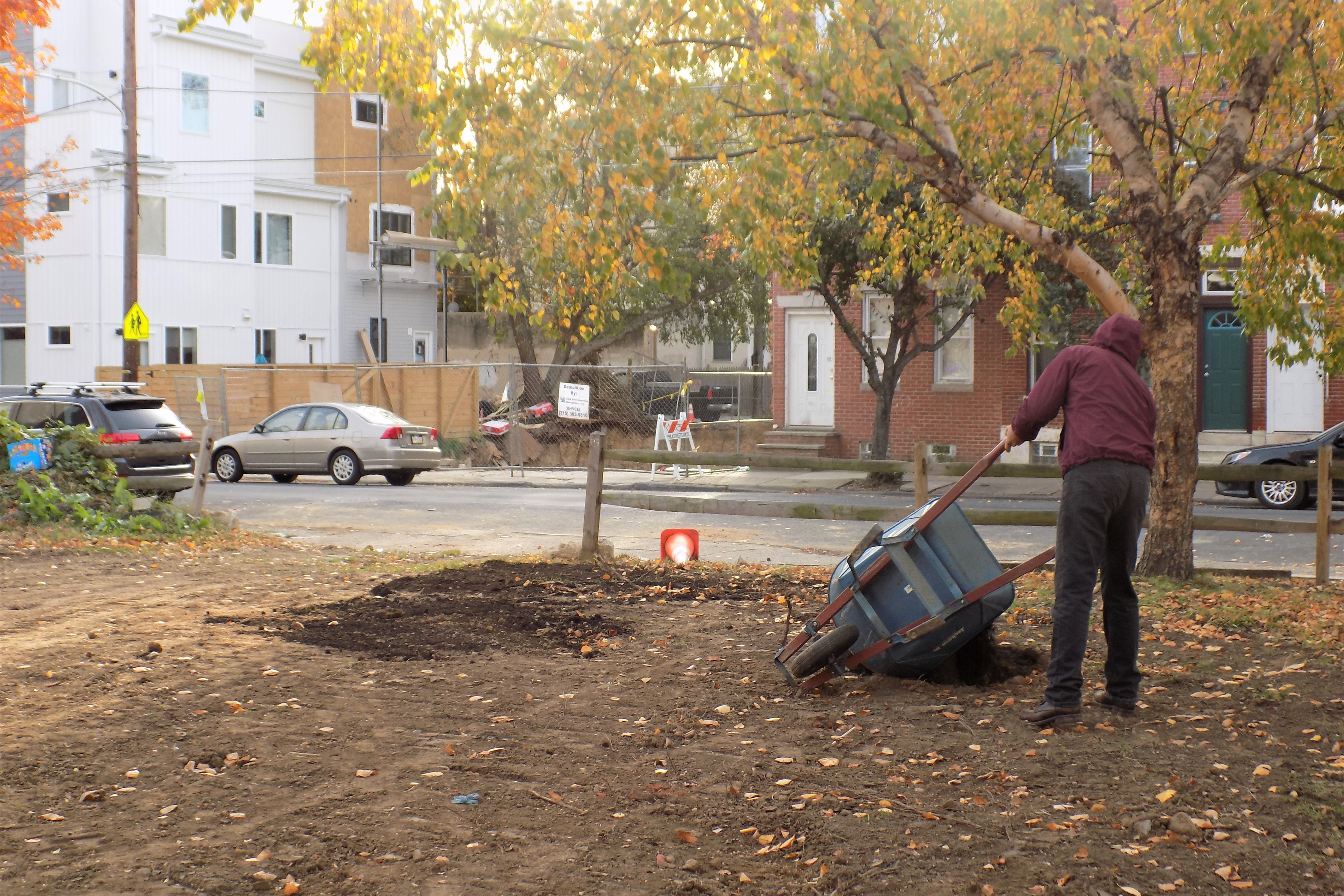 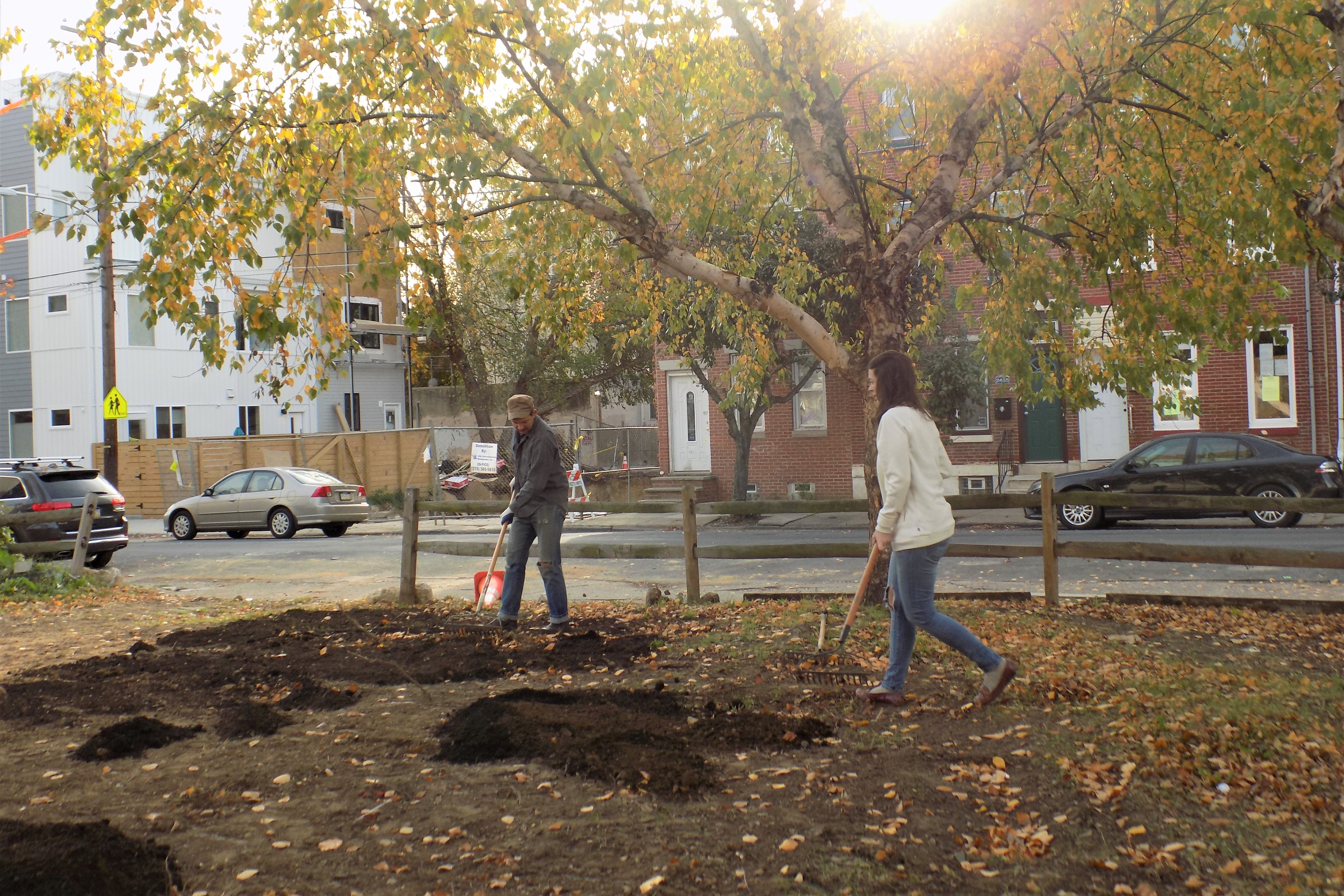 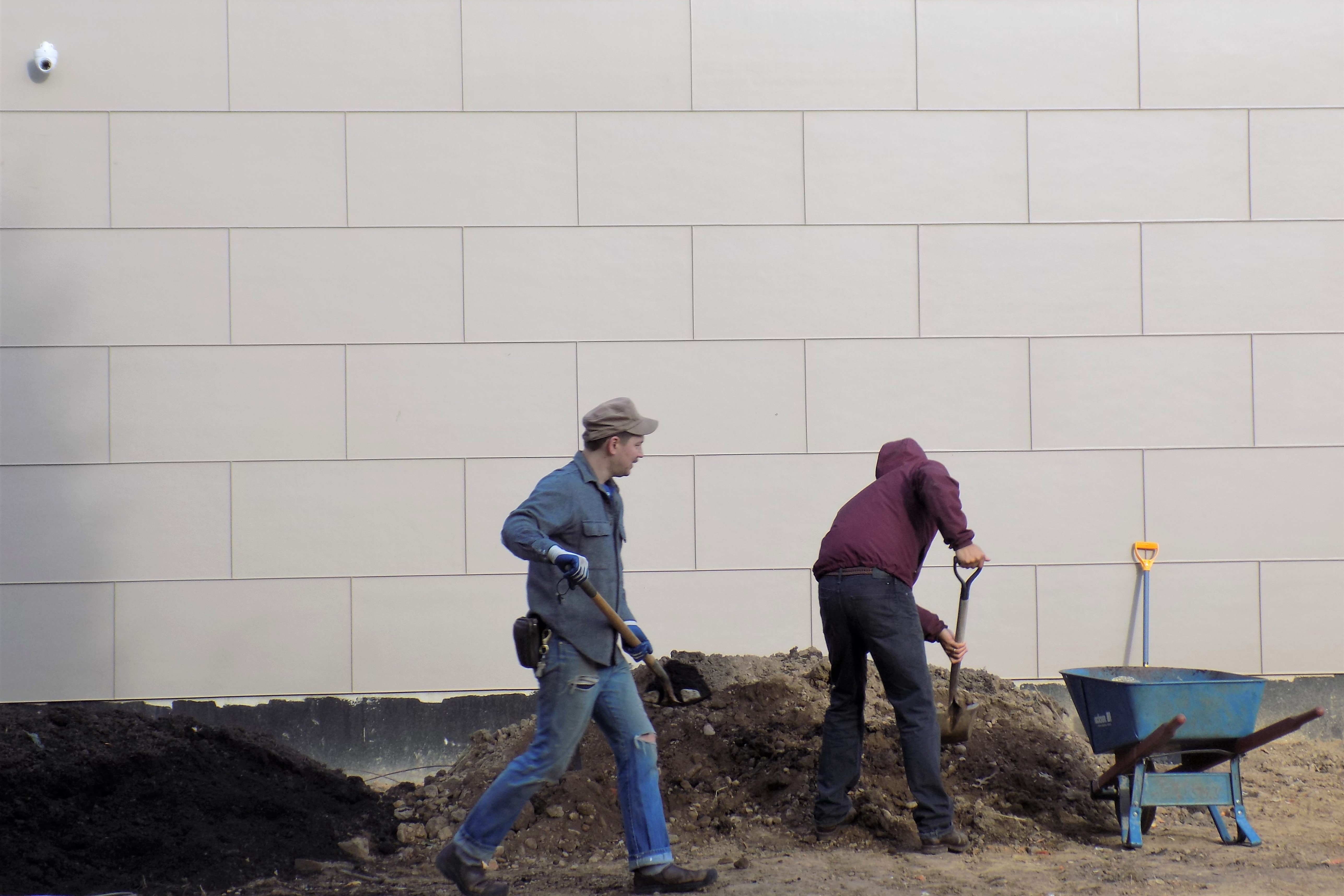 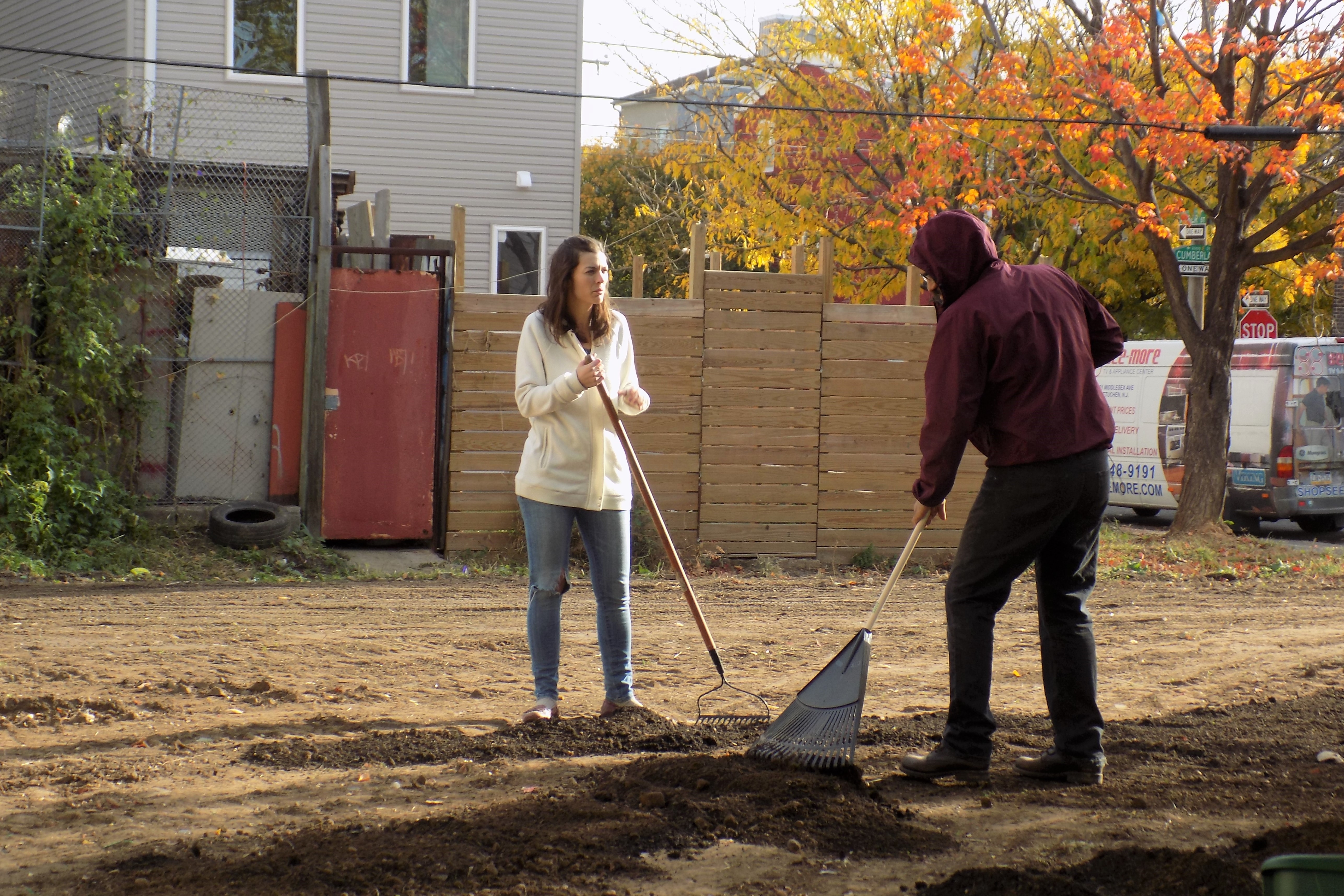 “There’s a few groups that are already working with EKNA to do programming, so we are planning on [having events there],” said Koenig. “Right now we’re focused on our short-term goals like the fundraising. And we want to give the grass seed an opportunity to get rooted, so we’re hoping people will respect the green space and stay off of it this winter. Most of the work should be done by spring.”

Squilla credits EKNA and the neighborhood for using the impact of community to make the idea of transforming Letterly Green a reality.

“If we don’t have the community pushing these issues, these things never happen,” said Squilla. “People like EKNA have the ability and the foresight to come up with an idea to keep some open space in their community before it started getting [developed], and I think that was the key to making Letterly Green work.”

— Text and images by Austin Albright and Morgan O’Donnell.

https://vimeo.com/39650069] Isaac A. Sheppard School located at 120 W. Cambria St., had been on the radar of the School Reform Commission for years. With a building constructed in 1897 and an enrollment of less than […]

Even in the increasingly solitary digital age, people still often feel the need for community in their lives. In Philadelphia and cities across the country, green spaces of all shapes and sizes can fulfill that […]

Many neighborhoods in Philadelphia are considered underprivileged “food deserts,” low-income areas that lack regular access to grocery stores and fresh markets. They battle with consequences such as early childhood obesity and an overall decline in […]