Even in the increasingly solitary digital age, people still often feel the need for community in their lives. In Philadelphia and cities across the country, green spaces of all shapes and sizes can fulfill that need.

“People like a place to congregate,” said City Councilman Mark Squilla, whose District 1 encompasses East Kensington. “If you look at our city years ago, a lot of neighborhoods were built around churches and parishes. And then as [the] diversity of neighborhoods started changing, we found that gardens and open spaces were places where people were really going to communicate with each other — whether it was a senior citizen sitting down to read a book under a tree, or a parent taking their young child to play on some play equipment.” 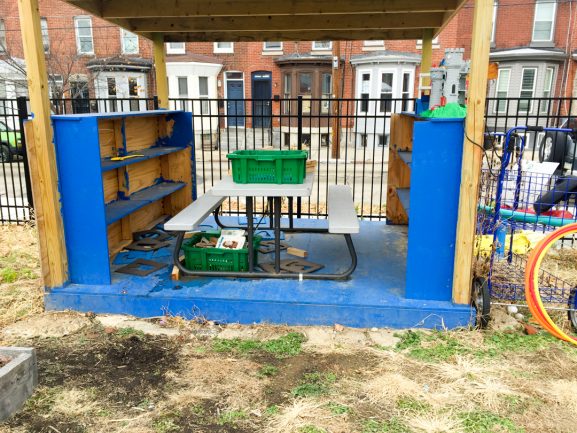 Research shows green spaces bring value to a neighborhood and a stronger sense of fellowship among residents. According to the Environmental Protection Agency, walkable neighborhoods, parks and other open recreational areas invite social interactions and stimulate the senses by bringing simple aspects of nature into urban life.

These spaces also allow neighbors to feel a sense of pride and ownership of the land that surrounds them. Community gardens in particular, where people grow and harvest fresh crops to provide food for the neighborhood, represent a unified effort by neighbors to sustain themselves and to respond to issues that impact them, such as poverty and related problems. A 2009 study from the University of Pennsylvania’s Urban Studies department looked at community gardening economies in Philadelphia. It found that in low-wealth communities gardening is an effective means of coping with poverty because although it is labor intensive, it does not require a large amount of capital or resources and the outcome is nourishment for the neighborhood. The authors of the report conclude gardening is an important part of building healthy, resilient cities and communities.

The study also estimates that in the summer of 2008 alone, Philadelphia’s community and “squatter” (single-owner) gardens produced more than two million pounds of seasonal vegetables, worth a total of $4.9 million. This occurred despite the number of city gardens declining by more than half from 501 in 1996 to 226 in 2008. The authors argue that gardeners who grow food to give to their hungry neighbors are entrepreneurs in their communities’ food security economies.

In addition to the role that gardens play in feeding the hungry, green spaces in general bring a variety of public health benefits to urban environments. A 2014 article from the Landscape and Urban Planning Journal reported that since parks often serve as sites of physical activity, they are associated with better health and a lower risk of mortality and chronic disease. Children in urban areas who have more access to parks and recreation are less likely to develop obesity, and interacting with nature can reduce symptoms of behavioral or psychological problems. Green spaces are also greatly beneficial for mental health and reducing stress, as well as providing a feeling of safety and belonging for those who regularly visit them.

One organization advocating to secure more green spaces for the East Kensington neighborhood is Arcadia Commons, a nonprofit founded in the summer of 2013. The group’s mission is to create public spaces for the community to “experience the physical, emotional, and intellectual enrichment provided by green space.” It aims to obtain and transform parcels of land into areas to host community gardening, farmers markets, educational workshops on green growing and gatherings for neighbors in East Kensington.

According to Jeff Carpenter, co-founder and president of the Arcadia Commons board of directors, outside help and hard work was essential in order to start the organization and get its main park at Kern Street up and running.

“[Arcadia Commons] really got going about four years ago when we threw a barbecue here when [Kern Park] was still derelict,” said Carpenter. “We had the good fortune [to get] Mark Squilla to stop by on a random Saturday afternoon. He started talking to us about our plan and got really excited and said, ‘Yeah, we can pledge this city lot to you and we can help with this and that.’ And so that got things really going.”

In addition, Carpenter said the East Kensington Neighbors Association board of directors had written a detailed green spaces plan for the neighborhood. The authors of that plan, Jeff Carpineta and Amy Miller, who also served on Arcadia Commons board, went to Squilla and asked he pledge to have five different city-owned lots in Kensington saved from development. Since then, Arcadia Commons has been working to preserve even more open green spaces. At the same time, it is also constantly looking for improvements to be made to its main park.

“In the meantime here, we’ve had some trouble with the soil,” said Carpenter. “We raised enough money to [raise the flower beds], and lot of it was volunteer [work]. We dug up the beds with our own pickaxes. It was really hard work. And along this wall [of a house next door] we wanted to dig a trench along the building.” 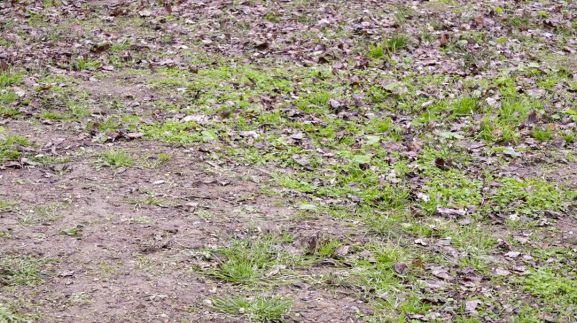 While established organizations like EKNA and Arcadia Commons use their resources to expand access to green areas, the same can be done on a smaller scale level. Julius Rivera, a well-known volunteer among the Kensington community, has helped maintain several playgrounds and garden spaces across the neighborhood for more than a decade.

“My role with spaces in the neighborhood is trying to keep them accessible to children and families,” Rivera said, “making sure they’re engaging enough [for] children interested in using them, but also making sure they’re sturdy enough that they don’t get damaged.”

The primary green space Rivera tends to is Collins Smith Barrick Play Garden (pictured throughout this story), located across from his house on Hagert Street. The garden also has the support of a Friends group that is almost 150 members strong on Facebook.

“When my children were young we didn’t have a bunch of green spaces in the neighborhood that were safe and clean for them to play in,” he said. “After the city came through and [cleaned] out the vacant lot, I decided to maintain it and it became a green space. That was about 15 years ago, and since then I [have gotten] a bunch of neighbors to help take care of the space and a lot more people are invested.”

In the spirit of accessibility, Rivera originally intended to keep the play garden completely open, but due to neighbors and visitors dumping garbage into the empty space he put a gate around it. The gate has remained unlocked, so far without any major issues, even as equipment has started to collect there.

“Because of being consistent in keeping it clean for years and getting other partners to invest in the space, we have a shed, a couple of gazebos [and a] 10-by-10 sandbox,” said Rivera. “All [of] these things helped to make it like a claimed space, a used space. One thing I continue to be concerned with and try to monitor is graffiti, which we haven’t a problem with but could become a problem in the future.” 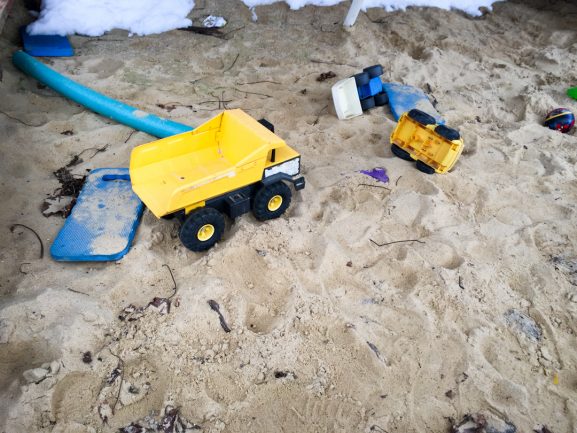 According to Rivera, getting neighbors to rally around the common cause of improving the quality of life through green space has been a challenge, especially due to factors such as low income and a generational divide in opinion.

“The older folks in the neighborhood feel that the new folks are coming in and demanding [that] things be changed to fit their needs and their preferences,” he said. “Whereas a lot of newer folks move into the neighborhood and wonder how [they] can live the way that they’re living. So we’ve had to be a part of those conversations and be mindful of the way that we design our events and the language that we use. One of the things we’ve made sure to do is to make all of our events have free food. This has helped some of the older residents who might be on fixed income be able to participate. But I feel like we’re in a good place in regard to having both old and new [neighbors] being supportive of very specific things. We may not have them agree on everything, but to some degree [they agree] that these are special places that should be preserved.”

Similarly to Carpenter and Arcadia Commons, Rivera cites Squilla as a significant ally in helping him and fellow volunteers accomplish their goals in the quest for more green space in Kensington.

“I began interacting with [Squilla] when we were working on the [Hagert Street] playground and getting that developed and reconstructed,” Rivera said. “He would come out and see what we were doing, and saw that we were serious about trying to bring a sense of community to the neighborhood. Once we started having conversations about the garden, it was a no-brainer.”

Squilla said investing in green spaces is vital to sustain a deeper sense of community in every neighborhood.

“We believe [green spaces] are big driving points in keeping neighborhoods together,” he said. “We [need to] make sure we support these places that not only enable us to build a community, but to sustain that community by having a lot of places to go where people can congregate and work together.”

Rivera is expecting to receive news in the near future that Collins Smith Barrick Play Garden will be transferred under the control of the Neighborhood Gardens Trust, which acquires recreational green space and currently preserves more than 30 gardens and shared open spaces around Philadelphia. Working with NGT will provide an opportunity for the play garden to be insured and for Rivera and neighbors to access additional resources for it.

“Part of Councilman Squilla’s support was based on the understanding that we would pursue [working with] the NGT because he is confident in their ability to lead and be aware of the things that are necessary to maintain a garden space in the city,” said Rivera.

“Whether it’s an open space, a playground, or even a garden, they all have their certain aspects that make things work,” said Squilla. “I always give credit to the community because they’re the ones [who] are the driving force behind it.” 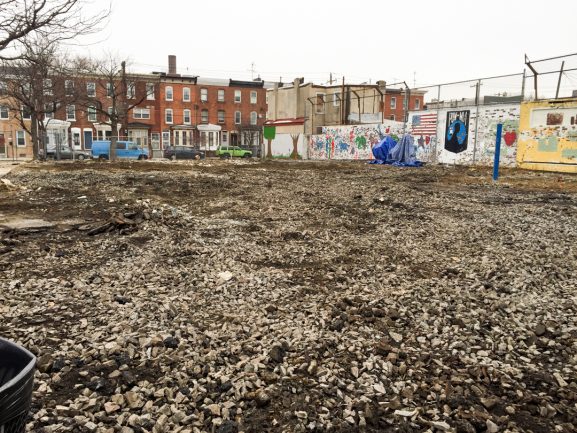 Rivera is motivated by his own experiences seeing how green spaces, large or small, have a positive impact and bring the community closer together to enjoy the fruits of their labor.

“[There was a] blackberry bramble that was a hedge in front of the [play garden] for a long time,” he said. “Many people, children and adults alike, in the neighborhood used to go there during the summertime to pick blackberries. Then in the garden itself there were tomato plants that the children used to just pick and eat from. That kind of access to green in this neighborhood is at the heart of the space. We should live with green, be familiar with green and learn how to take care of green things.”

– Text, images and video by Austin Albright and Morgan O’Donnell.

Roofless and deconstructed, a grey building on the 1900 block of E. Letterly St. is nothing more than a pile of bricks, metal frames and shattered material. What is shown on Google Maps of 1921 [continue reading…]

Friends of the Wissahickon recently hosted a lecture on the expanding rooftop agriculture industry at the Valley Green Inn. The speaker, Philadelphia landscape architect Lauren Mandel, went through a detailed presentation and open discussion about [continue reading…]