The bid to land Amazon’s second headquarters has been made, and local tech industry experts believe even if the Seattle-based corporate giant goes elsewhere, it’s been a good experience for city leaders.

“They should use the energy they have brought in, to ride long and go after a few companies — the primary goal is job creation so that we can create a more healthy society,” said Charles Dhanaraj, the H.F. “Gerry” Lenfest professor of Strategic Management at Temple’s Fox School of Business.

Earlier in 2017, Jeff Bezos, Amazon CEO and founder, called for cities to submit proposals and provide information about possible sites, tax incentives, transportation and the education level of the talent pool. Amazon announced it had received 238 proposals from across North America, including sites in Camden, New Jersey, and Harrisburg.

“Amazon is a no-nonsense company,” Dhanaraj said. “More than tax break, they will be looking for who can clear the sites quickly, where they can get it up and running quickly, etc.”

Amazon said its new headquarters will add approximately 50,000 jobs and will invest more than $5 billion in construction. The headquarters will also provide the potential for thousands more jobs in the future, and more direct investment to the chosen city.

“I think a lot of amazing work went into figuring out what this city has to offer a big company like Amazon,” said Morgan Berman, CEO of Milk Crate, a tech startup in Philadelphia. “We have access to amazing talent through our local universities, we have the greatest per capita rating of higher education institutions in the world, the cost of living is quite low compared to other cities in the area, the quality of life here is phenomenal, and the arts and culture. So for those reasons and others, it’s been a great place to grow our business.”

In Seattle, Amazon reports that its has invested $3.7 billion in buildings and infrastructure, employed more than 40,000 people (who have been compensated more than $25 billion), and paid $43 million to the public transportation system. The company also said it is responsible for more than 200,000 hotel night stays annually for offsite Amazon employees and visitors. Overall, the company reported an additional $38 billion has been invested in Seattle’s economy as a result of Amazon’s direct investments.

The Bureau of Labor Statistics reported that about 700,000 Philadelphians were employed as of September 2017. This means that Amazon’s proposed 50,000 new jobs would make up around 7 percent of the total workforce in the city.

In Amazon’s proposal instructions, specific factors are outlined: a site with proximity to the population center, an international airport, major highways and access to mass transit. Initially, Amazon wants a site of more than 500,000 square feet, but said that beyond 2027  it could potentially require upward of 8 million square feet.

Philadelphia chose three primary sites to pitch to Amazon, although if the company were to choose this city it could potentially start construction of its new headquarters anywhere.

In University City, Philadelphia suggested the Schuylkill Yards (above) and uCity Square (below) development zones. 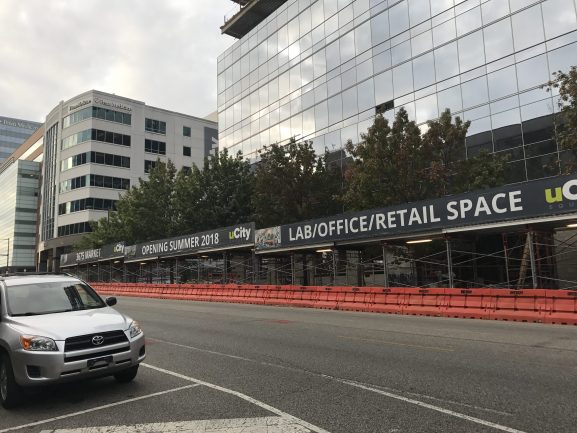 Schuylkill Yards is right outside 30th Street Station with access to all forms of transportation in the city. Its combined area is just under 7 million square feet, well above the 500,000 that Amazon is looking for. It is also within the Keystone Opportunity Zone, a Pennsylvania initiative to give tax breaks to areas with the potential for industrial and economic growth. 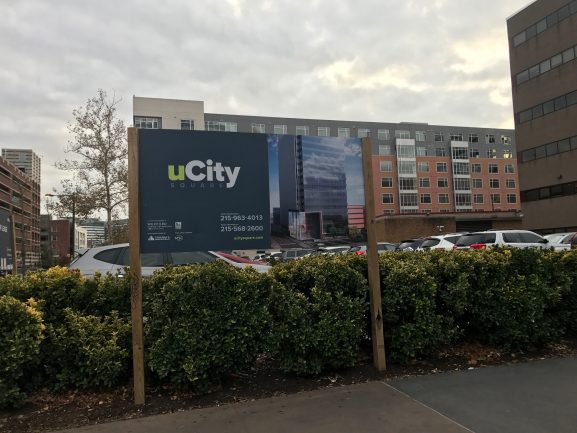 Meanwhile, uCity Square stretches from approximately 34th to 38th streets, on both sides of Market Street. It has access to the 34th street and 40th street stops along the Market-Frankford Line; uCity is also within the Keystone Opportunity Zone.

The third proposed location is the Naval Yard in South Philadelphia. The massive development area has more than 17 million square feet of property. It currently has 12,000 employees working at 152 different companies, and is also within the Keystone Opportunity Zone. Keystone organizers said companies save approximately $10 to $20 in taxes per square foot.

In addition to tax incentives, Amazon is looking for a generous “talent pool” — an educated workforce that the company hopes to recruit.

“I don’t think [the talent pool in Philadelphia] is much of a roadblock for them,” said Jake Stein, CEO and co-founder of Stitch Data. “Based on what I know about the situation, I suspect it is more about tax incentives, structural things, and proximity to an airport and mass transit; things that are just intrinsic to the city that are hard to change outside of a 20-year timeline.”

“The probability of Amazon coming to Philly is about one in 10,”  Dhanaraj said. “But, if the city can take advantage of what they have pulled together to actively go after new and high growth companies, this will yield a substantive dividend.

Northern Liberties: Philadelphia Freelancers Have a Home at Devnuts

Devnuts, located in a 3,000-square-foot collaborative workspace in Northern Liberties, is an organization started in the spring of 2007 by former Drexel students Chris Alfano and John Fazio. Briefly, Devnuts welcomes freelance web developers and [continue reading…]