Esposito’s Meats has used its family-first and community-based business model to become the cornerstone butcher shop in South Philadelphia for its 106 years in existence.

After success and local backing, the Espositos moved into their current location at 1001 S. Ninth St., with intentions to expand. More success followed, and just a few short years into the next decade, Esposito’s operated its own slaughterhouse.

Attilio Esposito and his son Louis traveled across the country buying cattle for their butcher shop. They initially only sold beef, but in the 1960s, their reputation led them to expand their meats to also include poultry, pork and lamb.

In addition to the family’s legacy of success, many of their employees have also succeeded through several generations. 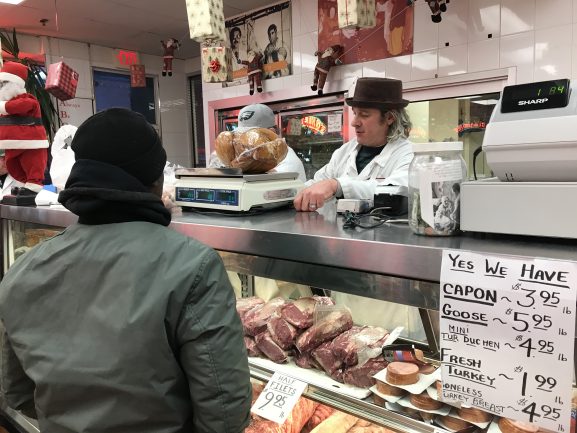 Charles Roundtree has been working at Esposito’s for more than 38 years. Throughout his career, he started as a meat cutter and progressed to being the primary veal cutter in the shop.

Roundtree said the first sign of significant expansion he observed within the company happened in 1989, after it began selling its products to hotel eateries and high-end restaurants.

“Before we started going to Atlantic City, we were still somewhat small in overall volume,” Roundtree said. “It was when we started working with the Atlantic City vendors that we got big. We sell more than 4,500 pounds of veal per week, and we still cut them by hand, with a knife.”

That path has come full circle in the shop’s fourth generation, as brothers and co-owners Lee and Louis Jr. are now able to let the quality of the shop’s product speak for itself.

But perhaps more fittingly during the holiday season, it is more than just the ownership and staff who are confident in the quality of their products.

Vince Brock has been a longtime customer at Esposito’s and said the staff’s expertise with his orders are what keeps him coming back time after time from his Fishtown residence.

“The fact that they consistently point me in the right direction of what to get, it truly has brought my business back every single time,” Brock said. “Their knowledge chooses for me, which I have always appreciated.”

Jeremiah Johnson has worked at Esposito’s for more than three years and enjoys splitting his time between cutting down the meats and serving the customers. While he is enthusiastic about the quality of the meats and is satisfied with the customer service, he fears that machine based technology will impair what makes Esposito’s unique.

“I really feel that the meat industry will become even more machine based in the very near future,” Johnson said. “That is a little bit of a bummer, as one of the things that is so special about Esposito’s is that most of our stuff is still hand cut.” 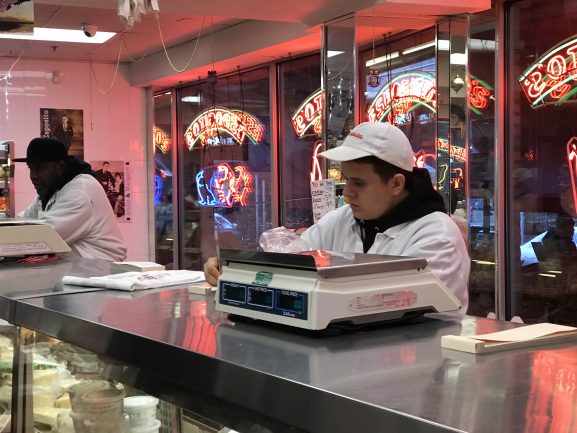 Despite the quality of the food and customer service supplied by the staff at Esposito’s, the American public has become conscious of the health concerns of red meat, which has clearly affected the meat packing industry.

To this end, Johnson said consumers need to be mindful of the volume of meat that they are consuming.

“When people are buying whatever meats they choose, they need to be conscious,” Johnson said. “At the end of the day, none of these animals volunteered for this. If you have a big appetite, eat what you can eat. But if you don’t, please don’t waste a lot of food, it comes off as very disrespectful.”

The experience of working at Esposito’s has offered various benefits to employees.

Another longstanding employee, Jordan Morinich, has been working at the shop for more than 30 years. He has taken away a lot from his experiences at the shop, having started working at Esposito’s when he was in high school.

“Working here when I was a kid provided a lot of freedom, especially at a point in my life when I really needed it,” Morinich said. “Working here so much when I was in high school instilled my strong work ethic that has been strengthened since 1984.”

Above all, Morinich seems to enjoy a family atmosphere that has brought four South Philadelphia generations together.

“I get a kick out of when customers we’re friendly with come in and get the exact same meal for Christmas every single year 20 years in a row,” Morinich said. “We constantly get folks who come into the shop and reminisce back to when they came in with their parents or grandparents when they were kids. That’s the imprint our shop has on South Philadelphia. It’s pretty neat.”

https://vimeo.com/29979678] While South Philadelphia’s Italian Market has been considered a cultural hub since its beginning, a large influx of Mexican immigrants has been taking up the storefronts, revitalizing the marketplace and populating its surrounding neighborhoods. [continue reading…]

For five years, Trang Dang has been labeled a victim. “For me, the definition is very hazy,” she said. “But people have always identified me as a victim of violence, so I was like, ‘OK, [continue reading…]

South Philadelphia: The Expressive Hand Bridges Gap between the Hearing and Deaf