Tyrone Goldsmith used to sit at his grandmother’s window, his backpack ready, and wait for his father. He was 6 years old and had just moved from South Philadelphia to West Oak Lane with his mom.

As time went by, Goldsmith (above) realized his dad wasn’t coming.  But he had other male figures in his life including three uncles who lived nearby.

At 11, the middle-class neighborhood that had become his home was hit hard by the crack epidemic and Goldsmith lost male-role model after male-role model to addiction. His peers and members of his family started using, dealing and ending up in jail. Goldsmith can describe that time in his life with one word: hopelessness.

“I thought I wasn’t going to make it in life,” he said. “So I decided to do what everyone else [was] doing.”

Goldsmith was 19 the first time he was incarcerated, and spent more than a decade in and out of jail and struggling with addiction. He missed the birth of his first two children — their first steps and first words.

When he was released in 2009, he decided it was time to turn his life around. He went to therapy, got sober, went to college. He is now in his last semester at Chestnut Hill College getting his master’s degree and working as a drug and alcohol counselor.

He has two younger children now. He takes his son, 5, to boxing practice three days a week and his daughter to dance classes.

Therapy was a breakthrough for Goldsmith who, although undiagnosed, believes he suffers from Post-Traumatic Stress Disorder and anxiety.

“I believe, maybe, the whole black community suffers from symptoms of PTSD,” Goldsmith said. “I feel like that’s what’s going on and that’s why there is so much crime. There is a sense of hopelessness.”

It wasn’t just any therapy program that reached Goldsmith. It was Ronald Crawford and his culturally relevant approach to counseling that restored his hope.

Crawford, a therapist who grew up in North Philadelphia and has been in recovery for 27 years, uses hip-hop as a technique to reach communities of color who might not respond well to traditional therapy. His methods are part of his push for culturally relevant therapy, or therapy that looks, sounds and embodies a person’s culture. 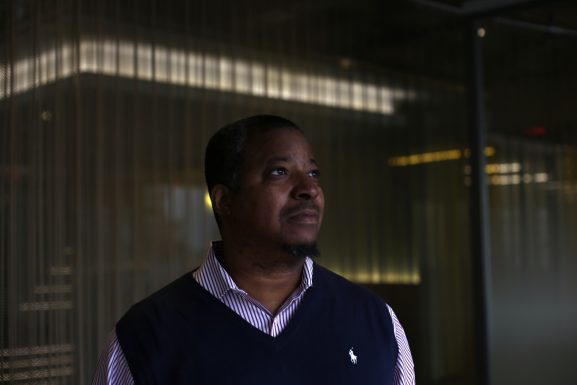 Over the course of his 17-year career, Crawford (above) has found that techniques of traditional therapy can be overwhelmingly unsuccessful for men of color – citing the stigma associated with vulnerability, a history of racism in therapy and a lack of literacy as reasons why.

But another reason men of color may be unresponsive to traditional therapy is that many mental health professionals don’t look like them and haven’t shared their experiences. According to the Bureau of Labor Statistics, 89.5 perceny of psychologists are white and 68.9 percent of them are women.

“If you’ve experienced racism at the hand of white people,” Crawford said, “how do you open up to a white therapist? People identify with me because I’ve been through a lot of the things they’ve been through.”

Crawford, like Goldsmith, grew up without a strong male role model and struggled with addiction during the crack epidemic. According to Crawford, fatherlessness is typically the first trauma that young men of color experience, a topic he plans to explore in his upcoming book “Hip-Hop Ain’t Dead, it’s Just Fatherless.”

But trauma can stem from a variety of issues and can manifest in the form of anxiety, depression or PTSD,  to name a few.

PTSD is most commonly associated with veterans, but Crawford, like Goldsmith, believes it also affects communities of color, mostly in urban neighborhoods.

“People who live in disorganized communities face trauma every day,” Crawford said. “Trauma is simply having a hard time letting go of emotional, painful experience like seeing somebody killed, being a victim of some type of violence, an accident, abuse [and] being afraid all the time. That’s trauma.”

Dr. James Jones, a psychiatrist in Philadelphia and a consultant at the Criminal Justice Center, also says that people of color experience specific trauma, but when he talks about it he says black trauma is generational, going back to slavery.

“We have to consider the historical nature of American psychiatry with African Americans,” he said. “During the period of slavery psychiatrists would look at any African descendants who wanted to seek their own treatment as pathological.”

Jones (below) works with people suffering from mental illness and people who have substance abuse disorder, many of whom are people of color. He calls both demographics “the invisible people.” Jones believes that without personal contact with someone struggling with either mental illness, substance abuse disorder, or both that people generally don’t think about these issues. 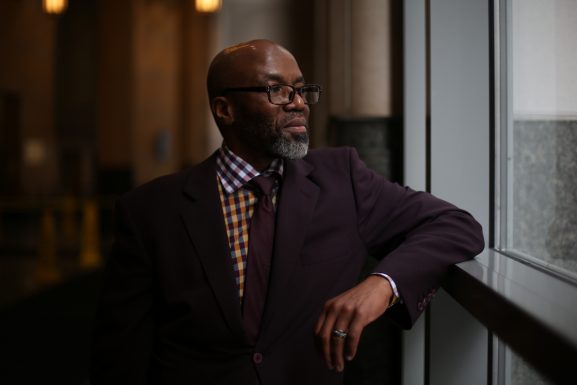 Jones and Crawford met while working at the same outpatient facility. In their spare time, they work together to spread awareness, doing community workshops and talking to the public about therapy and mental illness.

One of the places that Jones and Crawford have done their community workshops is at Enon Tabernacle Baptist Church in Philadelphia. Through that, Crawford met the Rev. Leroy Miles (below) of Enon. Now they meet for coffee to talk for hours about hip-hop, mental health and issues in the black community. Both have noticed a resentment in the community toward the way the opioid epidemic has been handled as opposed to the crack epidemic.

“In the 80s,” Miles said, “when we [African Americans] were going through our thing, it was treated completely different.”

After reading an editorial by Philly.com contributor Solomon Jones on how Philadelphia failed black communities during the crack epidemic, and Mayor Kenney’s response, Crawford hopes to talk to the mayor about ways to mend relationships with the black community and implement culturally relevant therapy.

All three men agree that the first step is getting people into therapy.

“The biggest thing is really empowering people,” Jones said, “because, in general across all cultures and backgrounds, mental illness is not really accepted in the mainstream.”

In 2011, the Brewerytown CDC and the Fairmount CDC collaborated to turn an abandoned lot into a space the two neighborhoods could put to use, creating the foundation for the community run Girard-Dream Garden. With [Read More]

South Philadelphia: PTSD and the Vietnam War, a Combination Not To Be Forgotten

“It’s the guilt thing,” said Dave McCallum. As he made his way up the familiar steps at the corner of Spruce Street and Columbus Boulevard, he placed his hand on a wall. This wall, the Philadelphia [Read More]

Immigration: For Those Who Move To Philadelphia, The Mental Health Journey Is Often Far From Over

UPROOTING Born and raised in Barranquilla, Colombia, Carolina Coronado never thought she’d leave her native country. But one day in the mid-2000s she received a phone call from a Colombian guerrilla group — part of [Read More]