A tall, plexiglass wall barricades customers from a metropolis of beer, snacks and lottery tickets at Bu Bu Deli.

The same wall functions as a locked door to owner Steve Taing’s home and family upstairs. He lives there with his 18 and 22-year old sons and wife, Lisa. Taing and his parents moved to Philadelphia from Cambodia in 1981 and then entered the takeout restaurant business.

Now, his livelihood and safety is being threatened by new legislation aimed at battling illegal activity allegedly occurring at some beer delis.

Councilperson Cindy Bass argues that plexiglass walls in beer delis make people feel like criminals in their own neighborhoods. She sponsored the Restaurant Licensing Bill, which was passed in December and requires all businesses that sell alcohol to obtain a large establishment license provided by the City of Philadelphia’s Licensing and Inspection board. Removing the glass will be put into effect by January 2021.

According to Bass, some delis have been skirting the laws, serving single shots of liquor and drinks to take on the street while obtaining a large establishment license, like a bar. Because liquor licenses are controlled by the state, she said many stores have been under-monitored and the laws go unenforced.

However, taking down bullet proof glass could be game-changing for beer deli owners who are already doing all they can to keep up with policy, like Taing. Many owners wonder if removing the glass is really necessary when re-vamping this business model.

Taing said he supported Bass during her initial City Council campaign, hoping she would not attack his beer deli like other council people, especially Donna Reed Miller, had in the past. 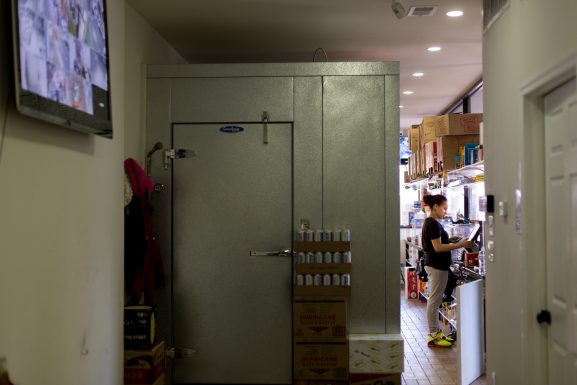 Bass believes it is abhorrent to be served through plexiglass, which will be removed because of the new bill. She put together an action team who briefly stopped into beer delis in her eighth district and recorded observations about the delis.

Taing has faced and shown resilience to rules that have affected his corner stores thus far, but he won’t stand for the latest mandate. Removing the clear plexiglass wall that protects his workers and family from crime in the deli could force him into danger and out of business.

His shop on 22nd Street near Allegheny Avenue is open 16 hours per day, from 10 a.m. to 2 a.m. He employs two local community members as well as his wife, children and family members who stop by. He owns another deli a few blocks away.

Kassy Astacio, Taing’s 23-year-old employee, works early into the morning. A small hole in the glass allows Astacio to communicate with people on the other side. Despite the barrier, she created a warm and friendly environment on a recent day, wishing people a “happy birthday” or a “good weekend.” Astacio, who grew up around beer delis herself, does not drink and relies on the glass for protection.

Without it, she might need to look for a new job so she can protect herself for her one-year-old daughter. She has been threatened while working at Bu Bu Deli.

“This is giving me safety, basically, so I don’t get hit or smacked or maced or something because they’re drunk,” Astacio said.

Astacio’s daughter sat with her mom in the store one Friday afternoon until her sitter came to pick her up.

At one point, a customer argued with Taing, claiming Astacio did not give him the correct change despite the camera’s surveillance. The rest of the customers in the deli hushed but Astacio took no break from serving a line of grateful, regular customers. 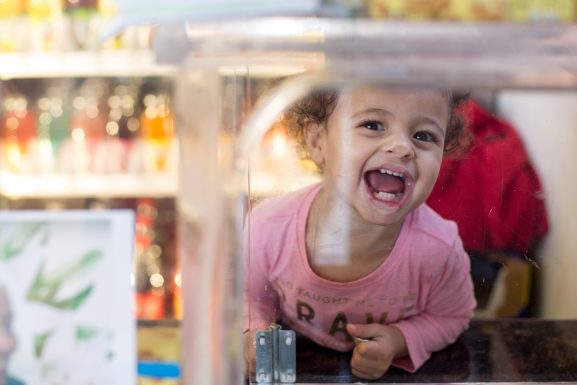 Tammy Exner, director at the Thankful Learning Center, a daycare across the street, frequents the store to buy snacks and candy. She waved to Taing through the glass.

“There used to be a lot more trash outside when this was a bar,” Exner said. “Like glass bottles thrown on the ground. None of that has happened since this has been here.”

Exner, who worked in the neighborhood before Bu Bu Deli was established, said the corner store has been a positive change. However, she understands why it could be problematic to have alcohol across the street from a daycare center. Many beer delis in North Philadelphia distribute beer, lottery tickets, tobacco products, candy and over-the-counter medicine to their customers.

Beer delis can be found on many corners near Bu Bu in Allegheny West, a neighborhood with 48 crimes on the block between both of Taing’s delis in the past six months according to the Philadelphia Police Department. Thus, Taing, the Asian American Licensed Beverage Association  and many in the community are left with questions about whether the crime rate in a neighborhood is the business owners’ responsibility and if their safety should be jeopardized in hopes that the crime rates will decline.

The Foodery, a craft beer bottle shop located in Northern Liberties is one place in the city that is set for Philly Beer Week. The celebration lasts 10 days, starting last Friday and running to [continue reading…]

Joseph Corrigan started working on election campaigns when he was 13 and has yet to stop 12 years later. He has worked primarily in Montgomery County but also in Delaware County and was a manager [continue reading…]

At 6 feet 5 inches, Tyrell Biggs presents an intimidating physical presence. However, due to his quiet demeanor, it is easy to overlook him. Biggs, 51, is soft-spoken. On most weekdays, he can be found [continue reading…]