John Medica has been a recreation leader and facility supervisor at the East Passyunk Community Center for four years, since they first opened as a city-run community center. During his time here, he has seen the positive change, particularly for children, that the center has provided in terms of having a safe space to play and be active. The community center is currently running it’s summer camp program which Medica says is a dual educational and recreation outlet for local kids when school is no longer in session.

What is your job at the East Passyunk Community Center?

My role here is to oversee all of the programming, special events and the staff here at the community center.

Why did you start here/get involved?

I was a graduate of the Temple University School of Sport, Tourism and Hospitality Management and I tested in with the city. I’ve been with the city for about seven years. Its been great to have started something from the beginning and go through the whole process of making it what it will ultimately become.

How would you describe the community? 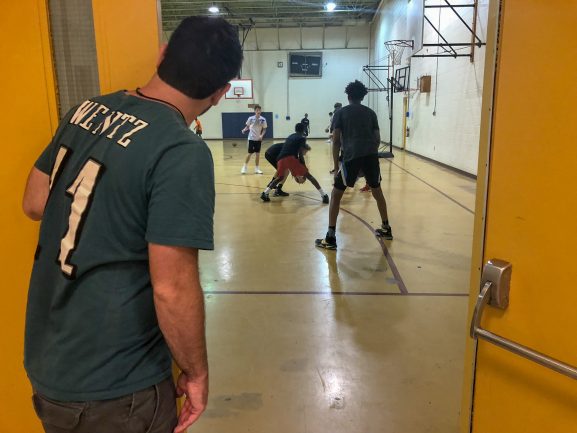 What is your relationship with the community?

I have a really good relationship with the community. The East Passyunk neighborhood and the Passyunk Square neighborhood has really changed in the last ten years and with that you have kind of a mix of people that come in here [to the Community Center]. Whenever you mix people from different backgrounds it’s not always the easiest transition. Some people are resentful for the ways things used to be or the newer people think things should be different and they don’t understand certain practices that exist. and I’m kind of a mix of both. I was born and raised in this general area, but I’m also college educated and made a choice when we were buying our house to stay in the neighborhood. I have a good relationship with the older people who have been here forever and I can see there point of view. And I also have a relationship with the newer people who have little children because I do too and I can understand what their needs are.

How did the community center come to be?

The community center was privately ran until 2015 and at that time the city took it over. At that point, I was the first supervisor here, so I’ve been here since it’s become a city facility. I’ve been apart of all the undertakings: all the events, all the programs and all the things that we do. And we have a plethora of things that we do here at the center. We’re really lucky because we have a really good community council that does a lot of fundraising and they do a lot of the in-between stuff with politicians and really advocate for the center to get what we need.

What does the community center do?

So, we have an after school program for nine months and for the other months we have a summer program. We have a preschool program that is very parent-engaged and parent-led. We do pee-wee basketball games, pee-wee soccer and basketball league and we do about one special event a month and they range from Easter egg hunts, Halloween events to holiday events. We do cultural events like Asian-Pacific Heritage month or Latin American Heritage month where we do entertainment and food. So we try to engage all of our activities to all of the members of the community and not just kids or adult or one or the other. We also have partnerships with local organizations to use our facility, like the local Catholic school which plays all their sports here. 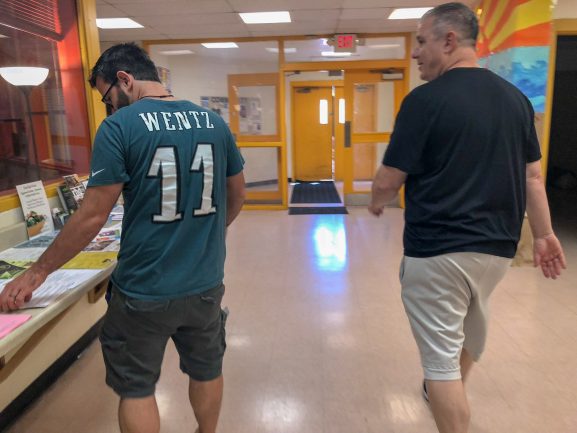 What are some problems with the center and the community that need to be addressed?

Its pretty dense. There’s a lot of new construction going on without much respect for parking. Any time there’s a zoning meeting here for community projects, there are people that are coming just to yell about parking. The older neighbors don’t really have the idea of public transportation or biking. We have a really large senior population and there’s not a lot of resources geared towards seniors. We have one senior program here and there’s a senior program in the neighborhood, but those are more like leisure things. There’s not really mechanisms in place to get seniors what they need. Some neighborhoods have programs in place where they’ll take seniors food shopping in shuttles. That doesn’t exist here. I know we have a lot of seniors that are living alone and don’t have much support.

What do you think is the benefit of having this center for the community?

Before 2015 this center was very insular. Some people used it but it was very specific and if you hadn’t been apart of the good-old-boys club, you weren’t going to get access to it. People had only seen it to vote or for things that the building was required to participate in because it was owned by the city but not operated by the city. Since the city has taken it over we have really made an effort to engage all of the community so they have a place to go in their community. Kids come to after-school and camp and other activities and we didn’t always see that. We’re all working to put a playground outside because there’s no playgrounds nearby.

What is the best part of your job?

Definitely interacting with all the people in the community and getting a chance to really get to know people. My wife hates it because we can’t go anywhere without me knowing somebody. The other part of my job I’m starting to see now is I get to see kids who are, like, 11 who I had [worked with] when they were, like, 6 in programs. And that’s only going to continue because these kids that are 11 are going to be 15 in another four years and it’s going to be mind-blowing that I’ve seen them grow up and becoming teenagers, high schoolers. Seeing that growth is of course a huge benefit.

-Text and images by Alyssa Feitzinger and Elizabeth Siegel.

[vimeo 72469489] A special daycare center, located 16-miles north of Pretoria, South Africa, opened in 2011. This center in Mabopane, operated by Lesedi La Batho, not only provides childcare but also aims to empower and motivate [continue reading…]