Immigration has long been a topic that sparks nationwide discussion. Today, buzzwords like “undocumented” and “refugee” dominate conversations around this topic. Often, the government has very specific definitions of various and words and terms.

Ironically, for one of the more controversial words often heard, there is no official or agreed upon definition.

Below you will find explanations of terms as well as the federal government source and for some entries, the local relevance.

Alien
Any person who is not a United States citizen.

Asylum seeker/asylee
An individual seeking safety in the U.S. due to fear of persecution in their home country due to their race, religion, political opinion, etc. This is similar to a refugee, but an asylum seeker must be in the U.S. when they request asylum.

Green card
A document, officially known as a Permanent Resident Card, that allows you to live and work in the U.S. Click here to learn more about applying for a green card.

ICE
This commonly used acronym stands for U.S. Immigration and Customs Enforcement, an agency under the Department of Homeland Security that is responsible for immigration enforcement. It was formed in 2003 and meant to better protect the country after 9/11.

Immigrant
Any alien who is in the U.S., except people living in the country as non-immigrants. (This is the technical definition stated in the Immigration and Nationality Act. In public discourse, immigrant may be used in varying ways — like to describe someone who has been naturalized as an American citizen). 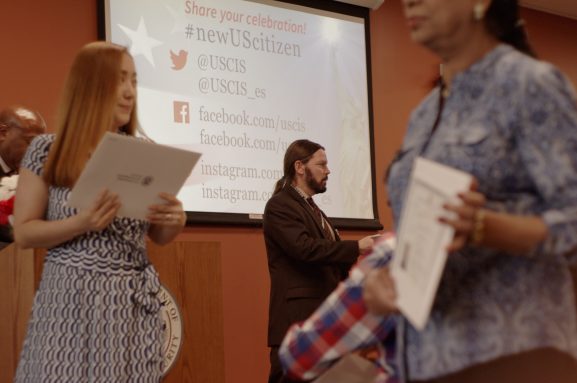 Non-immigrant
An alien seeking entry into the U.S. for a temporary period of time. There are several classifications of non-immigrants stated in the Immigration and Nationality Act, including foreign government officials, people on business or personal trips and international students.

Refugee
A person who has left their country and is unwilling or unable to return due to fear of persecution that is based on their race, religion, peers or political opinion. They become eligible for lawful and permanent residency after a year of continuous presence in the U.S. The United Nations Refugee Agency offers more details on the distinctions between migrants and refugees.

Sanctuary city
This term, though it has no official or legal meaning, generally refers to local jurisdictions that don’t fully cooperate with federal efforts to find and deport undocumented immigrants. Philadelphia prefers the term “welcoming city,” meaning that city employees are not allowed to ask about the documentation status of the people they encounter.

Sources: Vox and the city’s action guide on immigration politics

Undocumented vs. illegal immigrant
According to a document produced by the Office of Family and Community Engagement for the School District of Philadelphia, “undocumented” describes someone who has entered the country without permission. “Illegal” is dehumanizing and should be avoided.

Source: The School District of Philadelphia

Visa
A document that allows people traveling from other countries to enter the U.S. There are different categories of visas for non-immigrants and immigrants. For immigrants, visa categories range from being a U.S. citizen’s spouse to previously working for the U.S. abroad.