As the daughter of immigrants, Councilwoman Helen Gym has dedicated much of her time in public service as an at-large member of Philadelphia City Council to advocating for the city’s immigrant and refugee communities. Gym is a former teacher and organizer, notably having worked at Asian-Americans United. She is also the first Asian-American woman to be elected to City Council.

In the past, Gym has been active in the city’s Chinatown and led successful campaigns opposing the creation of a stadium and a casino in the neighborhood. Gym also co-founded Chinatown’s Folk Arts-Cultural Treasures Charter School, an elementary school that incorporates cultural traditions into its curriculum and is particularly focused on Asian-American, immigrant and refugee communities.

Gym has also long spoken out about inhumane detention and deportation practices. This past June, Gym was involved with two immigration related resolutions that passed in City Council.

The first resolution supported Rep. Bob Brady’s private bill to grant permanent resident status to undocumented immigrant Carmela Apolonio Hernández and her four children, who found sanctuary at the Church of the Advocate in North Philadelphia.

The other resolution, which was proposed by Gym and Councilwoman María Quiñones-Sánchez, calls for Governor Tom Wolf and the Department of Human Services to issue an Emergency Removal Order for the families being kept at the Berks Family Residential Center and to shut down the detention center itself.

Gym spoke about her own roots, Pennsylvania’s detention center, the practices of the U.S. Immigration and Customs Enforcement and how Philadelphia can better serve immigrant communities. 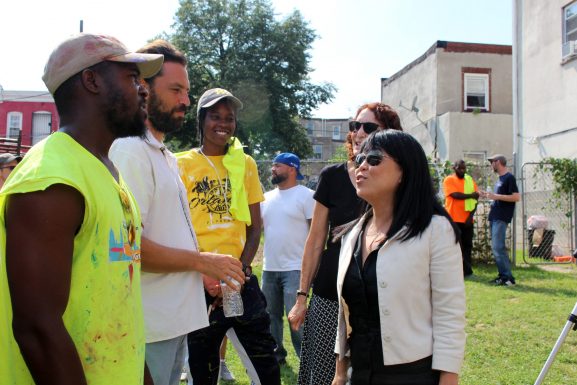 Can you talk about how growing up with immigrant parents influenced your work and how you think about policy?

When you grow up in an immigrant family, one of the first things you realize is that you build your own community and you build your own sense of family. It doesn’t come with you. My father left behind his entire family, a widowed mother and two sisters, because of the Korean War. And he’s from Pyongyang, which is in the North. And my mother left behind five brothers and sisters, only one came with her to the U.S., and so, as a result, we always had to build our own sense of community and family.

It meant that we relied heavily on public institutions for their supports because my parents couldn’t always provide all of those things. So if I didn’t have books in English at home, for example, I really relied on my public library. And because my parents didn’t necessarily have a diverse community that they were part of, I relied very heavily on my public parks and recreation centers to bring me a whole new set of community members and friends and relationships that I wouldn’t otherwise have. And I went to a great public school that gave me an enormous amount of opportunity that I probably would not have otherwise been able to get. 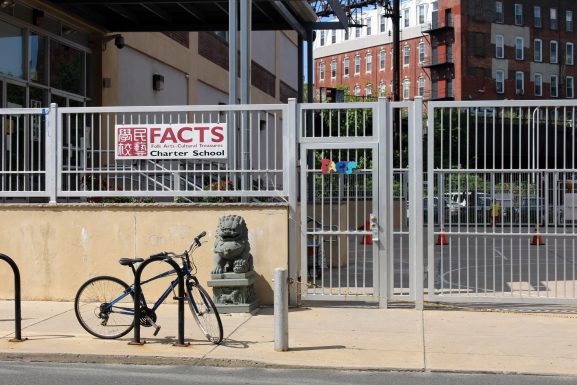 While we are on the topic of schooling, you were one of the founders of the Folk Arts-Cultural Treasures Charter School. It’s a unique mission to merge education with cultural traditions. Can you talk about how you got involved and why that was important to you?

I’m a lifelong educator. I’ve been a teacher, a teacher educator, a parent activist, curriculum writer, and for me schools have never just been about test scores and graduation days. But it’s been about the development of a whole child, how you give a child a particular sense of self. Of course being from an immigrant family and recognizing the powerful role that immigrants play in the city of Philadelphia here today, schools can be a vehicle for more than just transfer of knowledge and education and get a better test score and check all the boxes and go to college and do all this kind of stuff. But it’s really about helping immigrant communities, refugees and others make the U.S. their home. To bring in culture and language, to diversify, enrich and empower themselves as well as the city of Philadelphia. To find strength in culture and community as opposed to it being something you have to shed and leave behind in order to become fully American.

In fact, I think our country gets stronger when our populace is diverse, when its multilingual, when it has a global understanding of the world, a deep sense of empathy and connections with different parts of the world and with different experiences. It was really, really important to me that I talk a lot about what it means to have a quality education, but we wanted to prove that we could do it,. That we could build a school that embodied the kind of ideals that was serving kids with high needs, living in serious poverty that could be multiracial and multilingual and still be enormously successful. Show that schools can fulfill their missions to both serve the public and the child, to be a vehicle for communities and democracy building and the development of a child from a young, dreamy toddler to a fully realized young adult. 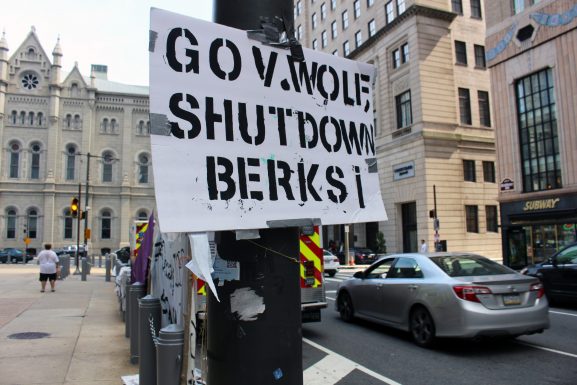 More recently, at the end of June you were involved with two resolutions that passed. One was calling for the end of the Berks Detention Center, asking Gov. Wolf to shut it down. Can you talk about why you think that’s so important?

I’ve been involved with immigration issues since coming to Philadelphia and being really active. That’s almost two decades. During that time period, we’ve really seen the evolution of immigration, the criminalization of it, mass detention and deportation efforts that actually got started over a decade ago since post-2001, post-9/11. One of the things that many immigrant activists were active around, particularly in the mid-2000s when ICE was really just starting to form, was a notorious facility called T. Don Hutto, which was based in Texas that detained families and children in abhorrent conditions. Many people around the country were very active in shutting down T. Don Hutto and raising attention and awareness to the abuses that were happening there.

The unfortunate thing that ended up happening when Hutto shut down and then reconfigured itself was that all those families that were in Texas, a bunch of them got sent to the Berks Detention Center here, just an hour away outside of Philadelphia. And for the last number of years we’ve been fighting what we believe to be another T. Don Hutto situation, which is the inappropriate and inhumane detention of families which includes asylee seekers, refugees and especially children. Very, very young children who are held in prison cells, and it is not an appropriate environment. It is not something that the state of Pennsylvania taxpayers should be paying for. We have smarter, much more appropriate options that are both humane and safe for the public and for those families that we should be pursuing. 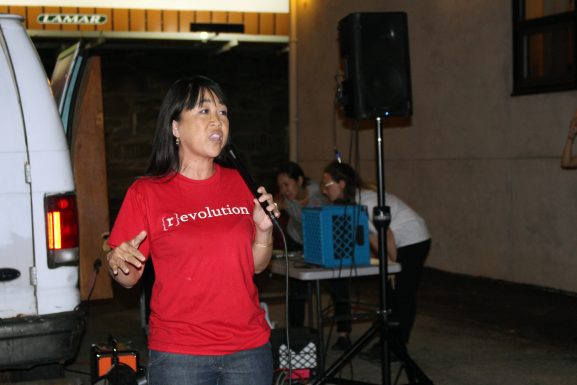 If Gov. Wolf were to shut down the Berks Detention Center, you could see something similar happening with families being transferred just to a different detention center, right?

The resolution called for Berks to close for family detention. And in fact, the governor has taken a step toward that, which is to refuse to license it as a family detention center. It’s going through the appeals process. But the second order that we’ve asked is for the governor himself to order an emergency removal of the families, which is within his right to do and just say that they can no longer be housed there. 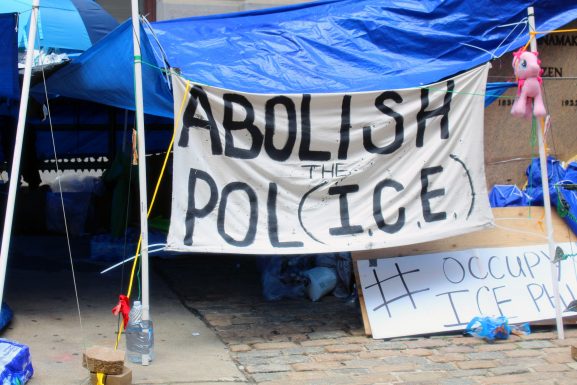 What are your thoughts on ICE? Can ICE be eliminated and if so, does anything replace it?

Since we worked in 2006 on a deportation case in which a pregnant Chinese businesswoman miscarried twin fetuses after being held in a violent deportation attempt by ICE officials, I’ve been very clear that ICE should be abolished. It is a relatively new federal agency. It was created, again post-9/11. ICE, in my opinion, is a rogue agency at this stage with agents and officers who are poorly trained, do not know the law or the Constitution or understand the limitations of their powers and frequently abuse them.

I’ve never shied away from the fact that ICE should be dismantled completely. It doesn’t mean we don’t deport or detain. It means that those processes happen under the Department of Justice in conjunction with due process and under the civil courts, which is exactly where it belongs. And we can both promote the safety of the United States and preserve the civil and human rights of individuals who come to our country to seek citizenship and a pathway into the U.S. 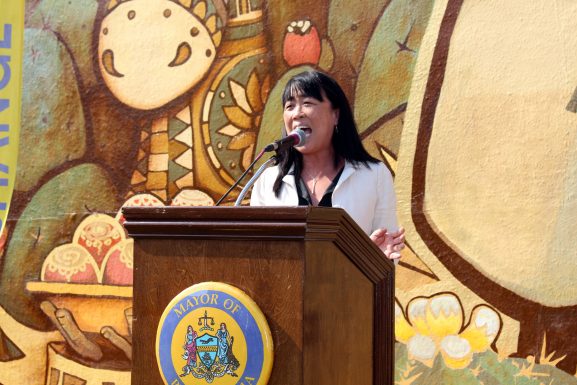 In terms of what Philly could be doing better when it comes to issues around immigration, is there anything that you would like to see get more attention?

I think in Philadelphia we can do more, and I think the state of Pennsylvania can do more. For example, I think we should be talking about expanding driver’s licenses to immigrants no matter what their status may be. I think we should be working on a local municipal ID program as long as the information can be protected from ICE and other federal agencies. I think we want to make sure that we have the fullest language capacity and language access available in all of our city departments and agencies. I think we have to do a lot to fund our public schools because that’s one of the areas in which immigrant communities actually do feel enormously safe and protected.

I think we should be doing a lot more on immigrant defense funds, providing legal defense for immigrants who potentially face deportation, especially when they’re children. I want to see and make sure that our city solicitor and our state attorney general remain strong and supportive about due process, civil and human rights issues and ensuring Constitutional protections and freedoms while we have them here. So those are among the things that I think we can try for. 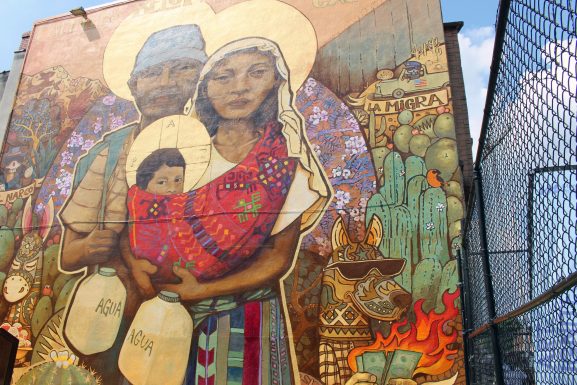 You mentioned language access. Some organizers have said that the city could do a better job with making translation services available. How does the city do that?

We have a language access mandate and what we need to do is enforce it. I think that’s one of the hardest things because the protections exist both here in the city and actually at the school district level. But I think what’s really hard is because we’re such a large city, we’re the 6th largest city in the country, we’ve got 200,000 kids in our public and charter school systems, that it is a really challenging task to make sure that each one of the 300 schools and the thousands and thousands of school district employees properly follow the regulations as they’ve been laid out.

And similarly within our city, I think we have a challenge with making sure the language access mandate is being met. It would be great to have an office that made sure that that was one of their primary charges, that could review and evaluate city agencies and departments on the quality of their language access and making sure that everybody gets it. I think there are definitely things that we can do better. I think what we do have in our favor is the commitment and the vision, and what we need is sort of the enforcement end of it.