The Germantown Artists Roundtable held their monthly meeting Oct. 3 at the iMPerFeCT Gallery on Germantown Avenue. Germantown artists and art lovers are invited to attend this meeting to meet other local artists, share their works and discuss ways to get more attention to the arts.

Paula Paul (pictured below), who has lived in Germantown since 1968, helped create the Roundtable back in 2011 with a goal of drawing attention to the arts. 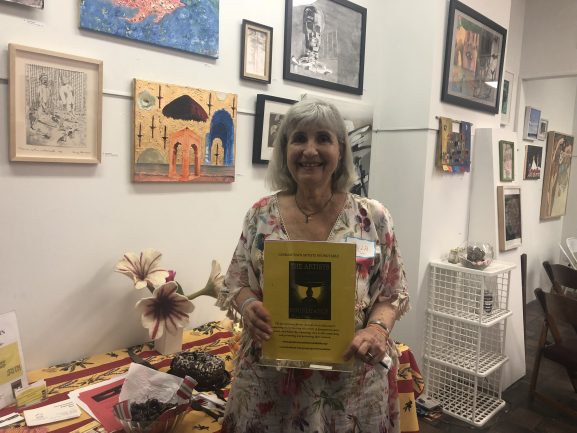 “I knew how many artists lived here and I wanted to do something that celebrated the arts because they were invisible,” Paul said. “Since we didn’t have a gallery at the time, we didn’t have an art center, but we had all these artists.”

The Germantown Artists Roundtable also runs a show called The Creative Voice of Germantown on the local low-power radio station WRLG-LP 92.9 FM. The station plays music, poetry and more, all of which is created by local Germantown residents. The show can be heard on Fridays at 1 p.m. and Saturdays at 2 p.m.

About 25 artists attended the meeting, and the group spent much of the time mingling and discussing their own art, while also inquiring about what others are working on.

Since the group is all volunteer run, many people bring juice, wine, cookies, fruit and various other treats to add to the relaxed and entertaining environment Paul created. 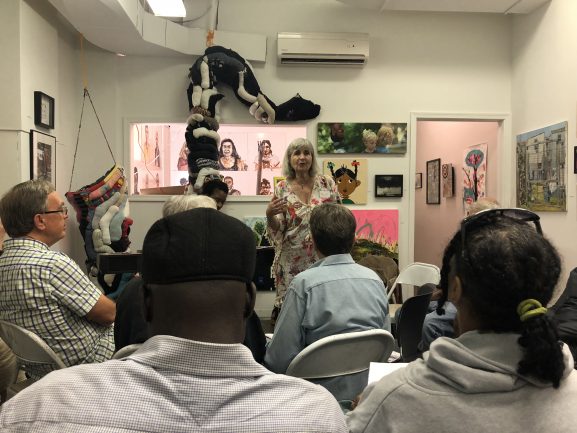 Paul then took the floor to discuss new things happening with the Roundtable and to offer up time for members to share what was on their mind, whether that be promoting their art or voicing their concerns within the neighborhood.

At this particular meeting, Joy Ike, a local folk musician, performed three songs for the group using only her voice and her piano.

“What we have in this room is an incredible group of people,” Ike said before performing. “Mainly neighbors, all art lovers.”

Ike is originally from Pittsburgh but made the move across state to Philadelphia four years ago.

“Moving to Germantown ten months ago is what made me finally fall in love with Philadelphia,” Ike said.

It’s not only the city that Ike loves, but music.

“I got into music because I loved and I love words,” she said. “I listened to a lot of folk music because there was something about the music really just falling away and it being just a voice and guitar or a piano and that always ended up being the most important thing in that type of music.”

Ike now prefers to perform at house shows rather than big venues.

“My love for music both as a listener and a performer is storytelling,” Ike said. “Being able to share the words being the music, where the songs came from, and what was really happening at that time whether it be in my life or the world around me that brought the song into existence.”

Text, video and images by Kira Runk and Elizabeth Leer.

Every Tuesday and Thursday for the past month, Jessica Ausen, the counselor at L.P. Hill Elementary School has held the homework club, an after-school program that came to light when the principal called for more [continue reading…]

The Charles Santore Library’s exterior looks like your typical municipal building — it has white walls and an architectural style that was making waves in the 1950s and 60s. In the diverse and lively neighborhood of [continue reading…]