This past August, Oneita and Clive Thompson (pictured above) received a phone call telling them something they never could have imagined: they were being deported. An Immigration and Customs Enforcement (ICE) officer left Clive Thompson a voicemail instructing him to call back as soon as possible.

“They called us on the 24th and said we had to be out of the country by the 28th,” Oneita Thompson said. “Panic is not even the word, your brain just goes every direction.”

The Thompsons, who left their home country of Jamaica in 2004 to escape gang violence, knew that they could not go into hiding, but they also could not leave their children behind. Instead, Oneita Thompson got online and found a group in Philadelphia that helped families seeking refuge called New Sanctuary Movement of Philadelphia.

The couple moved to Cedarville, N.J., in 2004, where for the past 15 years the couple has worked and paid taxes, Clive Thompson as a machine operator at Cumberland Dairy and Oneita Thompson as a nurse assistant at a retirement community in Woodstown, N.J. They have raised five children, two of which are American citizens, two legally here through DACA and one with permanent residency.

“We’ve made this place our home,” Clive Thompson said. “I never thought things would happen like this after fifteen years.”

The day they received the voicemail from ICE, Oneita Thompson called the New Sanctuary Movement and requested to speak to Peter Pedemonti, the organization’s co-founder and director.

“Peter never sugarcoated things,” Oneita Thompson said. “He explained to me that sanctuary is hard, but it’s better than being deported.” 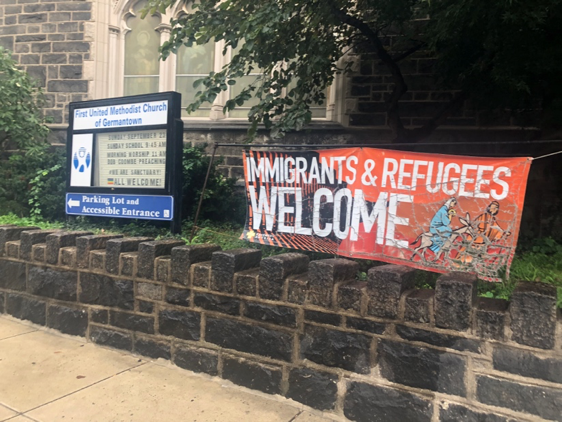 Pedemonti then made the call to one of its member congregations, First United Methodist Church of Germantown (FUMCOG). Member congregations of New Sanctuary Movement participate in trainings, workshops, campaigns, events and accompany families facing deportation.

In 1984, after taking in their first sanctuary family from Guatemala, FUMCOG became and continues to remain one of the only places of worship in Philadelphia that offers a sanctuary for those facing deportation.

Two families moved into the church at the end of the summer, said Tamie Scalise, the associate pastor at FUMCOG. The Thompsons and their 12-year-old son and 16-year-old daughter live in the drama group’s dressing room, while Suyapa Reyes and her five children, who came from Honduras in 2014, live in a room on the opposite side of the church.

The church has to do a lot to prepare for a new family. A room has to be set aside, supplies must be gathered and church staff must make plans for how to deal with ICE agents.

“When they did this is 1984, they had a year and a half to do it,” Scalise (pictured below) said. “This time, we had about a week. It has been one of the most transformative experiences that I’ve had as a pastor because you’re dealing with people’s everyday life.” 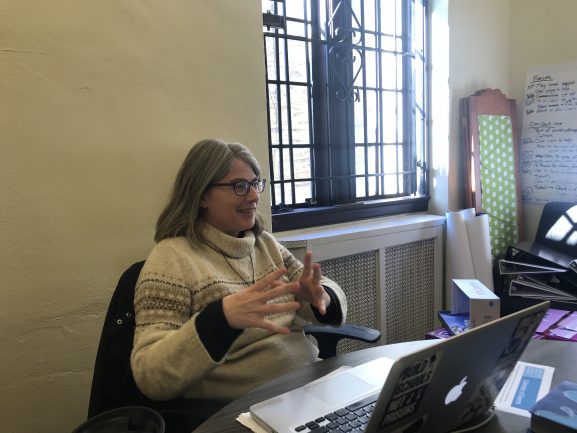 On Aug. 28, the Thompsons moved in and, a few hours later, so did the Reyes.

Because they are taking sanctuary, Oneita and Clive Thompson are not allowed to leave the church grounds and constantly worry about who may be outside waiting for them.

“I don’t even like going to the parking lot because I don’t know who is there,” Oneita Thompson said. “Days go by and I don’t go outside.”

The Thompson’s two youngest children had to leave their lives in New Jersey with only four days’ notice. They now attend school in Philadelphia.

“Breaking the news to our kids, everyone was crying,” Oneita Thompson said. “They couldn’t understand.”

It has been an adjustment for the whole family. They all sleep in the same room, sharing two queen-size air mattresses and a couch. They also share a bathroom keeping their supplies and possessions in an attached living area. The children mostly spend their days going from the church to school and back. 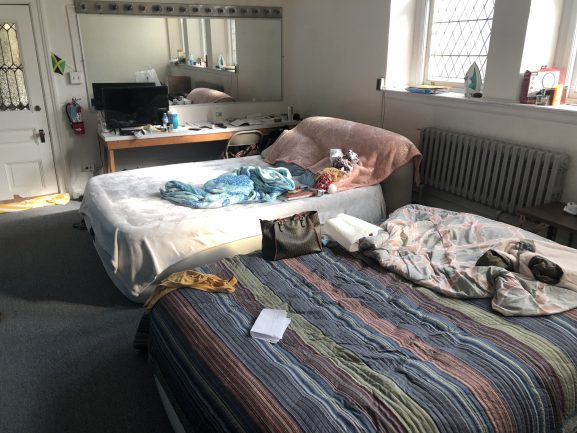 “We have always been a very close family,” Oneita Thompson said. “I think now [the children] don’t always say everything they want to say because they don’t want to put more pressure on us. Sometimes I don’t know if it’s bringing us closer.”

Director of publications for FUMCOG, Bruce McNeel, provided some background on how the church’s mission to help whoever comes through their doors.

“Now, simply, we are stepping in to provide sanctuary for families so they will not be split up,” said McNeel. “Many times their children are U.S. citizens, so they would have to stay here while their parents would be deported back to their birth country.”

The Thompson and Reyes families arrived around the same time Jeanna Murat started working at FUMCOG as the youth ministries director.

“It is important to me because as a child of immigrants, I understand the struggle,” Murat said. “The hypocrisy that is perpetuated about immigration is something that’s truly divisive within our country. To be a part of a congregation that works every day to welcome and help these families is really unique.”

On behalf of the families, FUMCOG hosts monthly fundraisers where guests can meet the families and hear their stories. Donations are always welcomed to help buy basic household products for the families. About 170 people attended their latest fundraiser on Nov. 30.

“I think people that oppose sanctuary don’t understand it,” Clive Thompson said. “People who come into sanctuary are running for safety to protect their family from deportation and find a better way to become a resident or legal citizen.”

Oneita Thompson explained why having sanctuary cities are so important:

New Sanctuary Movement provides weekly structured meetings for both families to work on the next steps in gaining legal residence.

“No matter how long it takes I am willing to stick with it because I cannot be separated from my children,” Oneita Thompson said. “I have been here for fifteen years. I am not going anywhere.”

In addition to the work being done with New Sanctuary Movement, FUMCOG has also stepped in to do what it believes is the right thing, which means taking both spiritual and political action.

“We do a lot of political work like meetings with congressmen, signing petitions and fundraising events,” Scalise said. “For us, it’s not just lets take care of them and hold them here, but how do we get them out of here. The real work is how do we help them so they don’t have to be here tomorrow. You can’t separate the political work from the justice work.”

— Text and images by Elizabeth Leer and Kira Runk.

When Isaac and Rose Miller arrived to Philadelphia in 1986, they were originally looking for a historic district to buy a home from. After seeing the Spring Garden neighborhood in a book about restored historic [continue reading…]

An immigration boom in 2000 helped turn the Baltimore Avenue corridor into a hub for African businesses. Spruce Hill has dozens of restaurants while Woodland and Chester avenues are peppered with African and Caribbean grocery [continue reading…]