Carmen Francesco (below), a community organizer for Arch Street United Methodist Church, which partners with The People’s Garden in North Philadelphia, said that the presence of vegetables in the garden that late in December is a reflection of the cultural history of the residents who tend to the space. 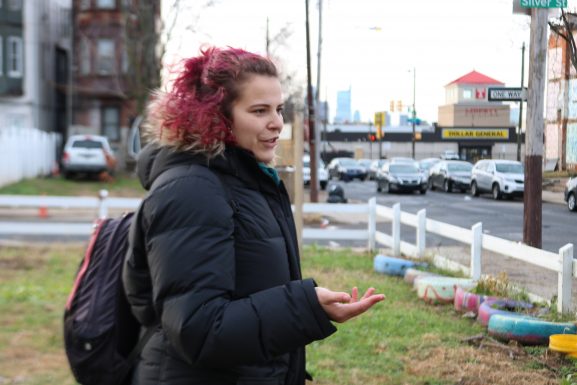 “There’s a lot of people who have knowledge of growing and have good memories of being with their parents or grandparents who could grow,” she said.

The garden (below), located at the corner of 13th and Silver streets, has been operating for four growing seasons. It began as a vacant lot, which had been sitting empty since the City demolished the three condemned houses that used to occupy the property. 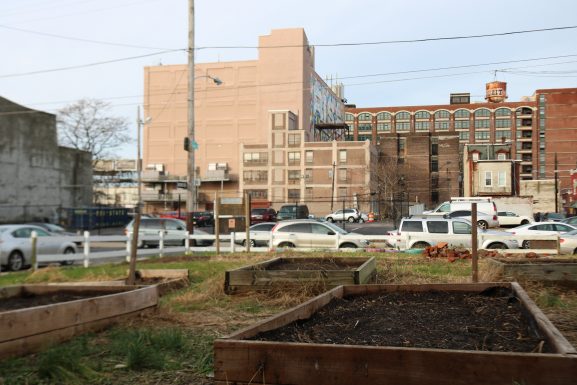 According to Francesco, the lot was filled with rubble from the demolition, as well as trash dumped by people who do not live in the neighborhood.

“That was probably one of the biggest points why they were trying to make this garden,” she said. “There was a lot of stuff in here. Needles, cracked bottles, things that you don’t want kids to play around in.”

The People’s Garden is one of several similar green spaces North Philadelphia. In addition to uniting communities, they serve to address two problems plaguing the neighborhood: blight from vacancy and food insecurity.

Philadelphia is home to approximately 40,000 vacant lots, according to the City of Philadelphia’s Community Life Improvement Program (CLIP). Approximately 75 percent of lots across Philadelphia are privately owned, while the rest are owned by the City.

They are especially common in North Philadelphia, according to Keith Green, associate director of Pennsylvania Horticultural Society’s LandCare. The program stabilizes overgrown and littered lots by clearing them of weeds and trash, planting grass and erecting wooden fences.

“One third of our land is in that North Philadelphia area,” Green said. “It’s probably a little more than that, actually.”

Green said a significant number of private lots in Philadelphia are owned by developers who live in other cities. Those developers, according to Green, buy cheap land and wait for property values to rise in order to then flip the lots for profit.

“I’ve seen a lot of people from New York actually own property citywide, believe it or not,” he said. “That’s a problem because of the fact that, if you don’t live here, you don’t see the impact of what these lots not treated has in the neighborhood.”

“There is a lot of dumping, that trash is accumulating, and it’s getting blown around by the wind and there’s decomposing, whatever sort of perishable waste in there,” Monteiro said. “Vermin are going in and out of there to feed off what is there. It’s all just attracts nuisance behavior and other conditions that are objectively unhealthy.”

Vacant lots also have psychological effects on the community, Green said, and discourage residents from leaving their houses to engage with their neighbors.

“It gives a negative feel to the neighborhood when you walk out,” he said. “Like just think about it, if you have to walk out of your house every day and you see trash and debris dumping, what type of effects it would have on you, like just mentally.”

He pointed how it can affect just wanting to be outside in the neighborhood.

“You don’t want to sit outside on your stoop, you can’t walk on the sidewalk because nine times out of 10 if the grass is high on a lot,” Green added. “It’s also high on the curb side because no one’s maintaining it.”

Empty lots, however, have potential to benefit neighborhoods, especially when converted into green spaces.

Greening vacant land is linked to significant reductions in gun assaults and vandalism, according to a study by University of Pennsylvania’s Perelman School of Medicine. Residents who live near greened land reported significantly less stress and more exercise.

And when vacant lots transform into food-producing gardens, they offer nutritional benefit to the Hunting Park and Fairhill neighborhoods.

Historic Fairhill, a neighborhood revitalization organization in North Philadelphia, acquired a small lot on North Hutchinson and West Auburn streets, for the Hannah House garden, where it built plots to grow fruits and vegetables. 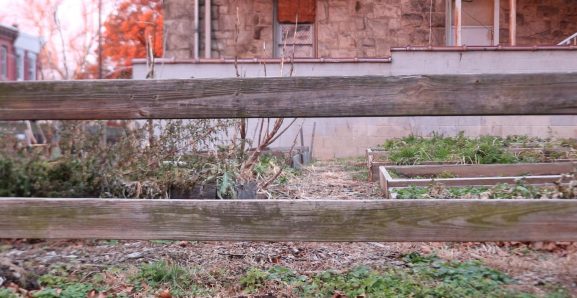 The Hannah House garden (above) and Fairhill Cemetery garden together yield about 1,500 pounds of fruits and vegetables in one harvest year.

The garden’s main goal is to provide produce for the community, said Amy Mares (below), Historic Fairhill’s program coordinator. The organization hosts a farm stand that distributes the gardens’ harvests and other food donations. 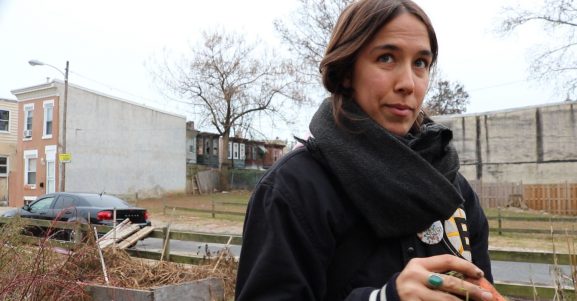 The neighborhood struggles with food insecurity, Mares said, and grocery stores with produce are not easily accessible. Fairhill residents who don’t have supermarkets near their homes often resort to buying groceries at bodegas throughout the neighborhood, which sometimes do not supply fresh produce.

Corner stores have items that are high in sugar, salt and fat, said Sophia Delgado, 18, who lives in Hunting Park and works at the Providence Center, a community center on North Fifth Street, which offers English classes and services for the majority-Hispanic community of Fairhill.

“It’s sad how hard it is to get healthy food around here,” Delgado said. “It messes me up because since I was younger I always struggled with my weight. Two years ago I was 180 pounds, about to hit 200, and I’ve been losing weight. But it’s just been so hard because there’s really nothing healthy to eat around here.”

To fill the need for fresh produce, Philabundance, in partnership with HACE, the Fairhill Community Development Corporation and local community organizers, provide free fruits and vegetables to hundreds of neighborhood residents every Wednesday at the Lillian Marrero Free Library at Sixth Street and Lehigh Avenue. 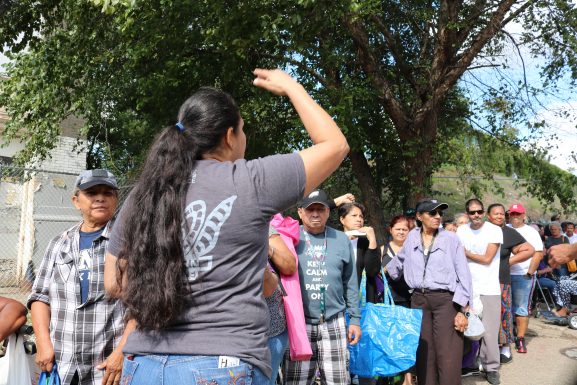 The Philabundance Fresh For All Market assists many elderly residents of Fairhill, some pictured in line above, who cannot travel far for their groceries or struggle to afford grocery store prices on their fixed incomes of social security and welfare checks.

“I was so happy that they’re doing stuff like that because I can’t tell you how many families I’ve come into contact with that it’s rare for them to each vegetables,” Delgado said. “And I’m saying like, good vegetables … like actual kale and different vegetables.” 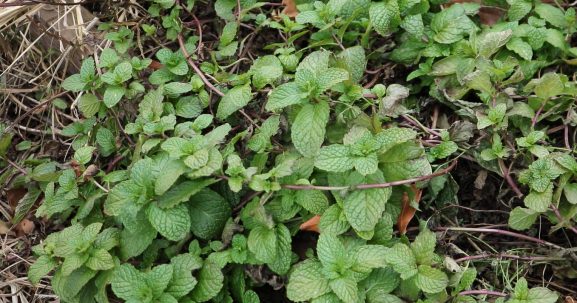 The Hannah House and Fairhill Cemetery gardens bore produce through December. Mares pulled large carrots out of the soil and picked mint (above) at Hannah House, and dug up sweet potatoes at the cemetery, where a family stopped to accept the largest potato she found.

“All the produce here is distributed to the community,” Mares said. “It’s not taken anywhere else, and people know that they are welcome to come in here, it’s their garden.”

The gardens also offer job opportunities for neighborhood youth, said Mares, who works in the literacy program at Julia de Burgos Elementary School on West Lehigh Avenue. Historic Fairhill hires paid summer interns, and for many of them, tending and harvesting the gardens is their first job.

“Providing this kind of first employment opportunity is really fun to participate in,” Mares said. “It’s really great and it sets the standard for them. They’re like ‘OK, this is how I should be treated as an employee. This is a model for a relationship that could exist in the workplace.’ And also, they’re working with organic vegetables.”

Organizations agree that, in addition to the many benefits to nearby residents, stabilizing and beautifying lots can also make vacant land even more attractive to outside developers.

“When sites are clean and green, they allow people to see the potential of what could be there,” Green said.

Francesco said North Philadelphia has seen more development than ever in recent years, as private deals take place in lots surrounding The People’s Garden. However, this could pose a significant threat to the site.

The People’s Garden, like similar green spaces throughout Fairhill, operates on “reclaimed land,” meaning the Arch Street United Methodist Church does not officially own the property. Front Step, a faith-based nonprofit organization that serves the Stenton Park neighborhood, gives the People’s Garden permission to work on the property. But Francesco said it’s unclear whether the organization officially owns the land.

“There’s some complications between the City and them,” Francesco said. “We do know that there’s over $200,000 worth of liens and debt on this property.”

If the owner decided to sell to a developer, the church would have no stake in how the land is used.

City Council established the Land Bank in 2013, intending to simplify the process of transferring properties from public agencies to private owners. The Land Bank also acquires privately-owned vacant parcels, clears them of liens and sells them to new owners.

According to the Land Bank’s 2017 Strategic Plan, the agency “intends to continue to work with our horticultural partners to support the use of vacant land for various agriculture uses and encourage additional gardens.”

However, according to Francesco, when The People’s Garden attempted to work with the Land Bank to buy its own property, they were not successful.

All elements of the garden, including the plant beds and water catchments, are temporary. They can be quickly removed and stored elsewhere if the City or a private developer takes over the land.

“I don’t think anyone really knows what to do,” she said. “So that’s where we are. We’ve always known we’ve been growing on reclaimed land. We believe that’s our community right.”

For now, the garden is seen as an asset to the neighborhood. It doesn’t just provide produce, it empowers and unites residents, Francesco said.

“We are a community organizing initiative at its heart,” she said. “This growing is great and it’s part of our purpose, but our main purpose is really bringing the community together.”

-Text and images by Greta Anderson and Brianna Baker

When the Emerald Street Park received a grant earlier this month from the Pennsylvania Horticultural Society, the emphasis was put more on its value than the actual dollar amount. “The project’s worth is not something [Read More]

Art is something that is a mainstay in Fairhill. From graffiti-covered buildings to walls adorned with murals, the controversial yet strikingly beautiful expressions can be found almost anywhere. HACE, a nonprofit organization attending to the [Read More]