Years of planning and hard work went into the creation of the newly opened Venice Island Performing Arts and Recreation Center in Manayunk. 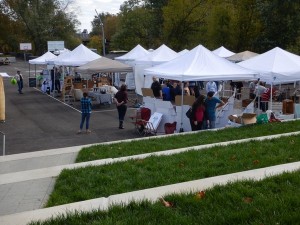 An outdoor craft market of about 60 start-ups, home businesses and other do-it-yourself ventures, Philly Mart operates on the grounds of the $45 million project.

“We look for vendors that are unique and maybe haven’t done a lot of markets,” said Philly Mart co-founder Renee Pedro. “We want to make sure they appeal to us, but also we need them to be appealing to customers.”

A joint effort of the Philadelphia Water Department, the Parks and Recreation Department and the Manayunk Development Corp., the Venice Island project took 10 years – plus one unique marriage of aesthetics and practicality – to complete.

Needing a way to stave off troublesome storm water from the nearby Schuylkill River, the Water Department constructed a lake-sized, 4-million-gallon underground water tank and pump station below the performing arts center.

Above, Venice Island’s former playground, crumbling from repeated flooding, was replaced with a $4.5 million, 250-seat amphitheater. Offering both outdoor and indoor space, it will be used for theater, dance, music, special events and other performances. 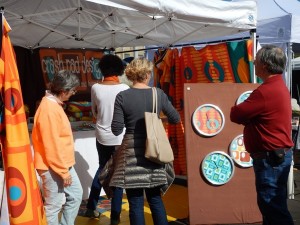 Pedro and fellow co-founder Kiersten Watson Lenat wanted to curate a market that was different from any other, Pedro said.

After patiently waiting for Venice Island to be finished, they found a venue to share that quality.

“The location is so unique to Philly, that’s why we wanted it,” said Pedro, a textile designer from Roxborough. “The city has been very cooperative with us and they love the idea of the Philly Mart here. They love that it can be a great community gathering spot that supports local art.”

Megan Gibson, owner of the all-natural nut butter business PB and Jams, has been pitching her product for almost two years.

“It’s very helpful for me to be able to have face-to-face time to tell the product’s story and describe the product,” said Gibson (below). 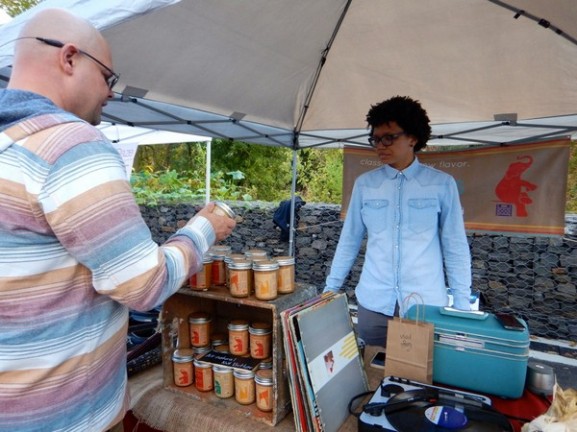 Gibson said the scenic backdrop was an added bonus.

“I think it’s really cool,” Gibson said. “It’s in a perfect spot right off the river. It looks amazing.”

Seeing the space for the first time, Chase Brown made the trip from Cheltenham Township to showcase his ceramic flask business, Wrong World Ceramics.

Brown got the idea for making the flasks after he created a few for an art show and they generated a huge response. 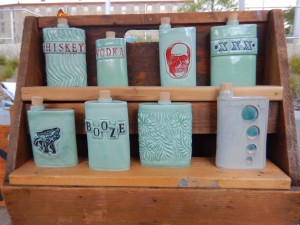 “I made a few of them just to try it out,” Brown said. “I had a really positive response to it, so I stuck with it.”

Pedro said that while Saturday’s turnout was impressive, business will no doubt pick up as more people get word.

“It’s going to turn out to be great for Manayunk and great for the city in general,” said Pedro. “We’re excited to see it happen.”

Text and images by Nodyia Fedrick and Joe Dolinsky

https://vimeo.com/89552932] Tucked away on a quiet side street in the Fairhill neighborhood, the Spells Writing Lab sits along the colorful 2500 block of North Alder Street. Mosaic tile and elaborate murals grace the walls of [continue reading…]

Roxborough: The Progressive “Sanctuary of Peace”

Mishkan Shalom was founded with the intention of providing exactly what its Hebrew name declares – a ‘sanctuary of peace’ for individuals from diverse backgrounds to join together as a unified community. The congregation originally [continue reading…]