The White House designated part of West Philadelphia as one of five Promise Zones one year ago this January. The designation will last for another nine years, but while most organizations involved look positively on the first year, some Mantua residents are less impressed.

With help from the Byrne Criminal Justice Innovation grant, the Philadelphia police force and the Mt. Vernon Manor nonprofit organization, authorities are addressing the high crime rate with an increased police presence. Drexel University and the William Penn Foundation also hope to make an impact the community will see in the neighborhood starting with early childhood education. Still, some say they haven’t really seen anything tangible happening, nor do they feel well informed of the potential changes.

Background on the Promise Zone

In the 2013 State of the Union address, President Barack Obama professed the White House’s dedication to improving the lives of those in struggling communities. This led to the designation of the first round of Promise Zones in San Antonio, Texas; Los Angeles; southeastern Kentucky, the Choctaw Nation of Oklahoma; and Philadelphia.

The White House’s Office of the Press Secretary released a Fact Sheet: President Obama’s Promise Zones Initiative stating the key strategies for West Philadelphia, which include instituting incentives for education on entering work forces and programs to provide jobs for residents; improving the quality of education, specifically mentioning Drexel University and the William Penn Foundation; and preventing and reducing crime.

The designation does not mean Mantua will receive direct federal money. Federal agencies will help cut the red tape, give preferences to Promise Zones for grants and give tax incentives to those communities, pending Congress’ approval.

Like many Mantua residents, Jill Gorden said she has not seen any real change from Promise Zone efforts, except police presence.

“You used have people selling drugs on the corners and stuff, and you don’t really see that too much anymore,” Gorden said. “And if you do, the cops are right there. I think that has a lot to do with the up-and-coming gentrification.”

The Philadelphia Police Department declined to comment, instead referring questions to its key partners, including Donna Griffin from Mt. Vernon Manor.

In 2012, the U.S. Department of Justice awarded Mt. Vernon Manor a planning and enhancement grant to assist the Mantua community with the BCJI efforts. They then developed a 36-month strategic plan for public safety. This led to the city’s Office of Housing & Community Development and Philadelphia Housing Authority receiving a Choice Neighborhood grant from the U.S. Department of Housing and Urban Development, which awarded $30 million to the city along with an invitation to apply to the Promise Zone program.

A survey of residents conducted by Mt. Vernon Manor indicated that drugs and gang violence had been an issue in Mantua for quite some time. The organization found eight crime hotspots based on police data statistics within Mantua. They focused on crimes like homicide, shootings and gunpoint robberies to identify these hot spots. They looked to a new plan to solve this problem.

“The community really felt like, hey, you know what, arresting people has not been an effective solution to reducing crime,” said Griffin, “and what we need to do as residents is take more responsibility for public safety.’”

Mt. Vernon Manor has used a community-based approach, keeping people motivated to make the community safer with its block-by-block program, building the capacity of individual block leaders. The community reports crime and patrols the streets in order to stay aware and alert authorities, which has reduced crime in the area.

“One thing I can tell you is in 2014 there have been zero homicides,” said Griffin. “When we actually wrote the grant (2012) there were four, and a large number of shootings. I can’t even tell you how many shootings.”

Griffin did not want to publicize the new police strategies for fear they would become ineffective if made public. The organization has a little more than a year left of implementation to make the plan sustainable for the future.

Before the designation, Drexel approached William Penn in summer 2013 to increase its involvement in the community around Drexel, particularly in early childhood education and elementary schools. Drexel already had been working with the community in career training, high school programs, summer programs and after-school programs, so this seemed like the next logical step.

“They’ve sort of been working their way down the age range, if you will,” said Elliot Weinbaum, director of the William Penn Foundation’s grantmaking programs.

William Penn gave Drexel a planning grant in November 2013 to assess the early childhood education situation in the surrounding Promise Zone. Drexel spoke with community members about the opportunities for accessing high-quality early education. Within five months, Drexel came back to the foundation with the results of this study.

“They learned that there are about 1,200 children ages 0 to 5 in the communities right around the university,” Weinbaum said, “and that 75 percent of those children in the neighborhood were in child-care settings that were either in low quality or unknown quality.”

In speaking with residents, Drexel found that families are interested in high-quality early education but did not have the opportunity to send their kids to those kind of programs within the community. This led to a larger grant to Drexel last July for a three-year initiative to improve access to quality care through 23 participating child-care providers in Promise Zone areas.

Within three years, Drexel hopes to have half of the community involved in high-quality early childhood education, which has attracted the interest of organizations like the People’s Emergency Center, Mantua Civic Association, the Children’s Literacy Initiative, We Are Mantua, the Delaware Valley Association for the Education of Young Children, the United Way and the Local Initiative Support Corp. (LISC).

The Philadelphia office of LISC has combined governmental, corporate and philanthropic resources to support the community for over 33 years. In the last eight years, it has taken more initiative in the West Philadelphia area.

“As part of our work in helping community-based organizations with revitalizations,” said LISC executive director Andrew Fishkoff, “we’ve increasingly engaged Drexel and [the University of Pennsylvania] in particular, Children’s Hospital [of Philadelphia] to a lesser extent, as partners in improving neighborhoods and the quality of life for residents.”

LISC worked with community groups and government agencies to both plan and implement programs to help the community. Fishkoff explained even though they had started the improvement of early childhood education with Drexel and William Penn before the Promise Zone designation, the designation will help the organizations succeed. He feels the Promise Zone has brought the motivation for organizations to come together.

This still does not provide a tangible achievement for the community to cling on to, which may be part of the reason residents complain the designation has not brought any change. Some residents are still apprehensive about the university involvement specifically.

Optimistic about the future relationship between the university and residents, Fishkoff said Drexel wants to be a good partner and help the community succeed.

“There is mistrust and there is often misunderstanding,” Fishkoff said, “and it’s not that LISC is perfect in figuring that out, but we don’t own property. We work on behalf of the community with the institutions. So part of our job is to work so that they will be good partners, and that they will share information with each other, share knowledge with each other. We can build the trust and break down the mistrust.” 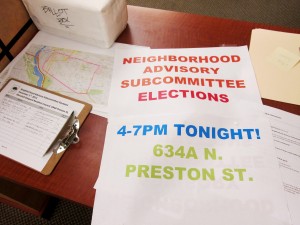 Residents make up this volunteer advisory subcommittee to determine the community’s needs, plan four events per year, execute them and develop plans to improve the neighborhood. The leaders, voted on over the past month, will receive leadership and fundraising training. In total, 103 residents voted on the 15 residents nominated for the leadership positions.

“The residents in the neighborhoods we serve are quite informed. We benefit from having many active resident-run civic associations and projects in our service area,” said Ariel Diliberto, NAC coordinator for PECCDC. “Additionally, we now have over 100 ‘Drop Spots,’ which are neighborhood residents who volunteer to distribute materials on new programs and opportunities to their block.” 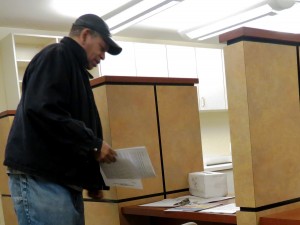 The NAC contract serves the area from 31st Street to 48th Street and Market Street to Girard and Mantua avenues. The PECCDC drops off materials once a month to those who sign up for the Drop Spot program in the area. This insures those without Internet access or a cellphone can still get information about the Promise Zone.

Cathy Black, a volunteer at the subcommittee voting poll on 634 N. Preston St. on Dec. 5, said that she wouldn’t have known about the community meetings if she didn’t live down the street from where they were held. She also said many people from her development didn’t know there were meetings until she informed them herself. Some people without Internet access find it even harder to stay informed.

In regards to the future of crime-fighting in the Promise Zone, Griffin said that she hopes the work the BCJI grant is doing in Mantua can be replicated in other parts of the Promise Zone where they are looking at crime hotspots. She agrees with the consensus that the communication needs to be constant with the community.

“We have been really intentional in going out and presenting information on what the Promise Zone is,” said Griffin. “Because today there aren’t any dollars associated with the Promise Zone, people find it a little challenging to understand what it is about. Residents need to kind of see it, feel it, touch it and so those kind of things don’t exist today, and its been difficult.”

The Promise Zone stimulates the work done by Drexel University along with the William Penn Foundation. Weinbaum said the Promise Zone has brought up some important topics.

“You know, I think it’s brought a bunch of momentum and focus to some important issues including education, clearly,” he said. “I think it’s in the planning stages though. I think, as I said, it’s started a bunch of important conversation related to that.”

The Mayor’s Office of Community Empowerment and Opportunity, which oversees the program, works hard to eradicate the poverty in the community, creating a foundation for improvement to the neighborhood.

The agency’s executive director, Eva Gladstein, told The Philadelphia Inquirer in November that “the challenge is that we’re still a desperately poor city.” Poverty in Philadelphia affects 397,000 people, 123,000 of whom are children, she said.

Both organizations and residents said if there are dramatic improvements from the Promise Zone designation, they will only be seen over time. Some of the things the White House addressed are beginning to improve, but there is one thing still up in the air – tax credits.

“[The bill] did not pass, so we have no tax credits,” Fishkoff said. “New Congress will start in 2015, and if I were a betting man, I would not bet that we will have tax credits in the next few years. But we’ll see.”

This would have opened up jobs encouraging businesses to hire within the community. But without Congress’ approval, they will never be part of the Promise Zone benefits. It could be the last piece to the puzzle to getting tangible improvements the community wants.

The Guerrilla Ultima food truck mixes different cultures into a unique BBQ style. It’s located right outside of Yards Brewing Co. at 901 N. Delaware Ave., every Sunday from noon to 4 p.m. The owner of [continue reading…]